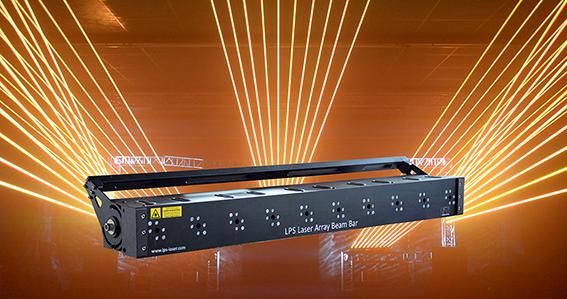 In the event industry, there are countless popular laser show devices to create exciting laser effects. Thanks to their technical features and varied effects, they can be used flexibly visually. Depending on the equipment, they can produce single color and multicolored laser beams, they are dimmable and stage different colors and sometimes patterns.A very special laser show effect, the famous icing on the cake, is certainly a laser bar, as the LPS Laser Array Beam Bar – also called LABB. This beam bar comes from the company LPS laser systems and has already been used internationally for some interesting events and festivals. White light laser beams, which allow full-color RGB beams in any desired color (16.7 million colors), can be issued over ten laser outputs. The separate control also allows to color each single beam individually and dim them as needed. Thus, the lighting operator has no color restrictions for its stage light art, which can happen quickly with monochrome bars. With 31 channels, the LPS Laser Array Beam Bar can be easily operated via DMX512 when connected to a light console such as GrandMa, Avolites, Chamsys or any other. The design of the IP54 housing is timelessly modern and impresses with just 15 kg at a size of 100 x 10 x 22 cm (l x b x h). In addition to key switch and interlock, safety is also provided by an e-stop. Thanks to the ironing holder, the laser bar can be perfectly attached to traverses, whether horizontally, vertically, diagonally or individually.Whether as a highlight or a complement, whether as a ground effect that runs like a fan parallel to the ground, or like a beam tunnel from top to bottom and vice versa, the LPS Laser Array Beam Bar conjures up mystical effects. As a versatile and varied laser bar, manufactured in Germany, it is often used to complement major stage scenes at festivals, concerts and tours of world stars. The applications for professional lighting designers are almost unlimited, as the LABB is perfectly suited for stage sets in theaters and operas, in leisure parks, at TV shows and, of course, at any other event such as trade fairs, fashion shows, anniversary parties and so on. The LPS Laser Array Beam Bar is available in 3W RGB. Each laser beam has 300mW RGB. With fantastic divergence, the beam quality remains the same and the laser beams are thus visible at a long distance. Thus the laser bar also generates impressive laser beams and laser grids, depending on the arrangement and number of laser bars.LABB is probably one of the most reliable laser bars currently on the market. With LPS laser, it can not only be bought, but also rented comfortably, also as DryHire. This, and also its equipment, are just a few reasons why it is becoming more and more popular with professional lighting designers.Founded in 1993, LPS Laser Systems is a leading manufacturer of premium laser show systems, laser shows, software, modules and important partner at multimedia events worldwide. With its headquarters in Ofterdingen, South-West Germany, LPS is setting standards in customized laser projects. The dynamic LPS employees implement their ideas, their passion for perfect laser shows and systems. Well-known adventure restaurateurs, event agencies and operators of theme parks, decision makers of various institutions and governments, as well as other laser show providers around the world trust the company. The existence of more than a quarter-century of the company LPS Laser Systems is evident in many respects. The result of experience and implementation skills, specifically harmonized, are varied, color-brilliant laser shows at major events of all kinds, reliable laser show systems that are rented and purchased around the globe and not least: satisfied customers worldwide.LPS-Lasersysteme Siegmund Ruff / CEO Haidschwaerze 18 72131 Ofterdingen s.ruff[at]lps-laser.de Phone: +497473271177 www.lps-laser.com

11-21-2018 | Advertising, Media Consulting, …
LPS-Lasersysteme
100 Years Hermann Bantleon GmbH. A fantastic celebration with laser shows
Hermann Bantleon GmbH is a well-known manufacturer in the global petroleum and lubricant industry, with further expertise in cleaning, corrosion protection, separators and abrasives. In 1918, the company was founded by Hermann Bantleon and Richard Umbach in Ulm, Germany. The name "Hermann Bantleon GmbH" was a result when the second founder leaved the company in 1940. Hermann Bantleon rebuilt the destroyed company after the war and set the course for
09-28-2017 | Leisure, Entertainment, Miscel …
LPS-Lasersysteme
Black Sea Arena in Georgia extended laser shows and water fountains
A special engineering, striking architecture and exceptional design – these points describe the Black Sea Arena in Shekvetili, Guria, Georgia. It is located at the Georgian Black Sea and offers space for varied events. The Black Sea Arena and the accompanying, complete outdoor planning was constructed by the architectural firm DREI ARCHITEKTEN from Stuttgart, Germany, and finished in 2016. The arena includes an Amphitheatre for 10,000 spectators. In case of
06-28-2017 | Leisure, Entertainment, Miscel …
LPS-Lasersysteme
Software for professional laser shows and multimedia events
Laser shows are considered to be breathtaking highlights at various events such as festivals, concerts, tours, musicals, TV shows and more. Performed in single colour, such as in laser projectors using only green laser modules, or with the more popular show laser systems in RGB, that use the complete visible colour spectrum (16.7 million colors) by precise adjusting of the individual colors red, green and blue. Fascinating laser shows are often
03-29-2017 | Arts & Culture
LPS-Lasersysteme
Laser show 2.0 – that spectacle in Austria’s mountains
Tyrol – known for its unique natural beauty, a place where many tourists like to spend their leisure time. Throughout the year, the heart of the Alps is a magnet for young and old, visitors who like sports or enjoy just the beautiful nature. The popular holiday resort of Serfaus in Austria is particularly striking. Of course, it inspires its guests with the known and very nice Tyrolean hospitality, its