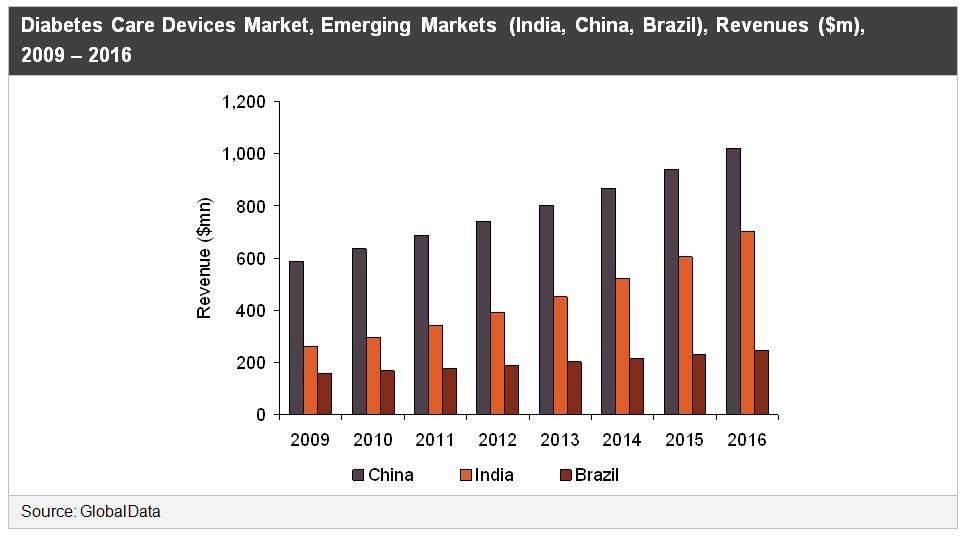 GlobalData’s new report - Diabetes Care Devices: Emerging Countries (China, India, Brazil) Opportunity Assessment, Competitive Landscape and Market Forecasts to 2016 - provides key data, information and analysis on the diabetes care devices market in China and India. The report provides market landscape, competitive landscape and market trends information the diabetes care devices market. The report provides comprehensive information on the key trends affecting the market, and key analytical content on the market dynamics. The report also reviews the competitive landscape, key pipeline products and technology offerings. This report is built using data and information sourced from proprietary databases, primary and secondary research and in-house analysis by GlobalData’s team of industry experts. The Diabetes Care Devices in Emerging Markets to Grow due to Growing Number of DiabeticsThe combined diabetes care devices market for China, India and Brazil was valued at $1 billion in 2009. The growing prevalence of diabetes in emerging countries of India, China and Brazil will increase the demand for diabetes care devices in the coming years. Diabetes and other lifestyle diseases are set to replace infectious diseases and malnutrition as the main cause of morbidity and mortality in emerging countries. Lifestyle changes are increasing the prevalence of chronic, non-communicable disease like diabetes at an alarming rate. The WHO predicts that India and China will respectively lose $237 billion and $558 billion of their national income to diabetes and cardiovascular disease between 2005 and 2015. The governments of Brazil, India and China have recognized this growing epidemic and have now introduced measures to increase awareness and add treatment centers to treat diabetes. This will lead to growth in the utilization of glucose monitors and insulin delivery devices for diabetes management.Patient Convenience to be a Major Factor in Choice of Diabetes Care DevicesRecent advances in insulin pens, jet injectors and continuous glucose monitors (CGM) has made diabetes care devices less invasive. Quality of life has become a significant factor in defining the patient’s choice of diabetes management devices. Non-compliance among patients is a big concern due to the discomfort caused by the old generation devices. For instance, blood glucose monitoring devices are associated with considerable discomfort caused by finger pricking for the extraction of blood. Insulin syringes require vials and mixing of fast acting and slow acting insulin in the correct ratio which would be difficult for patients who are old or visually impaired. Insulin syringes are also associated with pain at the site of injection, usually in the lower abdomen. This has led to a greater use of insulin pens and the development of novel devices for use by patients who lack manual dexterity or suffer from visual problems. As living standards rise in the emerging countries, patient affordability for pens and jet injectors increases, leading to greater adoption of these devices over traditional insulin syringes.Increased Government Programs for Diabetes Care AwarenessGiven the size of the population in emerging countries, there is a growing body of evidence that the cost of diabetes to these countries can be reduced through education. The emerging countries of India, China and Brazil have started large scale awareness programs to educate the general population about the growing epidemic of diabetes. The Chinese awareness program started in November 2004 with a projected budget of $2.6m and was targeted at 8,600 healthcare professionals, doctors and nurses from 36 cities and 300 counties. Doctors and healthcare workers were taught about the National Diabetes Prevention and Treatment Guidelines which are aimed at improving diabetes care in China. Brazil, which started a National Awareness Program in the late 1980’s, aims to improve diabetes treatment in 51 low-income medium sized cities across Brazil. India has yet to start an awareness program, but has identified it as one of the key steps the government needs to counter the growing diabetes epidemic. Diabetes awareness programs are essential in increasing the understanding of the disease and have helped in the prevention and diagnosis of the general population. Awareness is set to encourage more people to use diabetes care devices to test and better manage their diabetes.India to be the Fastest Growing Market for Diabetes Care Devices in the near FutureIndia will be the fastest growing market in the diabetes care devices market. With a large undiagnosed and diagnosed diabetes population, India is expected to be the diabetes capital of the world in the near future. China and Brazil which have implemented National Awareness programs and Guidelines towards the treatment of diabetes will see a consistent growth in the market over the next seven years. Although considerable numbers of elderly patients prefer alternative ways to treat their diabetes, a growing middle class in these countries will be able to afford previously unaffordable new technologies such as insulin pumps and artificial pancreas. With the entry of local companies, price are expected to come down, leading to market penetration of these devices from urban patients to rural patients.GlobalData: Diabetes Care Devices: Emerging Countries (China, India, Brazil) Opportunity Assessment, Competitive Landscape and Market Forecasts to 2016: http://www.reports-research.com/studien/diabetes-care-devices-emerging-countries-china-india-brazil-opportunity-assessment-competitive-landscape-market-forecasts-2016-p-111161.html GlobalData: More market data and market reports: http://www.reports-research.com/studien/globaldata-m-304.htmlmarkt-studie.de, founded in 2002 has emerged as a leading online portal for market surveys and market research in German speaking areas. Four years later the English language portal reports-research.com was introduced due to the extraordinary success of the portal. Again one year later estudio-mercado.es - the Spanish spoken portal - was founded. The objective of the three portals is to competently and efficiently support consultants and decision makers in management, sales and marketing in the search for worldwide market research. Prospective buyers can look into more than 60,000 market surveys from more than 200 international publishers, current market data for more than 6,000 branches worldwide, 10,000 company profiles as well as a free-of-charge research and recommendation service for individual market research.reports-research.com c/o dynamic technologies GmbH Siegburger Str. 233 50679 Köln GermanyManuel Bravo Sanchez (CEO)info@reports-research.com or Tel ++49 (0)221 677 897 32 Fax ++49 (0)221 677 897 34

You can edit or delete your press release GlobalData: Diabetes Care Devices Market to 2016 on reports-research.com here