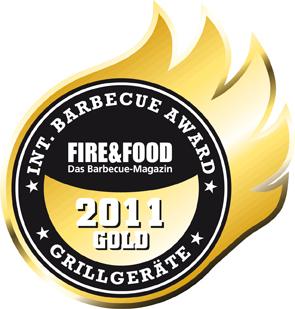 Weingarten (ehr) - Barbecue – a global trend in a booming market segment. A growth market, subject to important stimuli, thanks to the potential for innovation within the market. A prize for innovation – initiated and organised by FIRE&FOOD, Europe’s N°1 grill and barbecue magazine – has been awarded since 2004. This prize, awarded up until 2008 in co-operation with the Koelnmesse trade fair, has now established itself internationally in the grill and barbecue industry. Both large and small companies, as well as individual inventors, have already received the coveted award. The International Barbecue Award 2011 will be awarded in two categories: barbecue equipment and barbecue accessories. A gold, silver and bronze medal is awarded in each category for the products entered. An internationally appointed jury of experts in the barbecue industry will evaluate these products according to various criteria, including product idea, innovation value and design. The closing date for product entries is the 24th September 2010. Prizes will be awarded in October 2010.Further information can be found at: www.bbq-award.comFIRE&FOOD is Europe’s N° 1 grill and barbecue magazine. In only eight years, this magazine has become established as the leading print medium in this constantly growing market segment.The journal reports on news and trends from the world of barbecuing, provides information on accessories and presents a lifestyle shaped by the enjoyment of the good things of life at home and in the garden. FIRE&FOOD also reports on barbecue-related events and provides its readers with valuable suggestions, tips and information.FIRE&FOOD Verlag GmbH Waldseer Straße 3 D-88250 WeingartenContact: Elmar Fetscher - Editor ef@fire-food.com

04-05-2019 | Science & Education
Banasthali
Banasthali Chemical Engineering student Deepali Kataria Sojourn at University of …
It is indeed a matter of great pride that Banasthali has fostered healthy collaboration with several universities abroad to facilitate exchange programs. The student who goes from Banasthali not only goes as an ambassador of her Alma mater but also of motherland India carrying the pride, values and ethos. For the purpose of fostering Student Exchange, Curriculum Design & Development Support, Faculty Exchange, Programme Exchange, Dual Degree Programme etc, Banasthali has
01-03-2019 | Industry, Real Estate & Constr …
QY Research, Inc.
Aluminium Die Casting Machinery Market Trends, Growth and SWOT Analysis by Key P …
In the recently published report, QY Research has provided a unique insight into the global Aluminium Die Casting Machinery market for the forecasted period of 7-years (2018-2025). The report has covered the significant aspects that are contributing the growth of the global Aluminium Die Casting Machinery market. The primary objective of this report is to highlight the various key market dynamics such as drivers, trends, and restraints that are impacting
10-31-2018 | Industry, Real Estate & Constr …
Aluminium Die Casting Machinery
Aluminium Die Casting Machinery Market 2018 Future Trends – Buhler, Oskar Frec …
Qyresearchreports include new market research report “Global Aluminium Die Casting Machinery Market Professional Survey Report 2018” to its huge collection of research reports. The global Aluminium Die Casting Machinery market is valued at xx million US$ in 2017 and is expected to reach xx million US$ by the end of 2025, growing at a CAGR of xx.x % between 2018 and 2025. The major manufacturers covered in this report Buhler Oskar Frech Italpresse L. K. Machinery Toshiba
02-20-2013 | Industry, Real Estate & Constr …
acontis technologies GmbH
EC-Master for INtime® 5
Weingarten, Germany (February 19th, 2013) – acontis technologies GmbH of Weingarten, a leading provider of EtherCAT® software, announced today the release of its EC-Master EtherCAT Master Stack for the new release, version 5 of TenAsys® INtime® RTOS family of products. Real-time Ethernet capability based on the EtherCAT technology, acontis technologies’ EC-Master software and TenAsys’ INtime provide together the key components for modern Ethernet-based PC control systems. These technologies enable customers to
10-20-2010 | Industry, Real Estate & Constr …
IXXAT Automation GmbH
New Sales Director at IXXAT
Thomas Waggershauser is the new Sales Director at IXXAT Automation GmbH. In his new position, Thomas Waggershauser (34) is responsible for the sales activities of IXXAT and the development and expansion of the existing international distributors. Mr. Waggershauser has been employed at IXXAT Automation GmbH as a Sales Engineer since 2004, with responsibility for CAN and Automotive Systems. Before this he was a Product Manager for remote maintenance systems und signal generators
02-12-2009 | Industry, Real Estate & Constr …
IXXAT Automation GmbH
Seminars for CAN, CANopen and EtherNet/IP
The seminars offered by IXXAT provide a quick and detailed introduction to current communication technologies. The seminars are aimed primarily at developers and system designers who have to implement their own developments and want to acquire substantial basic knowledge of the technologies. However, they are also suitable for decision-makers who want to learn about the potential of the technologies. The next dates for seminars in Weingarten: - CAN: March 24.-25. 2009 -
Comments about openPR
OpenPR ist the nicest and most clearly laid out PR platform I have seen to this day. The press releases are displayed very nicely and clearly and without any unnecessary frills. The updates are fast and the finished release looks appealing and is clearly legible. Even with 16 years of experience one discovers new things from time to time. Congratulations!
Gabriele Ketterl, Director Marketing & PR, Menads