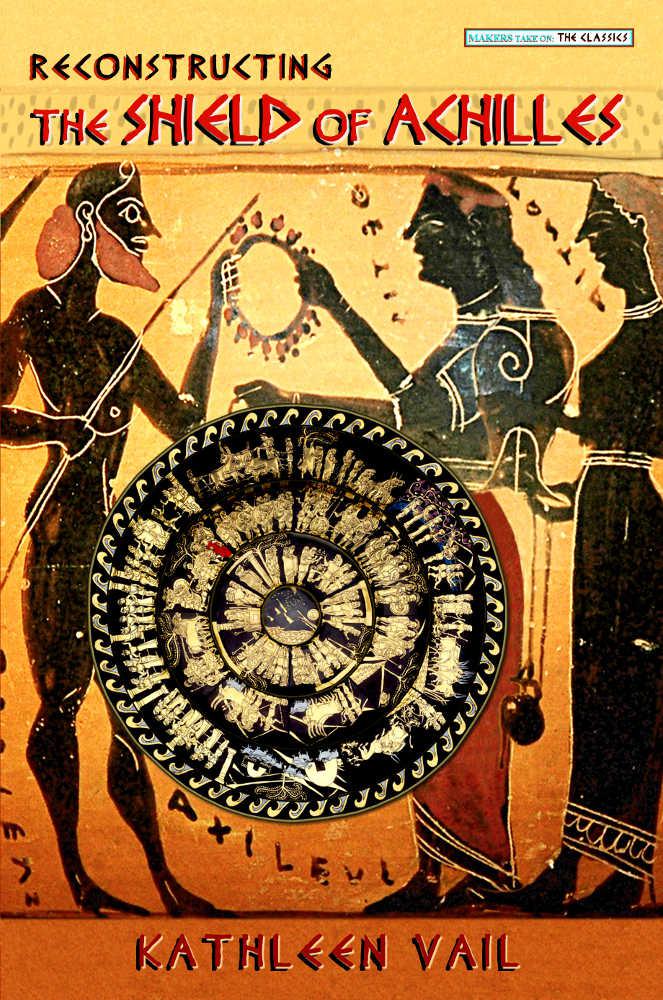 Reconstructing the Shield of Achilles by Kathleen Vail

Kathleen Vail's stunning reconstruction has resulted in a more historically and artistically relevant design than ever before presented!Los Angeles, CaliforniaRECONSTRUCTING THE SHIELD OF ACHILLES By Kathleen Vail is an exciting new release from Story Merchant Books. Now available for sale, review, and author interviews. Resounding powerfully throughout history, Homer’s ancient narrative of Hephaistos forging the invincible weapons of Achilles, with which he heroically brings the Trojan War to a close, remains timelessly fascinating to audiences of all ages.True to Hephaistos' promise, Achilles' immortal shield is “a wonder to behold.” But its actual appearance is a mystery over 2,700 years old, fueling imaginations and debates virtually since the first recital.“Using her Homer the way Schliemann used his,” writes Dr. James A. Arieti in his forward accompanying Vail's new book, Reconstructing the Shield of Achilles, “she has excavated from the text the shape and composition of the shield of Achilles.” Arieti, the Graves H. Thompson Professor of Classics at Hampden-Sydney College, Virginia, adds, “She has changed the words back into gold and silver; she has revivified the text. She has provided for us a glimpse of the world of archaic Greece.”By documenting and adopting an artistic style of roughly contemporary handiwork, Vail's stunning reconstruction has resulted in a more historically and artistically relevant design than ever before presented. Based literally and solely on Homer's specifications in Book 18 of the Iliad, Vail's life-size shield is made of brass sheets inscribed and painted with enamels, exactly matching Homer's Greek.Offering a compelling solution to the ancient mystery, Vail's Shield of Achilles remarkably resembles archaeological artifacts such as bronze swords and daggers inlaid with gold and silver that were found in the royal tombs of Mycenae. Excavated by Heinrich Schliemann beginning in 1874, Mycenae was the ancient Greek realm of Achilles' Commander-in-Chief, High King Agamemnon.Filled with intimate glimpses of ancient Greek life, Reconstructing the Shield of Achilles offers an exciting exploration of Achilles’ spectacular shield. Not only offering a brilliantly illustrated verse translation of Homer’s elaborate description, Vail also follows Achilles’ armed exploits in battle and launches an expedition in search of Achilles’ shield after his epic death on the battlefield of Troy. Now available at Amazon.com in paperback: https://www.amazon.com/Reconstructing-Shield-Achilles-Kathleen-Vail/dp/0999162187 and Web-enhanced eBook: https://www.amazon.com/dp/B07HPDKNRBKATHLEEN VAIL is a member of the Maker Movement taking on the Classics. Combining career skills as a computer engineer and graphic artist for the US Department of Defense with research skills as a lifetime student of Homer’s ancient Greece, Vail’s reconstruction of Achilles’ shield is enjoying great success since its creation. Her shield appears on the cover of Dr. Kenneth Atchity’s "Homer’s Iliad: The Shield of Memory" (Kindle Version, 2014), and Carolina López-Ruiz’ "Gods, Heroes, and Monsters" (2nd Edition, Oxford University Press, 2018). Vail has also presented her work to various groups and organizations, including Virginia chapters of the Classical Association and Mediterranean Society.STORY MERCHANT BOOKS is a facilitator for direct publishing of books (novels and nonfiction), and their representative to entertainment (web, television, and motion pictures). Its goal is to discover exciting books and help them reach maximum audiences in all media. For filmmakers looking for films, Story Merchant Books through its sister company Atchity Productions is happy to provide a copy of the book gratis to potential buyers.Media Contact: Dr. Kenneth J. Atchity Story Merchant Books 323-932-1685 http://www.storymerchant.com atchity@storymerchant.com 400 S. Burnside Ave. #11B Los Angeles, CA 90036 United States