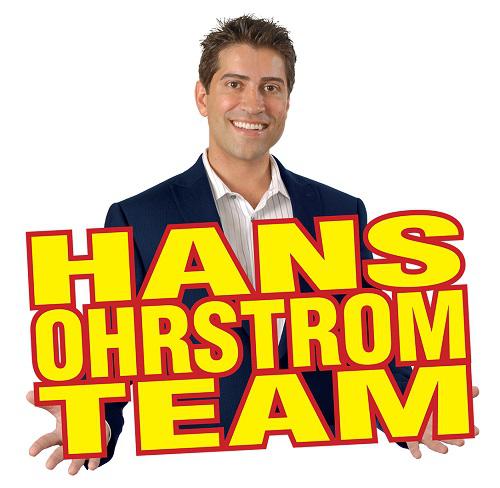 Hans Ohrstrom started his real estate career as a real estate agent in 2004. He had informed his mom that he would do 100 deals in his 1st year. By the end of Hans’s first full year Hans had yet to complete a deal. After working with a family friend for 6 months driving almost everyday after work to show houses Hans Ohrstrom had almost thrown in the towel when he got a call from his client saying they had found their home from an open house and wanted to proceed with an offer. Hans jumped into is 25 year old 4 door beige Audi and drove all the way from North Bay To Brampton. After negotiating the purchase Hans Ohrstrom then Sold his clients home in 16 days.After the deal went firm, Hans Ohrstrom walked into bosses office and quit and went full time real estate. While still living in a basement apartment where he couldn’t even afford the $800/month rent, Hans actually had to win a proline ticket to pay his rent at which point Hans realized he was doing something very wrong and started to study day in and day out reading 100’s sales & real estate books, listening to life changing Anthony Robbins CDs, studying scripts & attending real estate courses from Craig Proctor, David Knox, Danielle Kennedy, Steven Schmeiser, Tom Tauro & More!In 2012 Hans Ohrstrom became Homelife’s Bayview #2 Sales Rep after only the Great Jason Atkins who had held the #1 title for over 7 years.Also In 2012 Hans Ohrstrom became a ‘Broker Of Record’ and opened up Homelife Eagle Realty Inc. from his living room in Newmarket Glenway, but in May 2013 along with guidance from a guardian angel Tom Tauro, Hans Ohrstrom signed a lease and Homelife Eagle relocated to its current office at 13025 Yonge St, Unit 202, Richmond Hill, Ontario (ON) at which point the HANS OHRSTROM REAL ESTATE TEAM was born.By the end of 2014 Hans Ohrstrom became Homelife’s #1 Real Estate Team In The GTA! and for the first time ever Hans Ohrstrom obtained his dream of completing over 100 deals, which could never had been obtain without the hard and committed effort from his amazing team members.In 2015 the Hans Ohrstrom Real Estate Team reached an amazing 220 transactions.Followed by 2017 roller coaster year where the Government halted and crashed the market with the introduction of the 15% Foreign Buyers Tax but is also the year where the Hans Ohrstrom Team became THE #1 Real Estate Team In York Region amassing an incredible 300 transactions.Hans Ohrstrom gives credit to his success to God, his family and the amazing Eagles he has been fortunate to be able to surround himself with through his real estate journey that Hans Ohrstrom says is just beginning ;)“When you surround yourself with Eagles you will become an Eagle.”"HANS OHRSTROM is having over 15 Years of experience in Selling Real Estate as a Professional Real Estate Agent in Canada. The HANS OHRSTROM Real Estate Team Provide Real Estate Services in areas like NEWMARKET, AURORA, BRADFORD, EAST GWILLIMBURY, OAK RIDGES and RICHMOND HILL. HANS OHRSTROM is having top negotiating skills for both Buying & Selling of Real Estate property in Toronto, Ontario. HANS OHRSTROM & his Real Estate agents team follow the most encompassing marketing system in Real Estate with spending over 'Half A Million $$$' only for marketing of Hans Ohrstrom's clients' homes & real estate properties!"Hans Ohrstrom 13025 Yonge St, Richmond Hill, ON L4E 1A5, Canada 905-773-7771 sold@hansohrstrom.com http://www.hansohrstrom.com/

03-11-2019 | Industry, Real Estate & Constr …
Linguaforum GmbH - International Translation Services
Real Estate Transactions
Real Estate Transactions - Translation of the property purchase agreement and interpreting at your notary appointment You are selling your house, apartment or plot of land or acquiring real estate or conducting a commercial real estate transaction as a company? You are a property developer and sell new living space or you participate as an investor in extensive building projects? All this is becoming increasingly interesting and common for foreign business partners
03-11-2019 | Health & Medicine
Soul Pitch Media
REAL GYM. REAL PEOPLE. REAL RESULTS :SOUTHBEACHBOXING
Boxers are in incredible shape. They have toned abs, slender muscles, and great definition. The question is – how do you get that great body without competing in fights? South Beach Boxing knows that “You Don’t Need To Be a Boxer To Train Like One!” Founder and Owner, Jolie Glassman, has taken the same exercises and actual training that REAL PRO boxers use to get lean and toned and made them
08-22-2014 | Industry, Real Estate & Constr …
Walter Stauffenberg GmbH & CO. KG
Real-time system monitoring
Oil condition sensors detect the condition of fluids in real time and allow oil changes when necessary The demand for effective solutions to monitor hydraulic and lubricant systems is constantly increasing. Oil condition – or the result of the natural aging of the substance, decomposition of additives and contamination by foreign particles – is therefore the significant factor in determining the optimal point in time for an oil change. Changing the
02-21-2012 | IT, New Media & Software
Thetaris GmbH
Real-Time Spreadsheet Calculations
Thetaris Theta Proxy XL provides high performance computing in MS Excel Munich, February 20. 2012 - Thetaris presents Theta Proxy XL, an Excel Add-in software that accelerates the performance of complex Excel functions, such as user-defined functions (UDF) for Monte-Carlo simulation. This software is targeted at all Excel users for whom fast calculation of formula results is essential. This includes traders at banks and other financial institutions who have to react
02-21-2011 | Industry, Real Estate & Constr …
Costa Rican Development Corporation
Costa Rica Real Estate
Specialized services and consulting in Costa Rica since 1996. - Here in Costa Rica we provide a large variety of real estate offers, individual consulting as well as broad and complete services according to your needs. - Due to our good relationship to embassies, lawyers, auditors, translators, architects, constructors, travel agencies and so on, we are able to facilitate your immigration and your stay and guarantee ideal support on the ground. My
03-24-2010 | Industry, Real Estate & Constr …
Crosspollinate
Real Estate is a Real Time Business
SAN FRANCISCO, Mar 17, 2010 - Crosspollinate.org soft-launched this month the first version of its real time search and marketing service for Real Estate professionals . Although real-time search engines have proliferated over the last few months, this is the first offering of this kind available for the Real Estate industry. Real time search is a new kind of service which lets individuals and businesses know what is happening around
Comments about openPR
Your portal is fast, simple, and easy to use. Others may have more functions but they also demand more editing time, you have to preformat the text in order to achieve a good result etc. I think openPR is really fantastic!
Andreas Knepper, wallmedien AG