Independence – a factor in Messer’s success 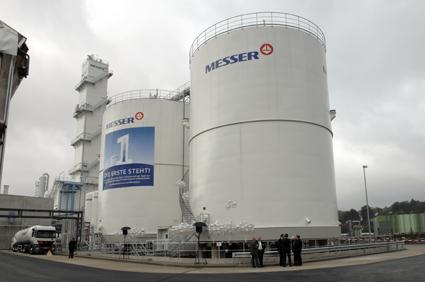 Independent product supply is supported by investments of over 600 million euros in new gas production facilities across Europe.

The industrial gases company was able to improve its sales in the 2009 financial year compared with the previous year. Independent product supply is supported by a long-term investment strategy.Industrial gases specialist Messer achieved global sales of about 797 million euros in the 2009 financial year, thereby exceeding total sales for the record year of 2008 by approximately two million euros. EBITDA for 2009 was 175 million euros. The total number of employees went up from 4696 to 5211, thanks in part to a joint venture with Chinese steel manufacturer Panzhihua Iron & Steel, part of the Sichuan-based Pangang Group, in which Messer holds a 60 per cent stake. “We have invested over 600 million euros in ten large new gas production facilities across Europe – a necessary step as in many regions Messer was reliant on externally sourced gas supplies. Today, almost all the products we sell are produced by ourselves,” explains Stefan Messer, owner and Chief Executive Officer of the Messer Group.The financial crisis triggered in 2008 had a marked impact on the 2009 financial year of the privately owned and operated Messer Group. In the first six months of the year, some of the leading economies experienced an unprecedented slump in production and trade, which was made even more acute by the devaluation of, in particular, Eastern European currencies in relation to the euro. The situation was different in the so-called emerging economies, with China, among others, posting extremely robust economic growth. From the beginning of the second half of the year, though, the situation stabilised somewhat, resulting in a slow but steady recovery. The significant development of our business in China, accompanied by a range of positive factors, even made it possible for the Messer Group to achieve a 0.3 % increase in sales compared with the previous year in what were extremely difficult economic circumstances. “Messer’s success depends on independence and a long-term strategy. The fact that we are not a listed company means that we have no obligation to demonstrate short-term successes,” says Stefan Messer.Messer successful in Germany once again Messer’s return to the German market continued successfully, boosting the overall development of the West Europe Region with an increase in sales of more than 40 % compared with the previous year. Since October 2009, Messer has once again been producing air gases such as nitrogen, oxygen and argon in Germany at an air separation plant on the premises of Deutsche Edelstahlwerke in Siegen. In the past year, Messer achieved sales of over 9 million euros in Germany and has so far installed 174 of its own tank systems on customers’ premises. The installation of a further 100 tanks for the supply of liquid gases to customers across all sectors of industry is planned for 2010. Messer wants to achieve sales of over 29 million euros in Germany this year. In autumn, Messer will commission another production unit for air gases on the site of Salzgitter Flachstahl AG in Salzgitter.Online annual report conserves resources Just like last year, the Messer Group’s annual report has been produced exclusively as an online version for cost saving and environmental protection reasons. In order to do more justice to the internet medium, the individual sections are prefaced by, among other things, interviews with the company’s senior managers. Further interviews provide yet more information on individual topics, from the employee survey to CO2 strategy. All the interviews have been made available as video clips, mp3 audio files and podcasts. The podcast function also allows the interviews to be used in video or audio format when offline. Selected files can simply be downloaded and played on a laptop or multimedia mobile phone – practically as information “to go“.45 years of economic history on the internet Messer has made available all its annual reports for the past 45 years on its website www.messergroup.com. For each year, historian and author Jörg Leszenski has written an informative outline on the economic environment, providing a unique and independent insight into the company’s history, not just for economic historians. Since 2004, Messer has once again been an owner operated company with Stefan Messer as CEO. From 1965 to 2001, Messer, at that time a subsidiary of Hoechst AG, had operated under the name Messer Griesheim.Annual report 2009 http://jahresbericht.messergroup.com http://annualreport.messergroup.comMesser is one of the leading industrial gas companies, and is active in over 30 countries in Europe and Asia, as well as Peru, with over 60 operating companies. Its international activities are managed from Frankfurt am Main, whilst management of core technical functions – logistics, engineering, production and applications engineering – is undertaken from Krefeld. In 2009, about 5,200 employees generated estimated consolidated turnover of approx. €797 million. From acetylene to xenon, the Messer Group has one of the most diverse product portfolios on the market – it produces industrial gases such as oxygen, nitrogen, argon, carbon dioxide, hydrogen, helium, shielding gases for welding, specialty gases, medical gases and many different gas mixtures. The Messer Group has state-of-the-art research and competence centers in which it develops applied technologies for the use of gases in almost every sector of industry, in food technology and environmental technology, medicine as well as research and science.Messer Group GmbH Vice President Corporate Communications Diana Buss Gahlingspfad 31 47803 KrefeldPhone: +49 (0) 2151 7811-251 Fax: +49 (0) 2151 7811-598 Email: diana.buss@messergroup.com www.messergroup.com

01-28-2019 | Health & Medicine
MAXIMIZE MARKET RESEARCH PVT. LTD.
Synthetic Biology Market – Europe
Synthetic Biology Market Europe is expected to reach USD XX Billion by 2026 from USD XX Billion in 2016 at a CAGR of XX% (Detailed analysis of the market CAGR is provided in the report). Synthetic biology has expanded into various interdisciplinary fields that may be defined as the combination of artificial design and engineering to produce biological systems, chemicals or living organisms. Synthetic biology is also used for improving applications
09-10-2018 | Industry, Real Estate & Constr …
QandQ Market Research
Europe Wooden Doors Market
Europe Wooden Doors Market https://www.qandqmarketresearch.com/reports/wooden-doors-market-78 This report studies the Wooden Doorsmarket status and outlook of Europe and major countries, from angles of players, countries, product types and end industries; this report analyzes the top players in Europe and major countries, and splits the Wooden Doors market by product type and applications/end industries. The global Wooden Doors market is valued at XX million USD in 2018 and is expected to reach XX million
08-08-2018 | Health & Medicine
Data Bridge Market Research
Europe Radiotherapy Market
The Europe Radiotherapy Market research report consists of a primary and secondary research along with an in-depth analysis of the quantitative and qualitative aspects by the expert industry analysts and professionals, leading management bodies, to gain a profound insight of the industry as well as the industry performance. The Europe Radiotherapy Market report presents a lucid picture of the current industry landscape, including the historical and projected market size, based
05-12-2016 | Associations & Organizations
Europe Business Assembly
Europe Business Assembly
The Europe Business Assembly (EBA) is an international corporation for the evolution and implementation of economic and social development. The company was established in April 2000 and its history shows a plethora of promising initiatives, creative growth and professional victories. EBA’s activity demonstrates the capabilities and power of professional partnership. The year 2000 saw the beginning and the foundation of EBA with the signing of the memorandum of cooperation and
10-01-2008 | IT, New Media & Software
TEAM International
Smartsourcing in Eastern Europe
In 2008 the outsourcing business of Eastern Europe was estimated at nearly $2 billion, representing just a tiny fraction of the global IT outsourcing market, estimated at about $386 billion. According to the Gartner Dataquest predictions, in the next four years Eastern Europe is expected to outstrip the rest of the offshore market concentrated mainly in the “classical” locations like India. By 2010 Eastern Europe’s IT outsourcing market share is
03-03-2008 | Energy & Environment
Zensys Inc.
Home Control conquers Europe
European Home Control Summit attracts participation from leading International companies and organizations 29. February 2008 - Copenhagen/Frankfurt - The first European Wireless Home Control Summit on 9 April 2008, taking place parallel to Light + Building, features leading companies such as Merten, Horstmann, Danfoss, and market researcher Parks Associates as well as publicly funded organizations like the Danish Energy Saving Trust (DEST) presenting the newest trends, products and market strategies pertaining
Comments about openPR
Your portal is fast, simple, and easy to use. Others may have more functions but they also demand more editing time, you have to preformat the text in order to achieve a good result etc. I think openPR is really fantastic!
Andreas Knepper, wallmedien AG