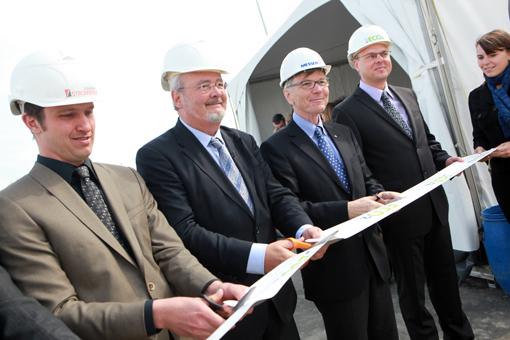 In Belgium, industrial gases specialist Messer recovers 150,000 tons of CO2 a year from industrial waste gas in order to recycle it.Industrial gases specialist Messer has commissioned a new CO2 liquefaction plant with an annual production capacity of 150,000 tons of carbon dioxide on the site of the British company Ineos Oxide in Zwijndrecht near Antwerp, Belgium. The Messer Group has operations in Europe and Asia, and this is its largest CO2 plant. It is operated jointly with the Belgian company IJsfabriek Strombeek under the name “bECO2“, the joint venture set up by the two companies, in which Messer holds a 70 per cent share. In total, bECO2 has invested 17 million euros.With the construction of the new CO2 production plant, the Messer Group is making a positive contribution to the environment. The production facility will recover around 20 tons of CO2 per hour from industrial waste gas and make it reusable. bECO2 captures the CO2 from Ineos’ chemical facilities, where ethylene is reacted with oxygen to form ethylene oxide, a process in which carbon dioxide is generated as a by-product. The CO2 that is discharged is thus turned to economic advantage as a “green gas” without impacting the environment.Messer will use two thirds of the plant’s capacity in order to supply carbonic acid, dry ice or gaseous and liquid carbon dioxide to its customers in the food and beverage sector as well as the manufacturing and water industries, among others. The remaining third will be bought by IJsfabriek Strombeek. In the burgeoning market for carbon dioxide, Messer is already the leading supplier in Belgium and the third largest in Benelux. Sales of carbon dioxide increased significantly between 2004 and 2007.The special properties of carbon dioxide, such as its inertness and its high solubility in water, make CO2 a versatile product with a range of uses, including, for example, in carbonated drinks. In the treatment of drinking water and in wastewater neutralisation, CO2 dissolved in water can replace the use of hydrochloric acid. In cryogenic liquid and solid form (dry ice), carbon dioxide is used as a coolant down to temperatures as low as minus 79 °C.Messer is one of the leading industrial gas companies, and is active in over 30 countries in Europe and Asia, as well as Peru, with over 60 operating companies. Its international activities are managed from Frankfurt am Main, whilst management of core technical functions – logistics, engineering, production and applications engineering – is undertaken from Krefeld. In 2008, about 5,260 employees generated estimated consolidated turnover of approx. €797 million. From acetylene to xenon, the Messer Group has one of the most diverse product portfolios on the market – it produces industrial gases such as oxygen, nitrogen, argon, carbon dioxide, hydrogen, helium, shielding gases for welding, specialty gases, medical gases and many different gas mixtures. The Messer Group has state-of-the-art research and competence centers in which it develops applied technologies for the use of gases in almost every sector of industry, in food technology and environmental technology, medicine as well as research and science.Messer Group GmbH Vice President Corporate Communications Diana Buss Gahlingspfad 31 47803 KrefeldPhone: +49 (0) 2151 7811-251 Fax: +49 (0) 2151 7811-598 Email: diana.buss@messergroup.com www.messergroup.com

07-16-2020 | Science & Education
Gas Sensing Solutions (GSS)
Minimising CO2 Sensor Power Consumption
All GSS sensors use a technique called non‐ dispersive infra‐red (NDIR) sensing where light is injected into the optical measurement chamber, which contains the gas of interest. The light that passes through the optical cavity is detected by the photo diode. The signal from the photo‐diode is digitised by the microcontroller and compared with a reference level stored in memory. The microcontroller can then calculate the level of CO2
02-25-2020 | Science & Education
Biofaction KG
Bacteria as CO2 recycling powerhouse
E. coli can live and feed on formate & methanol: Scientists from the Max Planck Institute (Germany) have reached a significant breakthrough presented in their recent Nature Chemical Biology publication. Their research for EU project eForFuel has redesigned the model biotechnological bacteria Escherichia coli (E. coli) to live and feed on methanol and formate: a possibility that serves as a stepping stone towards future endeavors aiming at recycling CO2 into various
02-20-2020 | Health & Medicine
Data Bridge Market Research
Global Transcritical CO2 Market |
Data Bridge market Research has released a new report on Global Transcritical CO2 Market which incorporates a thorough assessment of overall Global Transcritical CO2 Market The report provides a detailed competitive analysis which includes the profiles of key market players and organizations and their working strategies. The report consists of essential data and information about the concerned Global Refinished Paint Market. For better understanding complex Global Transcritical CO2 Market data
05-01-2019 | Advertising, Media Consulting, …
HTF Market Intelligence Consulting Pvt. Ltd.
Transcritical Co2 Systems Market is Booming Worldwide|
A latest survey on Global Transcritical Co2 Systems Market is conducted covering various organizations of the industry from different geographies to come up with 100+ page report. The study is a perfect mix of qualitative and quantitative information highlighting key market developments, challenges that industry and competition is facing along with gap analysis and new opportunity available and may trend in Transcritical Co2 Systems market. The report bridges the historical
01-17-2019 | Industry, Real Estate & Constr …
E+E Elektronik Ges.m.b.H.
Digital CO2, Humidity and Temperature Sensor
The EE850 duct mount sensor from E+E Elektronik combines the CO2, relative humidity (RH) and temperature (T) measurement in a single device. The sensor can be easily integrated into a bus system via the RS485 interface (Modbus RTU or BACnet MS/TP). The 3-in-1 device is dedicated for building automation as well as for demanding process control. The EE850 features the E+E dual wavelength NDIR CO2 sensing cell, which is particularly insensitive
07-31-2018 | Industry, Real Estate & Constr …
Beer CO2 Regulator Market
Global Beer CO2 Regulator Market | 2018 Key Vendors: Taprite, Titan Controls, Pr …
Qyresearchreports include new market research report “Global Beer CO2 Regulator Market Research Report 2018” to its huge collection of research reports. This report on the global Beer CO2 Regulator market is based upon thorough study conducted by some of the professional and expert analysts of the industry. This report emphasizes on several factors including government regulations that are influencing growth of the market positively or negatively. The report explains challenges, opportunities,
Comments about openPR
OpenPR is clearly structured and remains true to its principle of confining itself to the essential parts. OpenPR has proven to be a very good and reliable partner to our media agency: Within the shortest time the releases are online and go down well with the media representatives. The success of OpenPR is reflected in the steadily increasing number of press releases. It is good that OpenPR exists!
Ursula Koslik, Director Marketing & PR, F+W Hamburg