Press release from: Arthur the guitarist 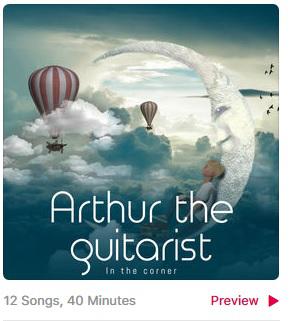 Arthur fell in love with music at an early age, he began playing piano at the age of 11 and drums at the age of 13, he then became a producer at the age of 16, after being inspired by a classical instrumental. In 2009 Arthur purchased his 1st guitar, this moment totally changed his life and allowed him to hear music differently.Initially it took him by surprise how challenging guitar playing was but after a while he became addicted and was able to play any song by ear on guitar, Arthur started off doing covers for other rock songs he had learned and then implemented what he had learned into his instrumentals.He then joined YouTube and Twitter where he was able to increasehis fanbase, he later then released a few instrumentals on itune and Spotify, when ask what his next plan for music was he responds "I've fallen in Love with music and I still have a lot to learn,"Arthur the guitarist's sportify release racked up 1000's of plays in the first week of release which enabled him to build a bigger fan base though he believes the finished product is not ready year.Arthur the guitarist states his only dream is to own a large recording studio with his own studio and plans on working towards that go because he has completed all his study goes and his only mission now is for his music to take off.When asked which bands inspired him to become a music producer and guitarist, Arthur responded:"When I was 14 I used to listen to a lot of orchestra music and also told myself one day I will make instrumentals and I later found a way of doing so and it's one of the gratest feelings in Life."When asked what are your favourite songs he reponded:"Michael jackson- Dirty diana and michael jackson- Place with no name"It is clear to see where he got his guitar inspirationIn less than a year Arthur gained 1000's of music plays online and also video views, to help with with music he insured that he had also completed his university studies. Arthur has several degrees which include:• MSc Information systems management • PGCE Business information systems • BSc hons. business information systems • HND business information technologyThese qualification helped him develop advanced IT knowledge which in turn allowed him to be able to make music fast because he was able to manipulate IT hardware and software with ease.41 clemence road dagenham essex

08-03-2018 | Leisure, Entertainment, Miscel …
Louis Capet XXVI Music Publishing
Evolutive Electro New EDM Album
EVE Michelson, also quite well known in Europe under the name of "No Name" was born in Agen, France, & is a French songwriter-composer-interpreter. She is not a DJ, all her sets are a Live. In the Summer of 2018 she has released her new 12 song Album called "Evolutive Electro." While still at college, she began composing at the age of 13, before leaving the school to devote
06-18-2018 | Leisure, Entertainment, Miscel …
Kevin Coem
Kevin Coem releases debut album “Defying Gravity”
Madrid. Spanish singer-songwriter Kevin Coem first hinted at the release of his debut full album back in April, and it has been out in stores since June 13. The record is titled “Defying Gravity”, and it’s the climax of a 3-single promotion cycle that started in September 2016, when Kevin made his debut with the single “Tokyo Street Lights”. Debuting as a Japanese-language singer in 2012, Kevin Coem went by a
03-21-2016 | Arts & Culture
MÖZARTHEAD
First MÖZARTHEAD-Album out now!
Many a fan all over the world wouldn't have dared to expect it any more, but with the also very exclusive date of Feb 29th it finally became true: MÖZARTHEAD proudly announced the release of their first album with the speaking title „Unheard“. Having been in progress for years now, and thus exceedingly streching the patience of the chosen addicts, this first strike was worth the waiting. On twelve tracks
09-20-2013 | Arts & Culture
Zelinka
Zelinka release first album „Zelinka“
The album “Zelinka” contains 10 songs by Bernd Fleischer and Torsten Grossmann. The versatile sound of this band from Leipzig/Germany combines rocking, blues-influenced, funky and even jazzy tones. Being descendants of that era those three musicians don’t just serve the retro trend. All told it’s instrumental rock music that features Bernd Fleischer’s strong guitar play. Lovers of elemental electric guitars will be fully satisfied with Zelinka. Zelinka is the name for a
09-09-2013 | Leisure, Entertainment, Miscel …
Moonshiner Collective
Moonshiner Collective Releases Debut Album
Dan Curcio, formerly of Still Time, is redefining band structure with his indie music project Moonshiner Collective. Designed to be a revolving door of creative perspectives, it rotates talented musicians in and out, with Curcio’s signature lyrics and vocals as the backbone. The result? A beautiful, collaborative reminder that sometimes the answer is to just “Let Go.” Moonshiner Collective’s first album “Let Go” is an indie folk rock record infused with
10-20-2011 | IT, New Media & Software
Permeative Technologies
Secure Photos and Videos Album for iPhone
You would have wished to have a restricted access to your private or sensitive photos and videos files on your iPhone, to give utmost importance to your privacy, this “Secure Photo and videos” app locks them, and unlocks only when you provide the correct password, so there is no chance of accessing this secured album without your permission. Bangalore, India- 18 October, 2011- Permeative Technologies, one of the prominent providers of
Comments about openPR
OpenPR ist the nicest and most clearly laid out PR platform I have seen to this day. The press releases are displayed very nicely and clearly and without any unnecessary frills. The updates are fast and the finished release looks appealing and is clearly legible. Even with 16 years of experience one discovers new things from time to time. Congratulations!
Gabriele Ketterl, Director Marketing & PR, Menads