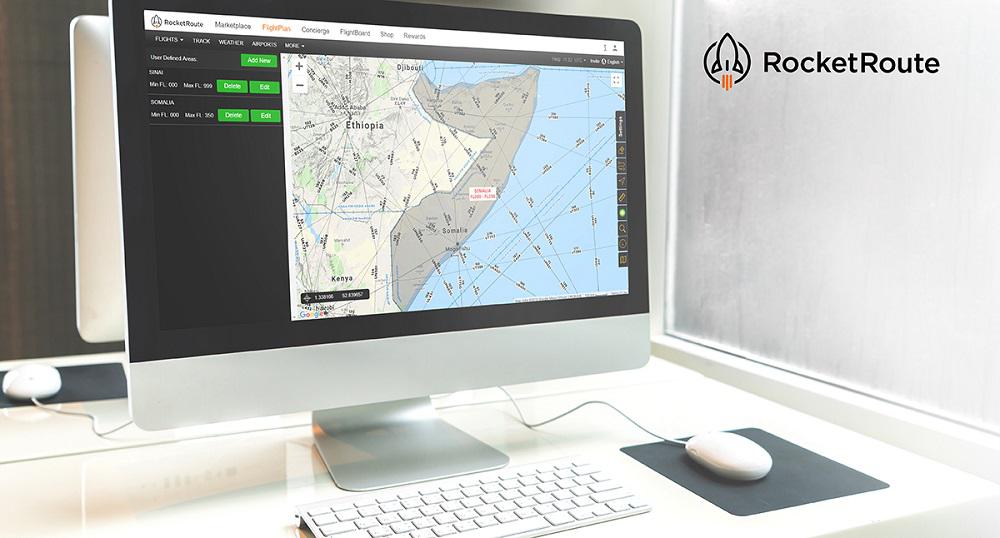 In modern aviation there are many reasons to avoid flying through certain airspace or flying via particular locations. In such cases, finding viable routes to fly can be a time consuming, difficult and often frustrating experience. Thankfully RocketRoute has made life a little easier for those who operate and fly aircraft. Introducing the latest ‘Route Avoid’ and ‘Route Via’ features, find optimal system generated routes that cope with real-world aviation issues such as conflict areas, ATC strikes and more. What was once a difficult and time consuming activity is now accomplished with just a few clicks of a mouse.Users can now easily customize ‘Route Avoid’ regions and mark areas of the world to avoid, for example as defined by an Insurance Agreement. Avoid areas can even be set by default for all new flights, greatly minimising the chance for route errors and flight safety issues.Rob Randall, Head of Operations at RocketRoute commented: “Operators will immediately see benefits in time and effort saved in their Ops room. Above all, this will significantly help our customers create safer and more efficient routes.”In addition, routes can be customized further with the help of the ‘Route Via’ feature. Customers are now able to select preferred waypoints and airways in advance of creating routes, thus also allowing flights to avoid areas such as conflict zones and unnecessary overflight permits. Press Pack: To download press pack materials relevant for this press release, including official images, logos and further information. Press Pack LinkRocketRoute is a leading aviation services company, helping aviators get airborne, anywhere in the world, 24 hours a day. With innovative and smart technology for flight planning, marketplace, and concierge services, RocketRoute is transforming the aviation industry. RocketRoute works anywhere, on any device and brings together into one system everything the flight department or pilot needs to operate an aircraft. The principles of fast, easy to use, direct access has been at the heart of our business, fuelled by its passion for aviation. More information can be found at www.rocketroute.comFor further enquiries please contact marketing@rocketroute.com or UK: +44 1273 782 130 USA: +1 321 473 7423Farnborough Airport, E2 Ively Road Farnborough, Hampshire GU14 6XA United Kingdom

10-18-2018 | IT, New Media & Software
RocketRoute Ltd.
RocketRoute Connects To Honeywell’s GoDirect Datalink
RocketRoute users can now easily upload flight plans to Honeywell’s GoDirect Datalink service. RocketRoute is announcing that it is now compatible with Honeywell’s (NYSE: HON) GoDirect® Datalink service. This new partnership brings a new level of efficiency and accuracy for customers who have the uplink capability. Users are now able to uplink flight plans via GoDirect™ Datalink direct to their aircraft. This capability makes it even easier for pilots
Comments about openPR
OpenPR is clearly structured and remains true to its principle of confining itself to the essential parts. OpenPR has proven to be a very good and reliable partner to our media agency: Within the shortest time the releases are online and go down well with the media representatives. The success of OpenPR is reflected in the steadily increasing number of press releases. It is good that OpenPR exists!
Ursula Koslik, Director Marketing & PR, F+W Hamburg