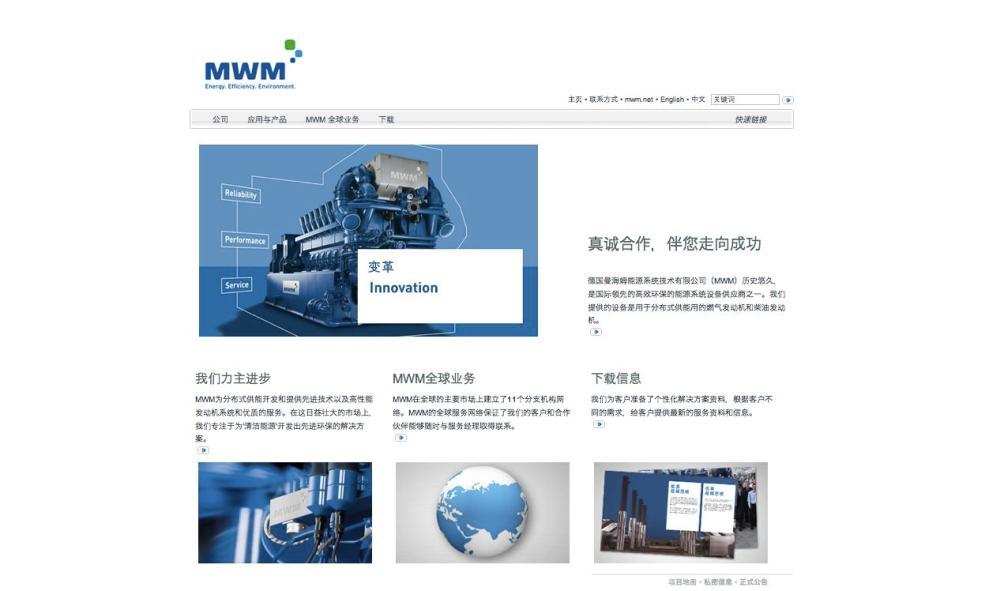 Mannheim, April 26, 2010 In mid-April, a new Web site of MWM GmbH in Chinese went live. However, the new domain with the Internet address mwm.cn is not merely a Chinese translation of the corporate Web site mwm.net. In addition to general information about the Mannheim-based company, the site also features special content elements for the Chinese market. The site contents are also available in English. MWM, a tradition-rich company established by Carl Benz, is one of the world's leading providers of decentralized energy generation plants. Since 2007, a subsidiary based in the Chinese capital has been responsible for marketing the engines produced in Mannheim, Germany, in China. Until recently, this subsidiary operated under the former company name Deutz Power Systems; now, this subsidiary too has been renamed MWM (Beijing) Co., Ltd. This location advantage enables the company to ensure competent and quick service along with extensive, quick supply of spare parts in China. By publishing the Chinese MWM Internet site, the company has underlined its commitment and expansion strategy in Asia. The long-established company MWM in Mannheim, Germany, is one of the world's leading system providers of highly efficient and eco-friendly complete plants for decentralized power supply with gas and diesel engines. For more than 135 years, the company has stood for the reliable, uninterrupted provision of electricity, heat, and cooling at all times and at any location. MWM has 1,170 employees around the globe. MWM GmbH Carl-Benz-Strasse 1 – D-68167 Mannheim Frank Fuhrmann, Head of Communication & PR frank.fuhrmann@mwm.net

10-08-2013 | Energy & Environment
MWM GmbH
Name change: MWM GmbH to become Caterpillar Energy Solutions GmbH
Mannheim, October 08, 2013 | On November 1st, MWM GmbH will change its name to Caterpillar Energy Solutions GmbH. The name change solely affects the legal entity, the established MWM brand is being continued. This step underscores MWM's belonging to the global company Caterpillar. Caterpillar is the world's leading manufacturer of construction and mining equipment, diesel and natural gas engines, industrial gas turbines and diesel-electric locomotives. Two years ago, MWM, the
01-24-2013 | Energy & Environment
MWM GmbH
MWM Asia Pacific receives the 2012 Singapore HEALTH Award in Bronze
Mannheim, Jan. 10, 2013 / At the end of November 2012 MWM Asia Pacific Pte. Ltd. received the Singapore HEALTH 2012 bronze health award. The MWM subsidiary received this important award, which is granted in platinum, gold, silver and bronze, for its exemplary dedication to promoting workplace health. The Singapore HEALTH Award is presented every two years by the Singapore government’s Health Promotion Board to give recognition to companies,
06-11-2012 | Energy & Environment
MWM GmbH
Cogeneration at Düsseldorf International Airport: Reliable energy for the futur …
Germany’s energy policy shift away from nuclear energy in mid 2011 means that the share of renewable resources it uses to generate electric power will increase to 35% by 2020. This can be accomplished through a combination of measures including the increased use of cogeneration. The reason: Natural gas-fired plants that produce both heat and electricity and that are used in combination with heat storage equipment may be just the
03-03-2012 | Energy & Environment
MWM GmbH
The MWM model series – innovation and constant development
Mannheim, March 1, 2012 | After two years of constant development, the new version of the TCG 2032 (the largest MWM genset) was launched in January 2012. Optimized spark plugs and turbocharger technology have resulted in electrical efficiency of up to 44.2% with an output of 3,333 to 4,3000 kWe (in the V12 and V16 cylinder versions). Thanks to excellent operational experience, the period of operation up to the major