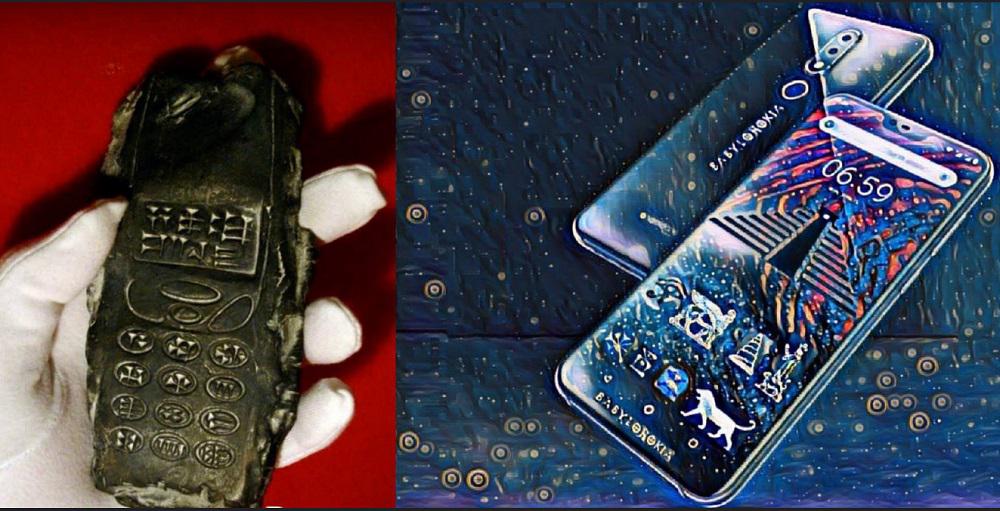 Babylonokia Celebrates 20th Anniversary! 1998 - 2018 10 October 2018, AUSTRIA, EU - Babylonokia is proud to announce its twentieth year as leading art gallery in the field of antique cell phones. In an era when cell phone companies are growing enormously, Babylonokia has achieved worldwide renown in two decades. Babylonokia is a clay copy of a mobile phone from the 1998s, its keys and screen showing cuneiform script. It’s the world’s first cuneiform cell phone. The founder, Karl Weingaertner created the work to represent the evolution of information transfer from the ancient world to the present. Fringe scientists and alternative archaeology proponents subsequently misrepresented a photograph of the artwork as showing an 800-year-old archaeological find; that story was popularised in a video on the YouTube channel Paranormal Crucible and led to the object being reported by some press sources as a mystery. Weingaertner created the phone-styled clay tablet with cuneiform signs as a reaction to an exhibition at the Museum for Communication in Berlin titled From the Cuneiform to the SMS: Communication Once and Today, as well as the negative, global effects of information technology. Cuneiform signals the beginning of written records of information. The fact that it is a clay copy of what appears to be a Sony Ericsson S868 mobile phone, a model from the 1990s, had no meaning for the artist, who was using it as a metaphor for mobile devices in general. While communications technology continues to increase exponentially, but on the other hand, more and more people are becoming addicted to mobile phones. Babylonokia sees no better method than “Phone-Art” to reflect these exciting but very disturbing phenomena.Art Gallery 4894 Oberhofen Austria Europeen Union4894 Oberhofen Austria Oberhofen 52

03-15-2018 | IT, New Media & Software
Rolustech
Rolustech Celebrates 10th Anniversary!
SAN FRANCISCO, USA – Rolustech reaches an exciting milestone as it turns ten this year. Founded in 2008, Rolustech is a Professional IT Services firm which specializes in CRM, mobile, web and product development. Starting off with two founding members, Hussain Nasir and Shahrukh Riaz, Rolustech has evolved into a team of more than 100 members including seasoned project managers, certified developers, quality assurance engineers, software engineers, technical architects, business analysts
03-09-2011 | Fashion, Lifestyle, Trends
GOLFINO AG
GOLFINO celebrates 25th anniversary
Glinde, 8 March 2011 – “25 Years of Elegance in Sport” – with this motto, GOLFINO AG is celebrating its anniversary in 2011. For a quarter of a century, GOLFINO has been providing its sophisticated customers with exclusive sportswear, which combines high-tech functionality with an elegant, sporting style. The company was founded in 1986 and has continuously grown to become the European market leader for golfwear. In March, the 25th
02-09-2011 | Business, Economy, Finances, B …
Evalueserve
Evalueserve celebrates 10 years
Evalueserve, the Knowledge Process Outsourcing (KPO) pioneer, is celebrating its 10th year in business. Founded in December 2000 by Marc Vollenweider and Dr. Alok Aggarwal, Evalueserve has established a new global market segment for knowledge-based analytics processes. ‘Over the past decade, we have been continuously strengthening our position as the number one global pure-play KPO provider. As a specialist for knowledge-based processes in various industry verticals, we focus on providing a strong
12-02-2010 | Business, Economy, Finances, B …
HPG
HPG Celebrates Client's Success
RALEIGH, N.C. (December 1, 2010) — Hughes Pittman & Gupton, LLP (www.hpg.com), the largest CPA firm headquartered and staffed in the Research Triangle Park region of North Carolina, congratulates client Kingsdown Inc. on partnering with the “LIVE! with Regis and Kelly” show. Kingsdown’s premium mattress division, Sleep to Live, provided the mattresses used to break a Guinness World Record. The mattresses were then donated to charity. “Kingsdown has been a
10-28-2010 | Business, Economy, Finances, B …
ProjectWell Management Pvt Ltd
ProjectWell Celebrates its Anniversary.
Mumbai: Projectwell Management Pvt Ltd celebrated its anniversary on October 25, 2010 with members taking a mid-work break to have cake and cookies. Speaking on the occasion, Parthajeet Sarma, Director, Projectwell Management Pvt Ltd, thanked all Projectwell members for the cohesive working style demonstrated over the last one year, which helped the company to propagate the concept of Development Management in India and secure new assignments. Started in the middest of the
10-04-2007 | IT, New Media & Software
ProSyst Software GmbH
ProSyst Celebrates 10th Anniversary
Cologne, October 1, 2007 — Ten years ago this month, ProSyst Software GmbH (prosyst.com) was founded on the idea that object-oriented programming and Java technology could be combined and commercialized as software components to help corporate customers to create the next generation of smart software applications and services. Since its founding in 1997, ProSyst has expanded from a handful of people in a small office in Cologne to a multinational
Comments about openPR
I can't but agree to the positive statements about your portal: easy to use, clear layout, very good search function, and quick editing!
Jens O'Brien, Borgmeier Media Communication