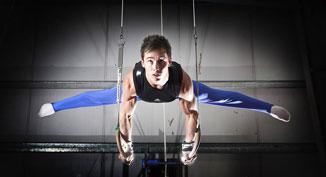 The winner of the training session with an Olympic hopeful from Corby has been announced, by his sponsors, Opus Energy. Zoe Parker, aged 8, won the training session with Gymnastics World Championship silver medallist, Daniel Keatings, plus four tickets to the European Gymnastic Championships, after entering the competition run by business energy supplier, Opus Energy. Competition winner, Zoe Parker commented: “I am so excited about my training session with Daniel and I get to see him compete at the European Championships too. He is a very good gymnast and I hope I can learn some new techniques from him to help with my gymnastics.” The competition was launched by Opus Energy, to offer young gymnasts the opportunity meet a local gymnastics’ hero and to experience the world of European gymnastics first hand. Zoe’s Senior coach, Marie Mitchell from Kettering Olympic Gymnastics Club, said:“We are delighted that Opus Energy has created this fantastic opportunity that will inspire young gymnasts to excel in the sport. The club is thrilled at having an Olympic standard gymnast, such as Daniel run a training session with Zoe.”Daniel is showing huge potential for the 2012 Olympics having already won Britain’s first ever medal at the men’s All Around event at the 2009 World Championships. Despite suffering from two dislocated fingers after falling in a training routine, Daniel has been confirmed to represent Great Britain at the European Championships and is confident about team GB’s performance; “The preparations for the Europeans have been tough. The whole team has been working really hard and hopefully we will get a place on the podium for the first time as a team at a major championship,” says Daniel. He adds, “I am looking forward to meeting Zoe. It’s good to know I can help young gymnasts, through opportunities such as these, to achieve their aspirations to become a professional athlete.” Opus Energy is committed to working within the Northampton community and supports many local initiatives, including, a pledge to raise £10,000 for the Friends of Cynthia Spencer Hospice.About Opus Energy Opus Energy is a leading independent supplier of electricity to UK businesses. With offices in Northampton and Oxford, Opus Energy employs over 230 people. Opus Energy supplies over 60,000 UK business sites across all sectors. Large customers include: Stagecoach, Thorntons, Farmfoods, FirstGroup, and John Lewis. Opus Energy’s management team has a 50 per cent stake in the business, while International Power Plc (LSE:IPR.L) holds 30 per cent and Telecom Plus Plc (LSE: TEP.L ) has 20 per cent. For further information about Opus Energy, please see www.opusenergy.comFor press enquiries, please contact Nicole Sharp / Leo Wood FD T. 0207 269 7258 / 7137 E. nicole.sharp@fd.com / leo.wood@fd.com Opus Energy Opus House 285 Banbury Road Oxford OX2 7JF

09-20-2013 | Energy & Environment
Opus Energy
Opus Energy weighs in with sponsorship of Chantelle Cameron, next rising star of …
B2B energy supplier Opus Energy has announced its sponsorship support for Northampton-born female boxer Chantelle Cameron. Chantelle will join Daniel Keatings, gymnastics World silver medallist and European champion, in a line-up of sporting talent being supported by Opus Energy as it looks to develop potential of all types in the local community. Chantelle is currently on the Great Britain women’s boxing programme training full time in the lightweight (60kg) weight class.
04-10-2013 | Energy & Environment
Opus Energy
Opus Energy announces apprenticeship intake in partnership with Northampton Coll …
Northampton-based Opus Energy has announced it will be awarding ten new NVQ Apprenticeship positions to local people in 2013, five of whom will start working at the company during National Apprenticeship Week on 11th March. The announcement follows the successful launch of Opus Energy’s apprenticeship scheme last year, when 11 apprenticeship roles were awarded. In order to fill the ten new positions, Opus Energy is working closely with Northampton
02-27-2013 | Leisure, Entertainment, Miscel …
Opus Energy
Opus Energy organises charity band night in Northampton
A headline act from the Northampton music festival, Whiteroom, has announced that it will be joining other bands from Northamptonshire at a charity gig night - Opus Rocks - organised by Northampton-based Opus Energy, on Friday 8th March at the Picturedrome, Northampton. The Cystic Fibrosis Trust has been Opus Energy’s chosen charity since 2010, during which time over £40,000 has been raised for the cause. The money is used to help
02-26-2013 | Energy & Environment
Opus Energy
Opus Energy is sponsoring the Energy Live Consultancy Awards
Business-to-business energy supplier, Opus Energy, is proud to announce its sponsorship of the Industrial & Commercial (I&C) Most Innovative Consultancy category at this year’s Energy Live Consultancy Awards. The awards, launched this year, aim to recognise the work done by consultants and set a standard for best practice. The entry criteria are challenging and entrants will be judged by an independent panel of experts. Winners will be announced at a ceremony

11-29-2018 | Business, Economy, Finances, B …
EightCap
Daniel Ricciardo becomes EightCap Official Ambassador
Australian F1® driver Daniel Ricciardo has joined forces with Forex & CFD Broker EightCap. Daniel has joined one of Australia’s fastest growing online trading companies as the official brand ambassador. “Getting to know the team at EightCap and their business made the decision a really comfortable one for me. EightCap is ambitious and just as passionate about the financial markets as I am about my career.” “Striving to be the
03-15-2018 | Politics, Law & Society
Huff Powell + Bailey, LLC
DANIEL J. HUFF ADMITTED TO THE DANIEL J. HUFF ADMITTED TO THE
Atlanta, GA — Daniel J. Huff has become a Fellow of the American College of Lawyers, one of the premier legal associations in North America. The induction ceremony at which Dan became a Fellow took place recently before an audience of 700 persons during the recent Induction Ceremony at the 2018 Spring Meeting of the College in Phoenix, Arizona. The meeting had a total attendance of 850. Founded in 1950, the College
03-31-2016 | Arts & Culture
San Francisco Maritime National Park Association
Daniel Bacon's Debut of Historical Novel, Frisco
SUNDAY- APRIL 3rd: The San Francisco Maritime Park Association is proud to present Daniel Bacon’s historical novel “Frisco” – a critically acclaimed production chronicling the San Francisco waterfront during the 1930’s. A portrait of San Francisco during the Great Depression, Frisco tells the story of Nick Benson and Clarisa McMahon, whose relationship is torn apart when financial hardships force them to take separate paths. During a longshoremen strike, they
09-11-2012 | Politics, Law & Society
Jackson Walker L.L.P.
Jackson Walker Welcomes Daniel Nossa
Daniel Nossa joins the Energy practice and the Derivatives group in the Houston office at Jackson Walker. Mr. Nossa represents issuers, underwriters, and derivative counterparties on an array of derivative and structured finance products. He provides regulatory advice to derivative dealers and end users in the energy industry. Mr. Nossa advises numerous private and public companies in negotiating the transaction and credit support documentation related to credit, commodity, equity, and
11-24-2010 | Health & Medicine
Team Daniel Foundation
Team Daniel Foundation Debuts Revamped Magazine
Fayetteville, NC (November 23, 2010)—Team Daniel Foundation, an organization dedicated to supporting North Carolinians with developmental disabilities, has rejuvenated its quarterly magazine, EMPOWERED.The only publication in the state written specifically for the developmental disabilities community, EMPOWERED tailors its content to inform, educate and be a resource for families and individuals with developmental disabilities. The new EMPOWERED magazine is designed with a more functional and appealing layout, including new sections and powerful
10-08-2007 | Politics, Law & Society
i1connect
Daniel Imperato on Normalizing Relations with Cuba
Washington DC (i1Connect News) – Daniel Imperato revisited a campaign promise today, to open communications and improve relations with Cuba. As the leading Independent candidate for President, Imperato – who has extensive world business and strategic experience – repeated his 2005 prediction that if the United States didn't take action with Cuba, someone else will. Back in June of 2007, Imperato called for an immediate meeting with Fidel Castro, once
Comments about openPR
We publish our press releases on openPR.de because we like people who are "open" - just like us.
Frank Obels, CEO, INCONET - Informationssysteme, Communication und Netzwerkberatung GmbH