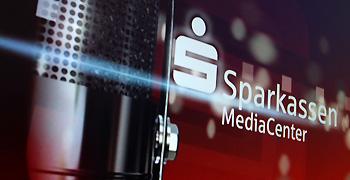 For years the Sparkasse organization has worked in close collaboration with the agency Golden Alligator Interactivities to set the tone for using multimedia content in the finance sector. March 26, 2010, Berlin: The Sparkasse relies on multimedia content to communicate complex information. In mid-April 2010 five Sparkasse Internet Branches will launch the pilot phase of the Media Center project. At the center of this project is moving picture content of every variety. "With the Media Center we are consistently building up the online functionality of the Sparkasse," says Alexander Doukas, head of the Sparkasse Finance-Portal. One in four Sparkasse customers is already active with online banking, and this number is growing. The customers whose lives are moving online still expect expert advice when it comes to complex financial decisions. "Our core competencies of 'Customer Contact' and 'Quality Advice' are carried over, through the Media Center, into the online world", continues Doukas. The Media Center uses the latest in internet technology: Topics that are the most often searched appear in a so-called 'Tag Cloud', a visual representation of the frequency of keywords. Words appear in a larger font size the more often they are searched which allows easy navigation of popular themes. Videos in the Media Center can be chosen from a list or be presented using Image-Flow. Similar to iTunes, Image Flow allows the user to quickly scan through the available titles using simple mouse movements. The Media Center is, of course, deeply and intelligently connected to all that the Internet presence of the Sparkasse has to offer. The newest centralized mutimedia outlet was developed by Golden Alligator Interactivities. The rich-media experts, based in Berlin and LA, long ago perceived the trend toward ubiquitous video content online and started helping clients to use the power of moving images to tell their story. André Nitze, CEO of Golden Alligator Interactivites explains his vision of the media world of tomorrow: "Take, for example, a travel segment on television. It will be, as usual, professionally conceived, edited and produced but the imagery comes from a social media site like Flickr or You Tube." The couch potato of today becomes, according to Nitze, an active producer of content. "In the near future television will fit itself even more closely into the mold of the internet, blurring the line between producer and consumer," Nitze continues.The Sparkasse organization, the largest financial services provider in Germany, will start the pilot phase of the Media Center project with five Internet Branches. The nationwide rollout is expected in the summer of 2010.Golden Alligator Interactivities create successful communications solutions from idea to implementation. Whether online media, video production, user-interfaces, 2D/3D animation, web style-guides or campaign performance tracking for audiences large and small, Golden Alligator sets the standard for elegant and effective design.Golden Alligator Interactivities GmbH (US) Tom Lynn 2404 Wilshire Blvd. #11F LA, CA  90057 Phone: +1 (301) 331-2611 E-Mail: tooth@golden-alligator.com Internet: www.golden-alligator.comLearn more about our strengths in digital media. View our past projects and let our clients speak for themselves! Subscribe to our newsletter: http://bit.ly/5k0LtH

You can edit or delete your press release The new Media Center project from the German Sparkasse organization brings motion to online banking.  here

01-29-2010 | Media & Telecommunications
Golden Alligator Interactivities
Hi-Def TV Ad for AMD
Berlin, Germany, 2010-Jan-28 - The rich media agency Golden Alligator Interactivities developed and produced a television ad in HD for microchip manufacturer AMD. The 3D trailer advertises the newest AMD processors and envelops the viewer in a virtual world of sand and silicon. The spot is being aired worldwide on the Al-Jazeera network in both Arabic and English versions. Behind the letters AMD is Advanced Micro Devices, Inc. the US-based company

11-27-2013 | Media & Telecommunications
Telespazio VEGA Deutschland GmbH
Space Technology for Sparkasse Dillenburg
Darmstadt, 27 November 2013 ​ Customers of the Sparkasse Dillenburg (Region of Hesse, Germany) can look forward to a new mobile branch office, which will be operational end of this year. The space company Telespazio VEGA Deutschland, a subsidiary of Telespazio (a Finmeccanica/Thales company) will provide the satellite connection between the mobile bank and the main office. The catchment area of the Sparkasse Dillenburg covers many small villages and communities which do
07-03-2012 | Arts & Culture
EMMANUEL POST
Sebastian Gögel - Boulevard
Opening reception: Friday, July 6, 2012, 7 pm Duration of the exhibition: July 7 - September 1, 2012 Tuesday - Saturday, 12 - 7 pm ++++++++++++++++++++++++++++++++ Summer break: July 28 - August 17, 2012 ++++++++++++++++++++++++++++++++ We are pleased to announce the fifth solo exhibition 'Boulevard' by the Leipzig artist Sebastian Gögel of his most recent mid- and large-format paintings. Corresponding to the real boulevard as a place of social interconnections and entanglement, Gögel's 'Boulevard' accommodates a cosmos of social
04-30-2012 | Business, Economy, Finances, B …
DERMA EVE® - Institute for Improved Skin Texture -
DERMA EVE® elected to become MasterCard X-TENSION & Gold Partner of the Sparkas …
Moenchberg / GERMANY, April 2012 + + + Sparkasse Bank of Miltenberg-Obernburg and DERMA EVE® agreed to cooperate + + + Sparkasse´s added value concept now expands with DERMA EVE® as a regional cooperation partner + + + DERMA EVE´s® products and services are integrated part of MasterCard X-TENSION & Gold + + + true benefit to all MasterCard customers + + + Today, the Sparkassen Bank of Miltenberg-Obernburg and DERMA EVE®
09-10-2009 | IT, New Media & Software
WeWebU Software AG
Support of Growth Strategy: WeWebU is a Stock Corporation
Herzogenaurach, 09/09/2009 – WeWebU, provider of Enterprise Information Management (EIM) standard software, announces the change of its corporate form to a stock corporation (Aktiengesellschaft, AG). Since September 2, 2009, it has been registered as WeWebU Software AG in the trade register. With this significant step, WeWebU supports its growth strategy and adapts its business organization to the growing market for EIM standard software. During the past few years, WeWebU has
09-26-2008 | IT, New Media & Software
WeWebU IT-Solutions GmbH
Jörg Limberg augments WeWebU’s Advisory Board
Herzogenaurach, September 26, 2008. – WeWebU’s advisory board got a new member: Jörg Limberg supports WeWebU’s executives in important matters of enterprise growth, sales and positioning with immediate effect. „Since many years and with great pleasure I have been noticing that innovations in the software industry are often developed by small agile enterprises. The fascinating thing about WeWebU is that it identified several essential requirements of the ECM market and provides
04-01-2008 | IT, New Media & Software
SOFTPRO GmbH
RSA Conference 2008: Softpro presents Next Generation Signature Tablet
Signature Verification and Fraud Detection Detection Solution Specialist Softpro presents its Next Generation Signature Tablet at the RSA Conference in San Francisco. The company is exhibiting together with 13 other specialist in IT security in the German pavilion under the umbrella of \"IT security made in Germany\". The Signature experts will showcase their innovation in booth 1332 along with their newly released and highly innovative end-to-end electronic account opening application.
Comments about openPR
I can't but agree to the positive statements about your portal: easy to use, clear layout, very good search function, and quick editing!
Jens O'Brien, Borgmeier Media Communication