MAYHEM PARK ~ Now being referred to by critics as being one of the 10 most sought out CULT films to watch in 2018! 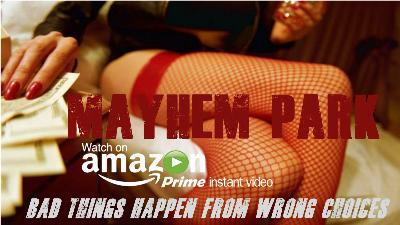 MAYHEM PARK ~ Now being referred to by critics as being one of the 10 most sought out CULT films to watch in 2018!

"MAYHEM PARK" ~ Now being referred to by critics and reviewers as one of the 10 most intriguing, MUST SEE, CULT films to watch. Due to its mysterious and eerie nature, they claim people are watching this film to become mesmerized.Quite a claim, for a micro-budgeted “indie” film! However, it begs the question, as to how and why does a simple horror-suspense-thriller movie attract an audience who allows themselves to be mind-altered?Furthermore, psychologists are beginning to pop up out of the woodwork studying this phenomenon as to why this film is so becoming in a mind-altering fashion. Thus far their best educated guess is the manner in which the actors present, and deliver their lines. For instance, their facial expressions and line deliverance, combined with, what most will agree, is the MUSIC makes for a massive subliminal and eeriness that surrounds the total environment and makes the experience a DARK, earthly, confronting, and moreover, a psychological mind bending phenomenon which could safely be compared to the experience you would similarly get from self-induced barbiturates. More commonly described in the medical profession as a psychoactive drug, psychopharmaceutical, or psychotropic is a chemical substance that changes brain function and results in alterations in perception, mood, consciousness or behavior. All-in-all quite a claim!Our estimation is you will just have to watch it yourself and we mean BY YOURSELF with NO INTERRUPTIONS throughout the entirety of the two hour and twenty two minutes, in order to get the full effect. What is the movie industry coming to?MAYHEM PARK ~ CRITICS CHOICE! ~ Rumored to be the Murder / Mystery film of 2018!Trailer: https://www.youtube.com/watch?v=9A66zLQe8Mc On AMAZON PRIME: https://www.amazon.com/dp/B07G5PHX51On Vimeo: https://vimeo.com/ondemand/garroterLaguna Films Email: LagunaFilms@aol.comAbout the director - Joey Harlow ~ As history will have it similar to the Alfred Hitchcock story. In June of 1939 Life magazine called him the "greatest master of melodrama in screen history. There can be no question Joey Harlow, the director of MAYHEM PARK has yet to gain his due, for a screenplay so Hitchcock in nature and substance in terms of melodramatic cinema. In April of this year his latest film MAYHEM PARK was released on Amazon Prime. It went viral in a matter of only a few short days. Had today's virtual theater been a physical theaters, it was equivalent to movie goers wrapped around the building to see his latest work. In May of this year technical issues discovered by Amazon caused the film to be taken down. All viral activity ceased to exist. In early August the film was rejuvenated and AGAIN the film went VIRAL continuing its popularity among movie watchers who could appreciated the Hitchcock of the 21st century. Currently another 3rd set back took place on August 17th when Amazon once again took the film down for an error in the film's rating. At this juncture there is no question that when this film is up and view-able again, THIS TIME it will remain up and undoubtedly regain the public's popularity status it deserves. This is a race horse with the fingerprint of a Secretariat that has been shut down at the gate and is itching to run its race. In conclusion, should this film regain its popularity a THIRD TIME, then there can be no question, that it truly is the modern day Hitchcock melodrama cinematic experience of modern day.29355 Little Mack Ave Roseville, MI 48066

You can edit or delete your press release MAYHEM PARK ~ Now being referred to by critics as being one of the 10 most sought out CULT films to watch in 2018! here