Modernisation of the power sector in Poland – tough challenges for investors 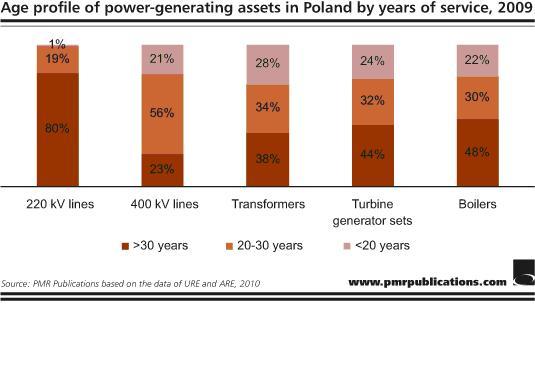 Age profile of power generating assets in Poland by years of service, 2009

Due to long-standing underinvestment, the Polish power sector is facing a genuine need of finding up to €50bn on investments in new power-production capacity and transmission systems in the coming years. However, only part of the projects initially announced by investors will be actually implemented. Thus, the amount of around €25bn earmarked for capital investments in the power sector in 2010-2020 seems to be a more realistic figure.As stated in research and consulting company PMR’s report entitled “Power Sector Construction in Poland 2010 – Development forecasts and planned investments”, the most substantial growth in new power generation capacity is expected in 2014-2016 when power generating units of 8,000-10,000 MW will be commissioned. What’s interesting, in addition to the plans of Poland’s four largest power groups, including PGE, Tauron, Energa and Enea, major investments are also planned by foreign investors present in the Polish market (Vattenfall, RWE, GDF SUEZ, CEZ, EDF and Fortum); moreover, investments in the power sector are also planned by many companies which have not been directly involved in the power sector to date, including PGNiG, PKN Orlen, Lotos, KGHM and Kulczyk Holding. Also, large projects are planned in the renewable energy sources sector. As far as investments within the renewable energy sources sector are concerned, the wind power segment has by far the best prospects. In the next decade, Poland will be among the fastest growing markets in terms of new wind power projects with the average annual growth in installed capacity in the range of 800-900 MW. The wind power market offers highly promising prospects, as it was only recently that it has started to grow. However, this branch of the power sector can face numerous barriers, including the lack of a unified and common strategy of the government and inconsistency in the approach to wind power of individual ministries, long time taken to complete wind power projects (four to seven years), long time waiting for delivery of wind turbines (even up to two years), no coordination of network extension planning between individual distributors and the policy of “booking” connection capacity, which creates an informal market for trading in connection rights. PMR analysts estimate that the biggest market players will plan to obtain up to half of the funds necessary for project financing from external sources. Due to the required volume of capital expenditure related to power sector projects, there are several potential external sources of project financing. The major of them include loans and borrowings from domestic lenders, bonds, issues of shares on the Warsaw Stock Exchange, financial commitment of a strategic investor and loans from the European Investment Bank and the European Bank for Reconstruction and Development (in the case of the EIB and the EBRD funding, Poland is the largest borrower in Central and Eastern Europe). However, raising funds for all the projects planned in the power sector will be by no means a simple task. Consequently, part of the projects will be financed with the funds coming from energy price increases. When analysing the planned projects, it should be borne in mind that the power sector is operating in a highly volatile economic and legal environment where political decisions have an increasingly strong impact on projects’ profitability. Therefore, implementation of long-term projects in the power sectors must take into account the laws and regulations which will come into force in the future. However, there is little certainty about the future regulations concerning the power sector or environmental issues. Thus, any specific investment decisions in the power sector are exposed to a considerable risk. Hence, some of the power projects initially announced by investors will not actually materialise. They can be potentially substituted by new projects which have not yet been disclosed or are in the early preparation stage. Despite the anticipated difficulties in securing the funding for all the planned projects, well-prepared projects which have a sales market and a convenient location and use an appropriate technology are bound to secure the necessary funding and they will be put into practice.This press release is based on information contained in the latest PMR report entitled “Power Sector Construction in Poland 2010 – Development forecasts and planned investments”.PMR Publications (www.pmrpublications.com) is a division of PMR, a company providing market information, advice and services to international businesses interested in Central and Eastern European countries and other emerging markets. PMR key areas of operation include market research (through PMR Research), consultancy (through PMR Consulting) and business publications (through PMR Publications). Being present on the market since 1995, employing highly skilled staff, offering high international standards in projects and publications and providing one of most frequently visited websites, PMR is one of the largest companies of its type in the region.For more information on the report please contact: Marketing Department: tel. /48/ 12 618 90 00 e-mail: marketing@pmrcorporate.comPMR ul. Supniewskiego 9, 31-527 Krakow, Poland tel. /48/ 12 618 90 00, fax /48/ 12 618 90 08 www.pmrcorporate.com

06-13-2017 | Business, Economy, Finances, B …
ReportsWorldwide
Agrochemicals Market in Poland
ReportsWorldwide has announced the addition of a new report title Poland: Agrochemicals: Market Intelligence (2016-2021) to its growing collection of premium market research reports. The report “Poland: Agrochemicals: Market Intelligence (2016-2021)” provides market intelligence on the different market segments, based on type, active ingredient, formulation, crop, and pest. Market size and forecast (2016-2021) has been provided in terms of both, value (000 USD) and volume (000 KG) in the report. A
09-21-2011 | Business, Economy, Finances, B …
Poland Consulting Services
A+ ratings on Poland
Jelenia Gora/Poland, 20.09.2011 - In August 2011 two rating agencies i.e. Standard & Poor's and Moody's Investors Service affirmed their A+ rating on Poland with a stable outlook. Both agencies noted that the Polish economy is competitive and increasingly diversified. Moody's evaluated Poland as relatively well placed to withstand global turmoil with its relatively resilient economy. Both agencies stressed that the Polish economy continued to expand in 2009, in contrast
08-17-2010 | IT, New Media & Software
PMR Publications
IT market in Poland
IT providers in Poland are starting the post-crisis period in actually quite good moods and are already beginning to predict what solutions will be most sought after by their customers during prosperity. However last year hardware distributors recorded significant reduction in the number of orders placed, especially by business customers, software and IT services providers performed far better. A majority of them had similar sales as in previous periods, while some
07-07-2009 | Media & Telecommunications
PMR Publications
VoIP in Poland
At the end of 2008 the Polish VoIP telephony market was worth PLN 440m, with CaTV operators having generated the largest share of revenue in the segment. In recent years also fixed-line operators have included VoIP services into their offer. According to research and consulting company PMR Polish VoIP market continues to represent a small share of the fixed-line telecommunications market. In 2008 it accounted for approximately five percent of the
04-30-2009 | Industry, Real Estate & Constr …
PMR Publications
Construction sector in Poland
Construction companies have not been more critical in their assessment of the construction market situation in the past five years or so. Faced with a reduced number of orders, builders announce that they will seek to win new contracts mainly by offering lower prices, which may lead to a deflation in construction. The most attractive construction segments in the years to come will include road construction, sports facilities construction and
12-10-2008 | IT, New Media & Software
Central and Eastern European Outsourcing Association
CEEOA expands into Poland
Krakow, Poland – 9th December, 2008 - Today, the Central and Eastern European Outsourcing Association (CEEOA) welcomes a new member to its ranks with the addition of ASPIRE - The Association of IT and Business Process Services Companies in Poland. Established in October 2008, CEEOA aims to promote Central and Eastern European as a competitive alternative to other global offshoring destinations and to increase services delivery quality and volume under the
Comments about openPR
Your portal is fast, simple, and easy to use. Others may have more functions but they also demand more editing time, you have to preformat the text in order to achieve a good result etc. I think openPR is really fantastic!
Andreas Knepper, wallmedien AG