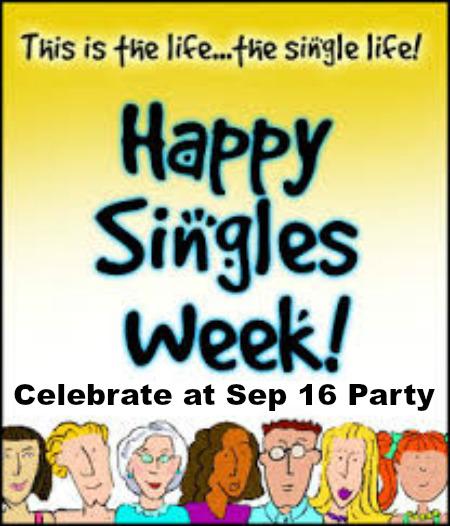 “Singles are the Rodney Dangerfields of our society,” says Rich Gosse, Chairman of The Society of Single Professionals. “They can’t get no respect. Singles are the victims of systematic discrimination, particularly in the areas of Taxes, Insurance, Retirement Benefits, Employee Benefits, Housing, and Unemployment Benefits. That’s why we are proud to be the official sponsor of National Singles Week, September 16-22, 2018, the only week dedicated to the recognition of the special contributions of America’s 110 million singles (above age 18). The first National Singles Week was in 1982. The week has been declared by official proclamation of Governors throughout America, including California, and is listed in Chase's Calendar of Events, a directory of such events for the country.”

“There are more single adults living in the United States than ever before in history,” says Mr. Gosse. In 2017, the U.S. census reported that's 45.2 percent of the American adult population that is unmarried.

Rich Gosse is America’s foremost authority on the single lifestyle. He is the author of nine books on this subject, including Singles Guide to America, You CAN Hurry Love, and A Good Man Is EASY to Find (“This is a great book!” – Oprah Winfrey). His expert advice has been featured by ABC, BBC, CBS, CNBC, CNN, The Wall Street Journal, Newsweek, Cosmopolitan, Playboy, Playgirl, Business Week, The London Times, The Australian, The New Zealand Herald, and hundreds of other media outlets worldwide. Rich Gosse is the first candidate in history to campaign on a “Fairness for Singles” Platform.

Mr. Gosse is available to the news media to discuss National Singles Week and Fairness for Singles by calling 415/479-3800. His website is www.RichGosse.com.

The Society of Single Professionals is the world's largest non-profit singles organization.

10-28-2020 | Leisure, Entertainment, Miscel …
MSM Music
New singles released by MSM Music
Magnus Svanfeldt releases a new single "How Many Ways" featuring Ben Owen on fiddle, mando and guitar. The song is built around Ben's fiddle but based on a solid dance beat. It's a fun crossover between folk and dance. The song is released November 6th on Spotrify and other major platforms https://open.spotify.com/playlist/7gJpvWTY88halJd77LtUDp?si=iWsfL0I9T_aZYRtip2LszA Karlbergsvägen 53, Stockholm, Sweden magnus@msm-music.com Magnus Svanfeldt is singer-songwriter, artist, composer, producer and engineer based in Stockholm Sweden. Magnus Svanfeldt has previously
06-03-2020 | Fashion, Lifestyle, Trends
LEA Networking Sarl
Online Dating for Green Singles
A new dating site with an ecological flair Leysin /06th June 2020. Lovearthangels founded a value-oriented online dating site & community "for a better world" at lovearthangels.com. The platform is supposed to be a community of ecologically conscious people, forming and consolidating ideas and values, thus bringing like-minded people together. In this way, users already have a common basis for a trustful and deep communication. We all know that common concerns are
12-17-2018 | Fashion, Lifestyle, Trends
Society of Single Professionals
Beyond Chemistry Keynotes San Francisco Singles Convention
FOR IMMEDIATE RELEASE Contact: Rich Gosse, 415-507-9962 BEYOND CHEMISTRY: HOW TO CREATE A LASTING RELATIONSHIP KEYNOTES SAN FRANCISCO SINGLES CONVENTION Dr. Ann Schiebert, PsyD, keynotes the annual San Francisco Singles Convention, Saturday, January 19, 2019, 7:30pm, at the Westin St. Francis Hotel on Union Square, California Ballroom 335 Powell Street, San Francisco. Her topic is “Beyond Chemistry: How to Create a Lasting Relationship.”
08-31-2011 | Business, Economy, Finances, B …
Society of Single Professionals
Singles Seek Respect During National Singles Week
“Singles are the Rodney Dangerfields of our society,” says Rich Gosse, Chairman of The Society of Single Professionals, the world’s largest non-profit singles organization. San Rafael, CA, August 30, 2011 - “Singles are the Rodney Dangerfields of our society,” says Rich Gosse, Chairman of The Society of Single Professionals, the world’s largest non-profit singles organization. “They can’t get no respect. Singles are the victims of systematic discrimination, particularly in the areas
04-19-2011 | Tourism, Cars, Traffic
Society of Single Professionals
Summer Vacation for Singles
San Rafael, CA - April 18, 2011 -- Contact: Rich Gosse, 415-479-3800 Single adults of all ages are invited to beat the single supplement and vacation with a large group of friendly singles on 10 Singles Vacations during the Summer of 2011: •Maine Windjammer Cruise, June 19-26 •Western Canada & Rocky Mountaineer Train, June 28 - July 7 •Grand European Tour, July 30 - August 10 •Scandinavia (Denmark, Norway, and Sweden), July 31 - August
04-06-2011 | Tourism, Cars, Traffic
SinglesCruise.com
Singles Travel Opportunities: Spring Break
Ft. Lauderdale, Florida ( openpr ) April 05, 2011 - Looking for the perfect vacation idea? College students will be pleased with the Spring Break options offered by Singles Cruise, a singles travel expert. Thanks to the growing popularity of cruise vacations, more and more singles are attracted to the idea of cruise vacations, and cruise lines have created special features to attract single travelers. While
Comments about openPR
OpenPR is clearly structured and remains true to its principle of confining itself to the essential parts. OpenPR has proven to be a very good and reliable partner to our media agency: Within the shortest time the releases are online and go down well with the media representatives. The success of OpenPR is reflected in the steadily increasing number of press releases. It is good that OpenPR exists!
Ursula Koslik, Director Marketing & PR, F+W Hamburg