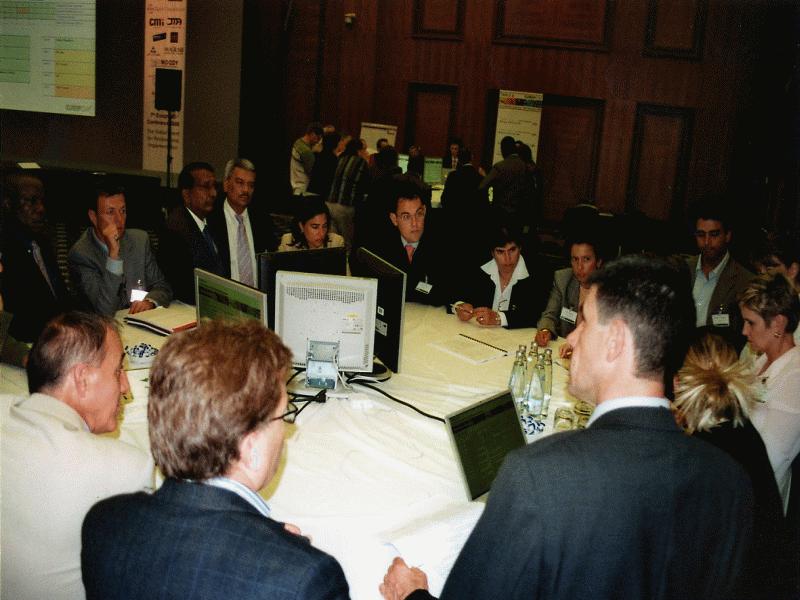 Round Table Discussions at EurepGAP Conference in Prague

Nearly 300 delegates from 41 Countries representing all Continents of the Globe were able to participate in a unique opportunity to influence the future direction and content of the EurepGAP Standard at EurepGAPs 7th Conference in Prague on 20/21 September. In a highly participative approach future proposals for the standard for the 2007 version were discussed at roundtables and a wide range of minuted suggestions were made which will now be taken forward for further evaluation in the Technical and Standards Committee.In a plenary session EurepGAP Secretary Kristian Moeller outlined the Board’s plans to respond to our members requests to see EurepGAP operate as a truly harmonised and globally relevant Good Agricultural Practice standard. These included additional measures to support the international application of the standard by working more closely with accreditation and certification bodies.At the end of the Conference Nigel Garbutt, Chairman, said “We set out to openly consult with our members and wider stakeholders about the revised protocol and to share our plans in a transparent way for the future operation of the standard. I believe we have succeeded in those objectives and we look forward to continuing along the journey towards global harmonisation with all our members, stakeholders and partners both present and future.”Claudia Meifert Public Relations/Website Administrator EUREPGAP c/o FoodPLUS GmbH Spichernstr. 55, 50672 Koeln (Cologne), Germany Tel: +49 (0) 2 21-5 79 93-82, Fax: -89 www.eurepgap.org - mailto:meifert@foodplus.org The Global Partnership for Safe and Sustainable AgricultureThe EurepGAP standard is primarily designed to maintain consumer confidence in food quality and food safety. Other important goals are to minimize detrimental environmental impacts of farming operations, optimize the use of inputs and to ensure a responsible approach to worker health and safety. EurepGAP members include retailers, producers/farmers and associate members from the input and service side of agriculture. Governance is by a Board which is chaired by an independent Chairperson. The Board also agrees on the activity plan of the organisation. Sector Committees discuss and decide upon product and sector specific issues. All committees have 50% retailer and 50% producer/supplier representation and hereby creating an efficient partnership. The work of the Committees is supported by FoodPLUS, a not for profit limited company based in Cologne, Germany, fulfilling a secretariat function for EurepGAP. EurepGAP started in 1997 as an initiative by retailers belonging to the Euro-Retailer Produce Working Group (EUREP). British retailers in conjunction with supermarkets in continental Europe were the driving forces. They reacted on growing concerns by the consumers with product safety, environmental and labor standards and decided to take more responsibility for what happened in the supply chain. On the other side the development of common certification standards were also in the interest of many producers. Those with contractual relations to several retailers complained that they had to undergo multiple audits against different criteria every year. On this background EUREP started to work on harmonized standards and procedures for the development of Good Agricultural Practices (GAP) in conventional agriculture. EurepGAP is one of the very few globally operating standardisation organizations that enjoy a high level of political and financial independence from the public sector as well as from individual member influence and shareholder agendas. To keep its independence EurepGAP does not conduct the certification process itself. Farmers or farmer groups can only be certified against the EurepGAP criteria by authorized Certification Bodies.A EurepGAP Certification Body is a company fulfilling the requirements for approved EurepGAP CBs to grant EurepGAP certification in the relevant product scope. Currently EurepGAP is working with over 100 CBs in more than 70 countries.

09-24-2018 | Business, Economy, Finances, B …
Tilhill Forestry
New partnership launched to help meet skills gap in forestry
A LEADING agriculture college has joined forces with the UK’s largest forestry and timber harvesting company to meet a growing demand for woodland workers. Coleg Cambria Llysfasi and Tilhill Forestry unveiled their new partnership - the first of its type - at the APF 2018 show held at Ragley Estate in Warwickshire today (Thursday). The aim of the Tilhill Diploma in Forestry and Woodland Management is to bring the forest industry
03-17-2017 | Fashion, Lifestyle, Trends
Business Worldwide
Global Kidswear Market 2017 : Okaidi, Gymboree, Mexx, Catmini, Tommy, Gap GAP, I …
Scope of Kidswear Market : A market study based on the "Kidswear Market" across the globe, recently added to the repository of Market Research, is titled ‘Global Kidswear Market 2017’. The research report analyses the historical as well as present performance of the worldwide Kidswear industry, and makes predictions on the future status of Kidswear market on the basis of this analysis. Get Free Sample Copy of Report Here : http://bit.ly/2nuErvP Top
02-27-2013 | Health & Medicine
Fleming Gulf Conferences
Bridging the gap – Healthcare and IT
One of the objectives of the Healthcare IT India Summit is to bring in the industry experts and regulators to converse and present the scope for the Healthcare Informatics. The summit will be held on 23th & 24th April, 2013, in Hyderabad and will focus on integrating Healthcare with Information Technology to make way for the future of Healthcare management system. Healthcare has come a long way from being perceived as
09-12-2011 | Science & Education
RDI Ltd
Distance Learning Courses fills the Gap
Many modern managers are finding that they reach a glass ceiling in their career, finding that other colleagues who hold MBAs are able to take the next step in their careers. Online education through RDI is the ideal way for working managers to balance their career, family and study all at once with distance learning. Distance learning courses from RDI include HNDs, BAs and Master’s Degrees in many subjects. Online education
11-03-2010 | Politics, Law & Society
German Center for Research and Innovation
The Widening Atlantic: Market Gap – War Gap – God Gap
NEW YORK (November 2, 2010) – The German Center for Research and Innovation (GCRI), in cooperation with the Heidelberg University Association, will host a transatlantic discussion on forces of internationalization, power shifts in an increasingly multi-polar world, and the structural differences of social policy between Germany and the United States. The event will take place on Monday, November 8, from 6:30-8:30 P.M., at the German House New York (871 United
10-29-2010 | Advertising, Media Consulting, …
PrintPlace
PrintPlace.com Wins ISO 12647 Gap Analysis Audit
Dallas, TX, October 22, 2010 -- Just this month, PrintPlace.com is able to yet again add another award to its list. Matt Louis, the Color Assurance Manager at PrintPlace.com, won the October 2010 ISO 12647 Gap Analysis Audit from KEE Consultants and sponsored by Alwan Color Expertise at the IDEAlliance G7 Summit at GraphExpo. In layman’s terms, this award recognizes PrintPlace.com, a leading online printing company, for meeting printing standards
Comments about openPR
9 o'clock: discuss press release with client, 10 o'clock: submit release to openPR, within the briefest possible time release is published and displayed in a prominent place on openPR.de. I am thrilled!
Zehra Spindler, Calypso Now! - Communication Agency