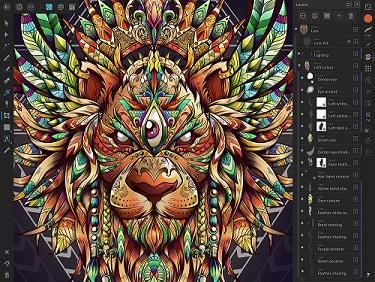 Affinity Designer for iPad brings professional vector graphic design to the iPad for the first time.Developed with input from a team of leading professional graphic designers and based on Apple Design Award-winning technology, Affinity Designer is the most ambitious creative app developed for iPad. Managing Director of developer Serif, Ashley Hewson, says: “Affinity Designer for iPad takes all the power and precision of our desktop version and converts it into a truly stunning immersive experience.“We’ve packed everything you’d expect from professional design software into an app that you can just pick up and take wherever you go, totally free from the confines of your desk or even your office.”Hewson says developing Affinity Designer for iPad meant totally reimagining the way graphic design works on a screen.“We've spent months working closely with influential artists, illustrators and designers to fine-tune the development of the app. Their input really helped us rise to the huge challenge of bringing a full graphic design experience to iPad, which means this is an app with proven professional requirements at its core.”Affinity Designer for iPad’s velvet-smooth vector tools mean curves have pinpoint precision. From initial sketches, to fleshing out a design in vector, to handing off for professional print or web, it has the workflow covered, all in one place.Professional performance demands the ability to operate seamlessly with your fellow pros. So Affinity Designer’s modern, powerful export engine covers all the major file types, whether a project is destined for print, online or another app.In a real game-changer for vector drawing, pencil stabilisation allows you to produce the smoothest and most accurate lines possible, drawing using freehand pencil and brush tools.The astonishing ability to zoom by well over one million per cent ensures complete accuracy in your work, every time.Affinity Designer for iPad is unique in offering the opportunity to switch seamlessly from vector to raster work. With around 100 brushes built in, to cover pretty much every requirement, it’s simple to add rich media texture to your designs.Naturally, Affinity Designer for iPad is optimised for the very latest iPad technology including intuitive multi-touch gestures. The iPad’s advanced Metal graphics processing delivers unreal speed and lag-free real-time edits, even on the biggest files. Apple Pencil dynamics like tilt, angle, pressure and more help bring smoothness and stability to your curves and colours. Using the Drag & Drop feature of the iPad’s Files app enables you to bring projects in and out of the app at a touch.Hewson adds: “Affinity apps are tailored for today’s technology … that means they’re fast, powerful and precise, with total lack of bloat. On iPad, the powerful graphics processing really helps us deliver eye-popping performance.”Affinity Designer for iPad supports all major formats, 16-bit per channel editing, end-to-end CMYK, ICC colour management and spot colours for professional printing.Boasting 22 non-destructive adjustment layers that preview instantly and can be edited any time, and with full support for masks, stacks and clipping layers, Affinity Designer for iPad offers the most advanced layer controls available in any vector-based app. Further, its unrivalled text engine puts the power to create exquisite typography at your fingertips.Everything you need for end-to-end UI design workflow is on hand, including unlimited artboards, a powerful Symbols tool and full asset management.It works seamlessly with the desktop version (sold separately), which was given a coveted Apple Design Award in 2015. And it becomes the second Serif app for the Apple tablet – professional image editor Affinity Photo was unveiled at WWDC2017 and is Apple’s reigning iPad App of the Year.After an introductory discount period, Affinity Designer for iPad will be priced £19.99 / $19.99 / 21,99€ subject to local currency variations) from the App Store.Affinity is a next-generation suite of award-winning software for creative professionals, comprising Affinity Designer and Affinity Photo, with Affinity Publisher coming soon.About SerifSerif’s global success with its Affinity suite of professional design and photo editing software is built on almost three decades of expertise.Affinity Designer, winner of an Apple Design Award in 2015, and Affinity Photo, named Best Imaging Software by the Technical Image Press Association in 2016, were a result of the vision of the development team at Serif’s headquarters in Nottingham, UK.Created from the ground up, with the emphasis on speed, power, accuracy and lack of bloat, Affinity Designer and Affinity Photo received a stream of glowing reviews from Mac users around the world, before being launched for Windows and iOS, where Affinity Photo is Apple's 2017 iPad App of the Year..Their creation marked a change of focus for Serif which, since 1987, had grown a reputation for quality and reliability based on the award-winning Plus range of software for PC. Powerful yet easy-to-use, the software offered low-cost alternatives to high-end publishing and graphics packages, putting professional effects and demanding publishing tasks within the reach of PC users around the world.Serif is the winner of over 200 awards internationally, with more than 6.5 million customers worldwide. The company has around 70 employees.The Software Centre Wilford Industrial Estate Nottingham NG11 7EP UK

09-03-2018 | IT, New Media & Software
Serif
Affinity Publisher beta launched – try it free
The Affinity range of professional creative software takes a step closer to completion with the launch of desktop publishing app Affinity Publisher in a free public beta today (30 August). Anyone can download and test the pre-release version of the app from https://affinity.serif.com/publisher. Affinity Publisher is the result of thousands of hours of development time dedicated by the multi-award-winning team at developer Serif’s UK headquarters. Serif are emphasising that the app is still

03-27-2019 | Business, Economy, Finances, B …
Affinity Dental
Affinity Dental Announces Addition of Dr. Harker Press Release
Affinity Dental Announces Addition of Dr. Payton Harker to Clinic’s Staff Arizona-based complete family dental care practice welcomes dental school graduate of Midwestern University; passionate professional takes pride in providing gentle care so patients experience an exceptional visit. Queen Creek, AZ – March 27, 2019 – Dr. Payton Harker, dental school graduate of Midwestern University in Glendale, Arizona, has joined the acclaimed staff of Affinity Dental, a Queen Creek-based complete
09-03-2018 | IT, New Media & Software
Serif
Affinity Publisher beta launched – try it free
The Affinity range of professional creative software takes a step closer to completion with the launch of desktop publishing app Affinity Publisher in a free public beta today (30 August). Anyone can download and test the pre-release version of the app from https://affinity.serif.com/publisher. Affinity Publisher is the result of thousands of hours of development time dedicated by the multi-award-winning team at developer Serif’s UK headquarters. Serif are emphasising that the app is still
05-11-2017 | Health & Medicine
Transparency Market Research
Affinity Chromatography Reagents Market: Company Analysis And Forecast To 2024
Global Affinity Chromatography Reagents Market: Overview Affinity chromatography, also known as bioselective adsorption, is a type of liquid chromatography for purification of a specific molecule or a group of molecules from complex mixtures. The fundamental principle comprising the method is the isolation of biomolecules on the basis of a reversible interaction between a target molecule (protein) and a specific bioligand that has been immobilized on an inert matrix. Examples of these
02-22-2017 | IT, New Media & Software
TMR - Research Reports
Affinity for Consumers Towards Home Automation Market
Home automation solutions are some of the most sought-after services in the world in the consumer markets. The demand for home automation solutions is much more pronounced in the developed economies than the emerging ones, but the latter is catching up to the competition. Automation solutions are constantly evolving these days in terms of efficiency, ability, and overall performance. A lot of regions refer to home automation solutions as an
11-05-2011 | Energy & Environment
ANTARIS SOLAR
ANTARIS SOLAR selected to be NICEIC photovoltaic affinity partner
ANTARIS SOLAR, solar technology provider with headquarters in Germany, has been selected as the PV affinity partner by NICEIC. The partnership brings together German quality with the standards of UK’s leading voluntary body for electrical installation matters. Waldaschaff, Germany, 03/11/2011. After an extensive selection process NICEIC (www.niceic.com), the UK’s leading voluntary body for electrical contractors, has selected ANTARIS SOLAR (www.antaris-solar.co.uk) to be its photovoltaic affinity partner. Distribution and shipment of
07-11-2011 | Politics, Law & Society
Affinity Law Group
Matthew Posey, JD, Joins Affinity Law Group, LLC
July 8, 2011 (St. Louis) – Matthew Posey, JD, recently joined Affinity Law Group, LLC, as an associate attorney working in the firm’s business services division. Mr. Posey’s areas of legal expertise range from mergers and acquisitions, and commercial contracts to real estate transactions and corporate governance matters. He graduated summa cum laude from Auburn University with a Bachelor’s of Art, and earned his Juris Doctorate, Order of the Coif, from Washington
Comments about openPR
OpenPR ist the nicest and most clearly laid out PR platform I have seen to this day. The press releases are displayed very nicely and clearly and without any unnecessary frills. The updates are fast and the finished release looks appealing and is clearly legible. Even with 16 years of experience one discovers new things from time to time. Congratulations!
Gabriele Ketterl, Director Marketing & PR, Menads