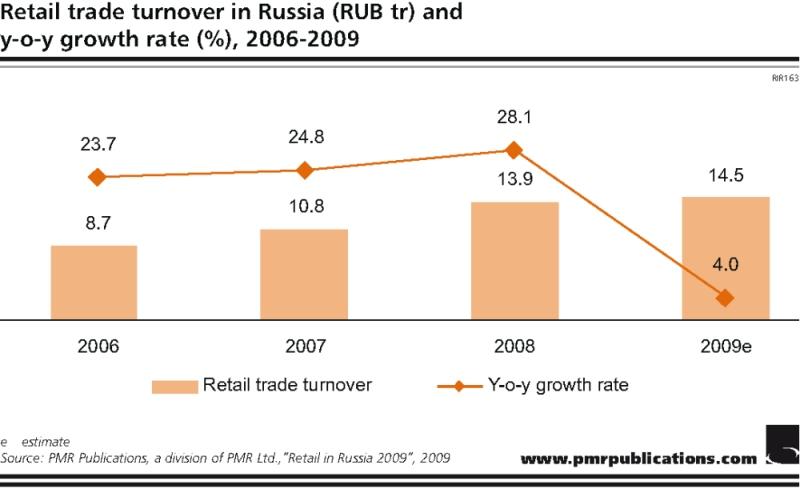 Russia’s exposure to the global financial crisis had become unquestionable by the end of 2008. After years of dynamic development, a result of the country’s stable economic growth, rising incomes and expansion of modern retail channels, the Russian economy started slowing down to encounter severe after-effects of the economic downturn in 2009. After several years of booming consumption, the Russian retail sector has been exposed to one of its hardest trials since 1998. Market players have had to face and adjust to the new reality not witnessed on such a scale for a decade. At the same time, the huge Russian retail market remains one of the most attractive globally, while the retail industry is one of the most promising areas of the country’s economy. According to PMR’s recent report, “Retail in Russia 2009”, in 2008 the Russian retail market was worth over $500bn, and rose in value by over 28% year on year. Crisis creates opportunitiesNow, at the end of 2009, it is still difficult to fully assess the future impact of the crisis on the retail industry. The difficulties which the Russian economy and thus the retail sector have faced this year were not newly arisen problems; they have been exposed and intensified due to the situation on the global markets. The crisis exposed the problems of bloating which afflicted the industry and thus cleared the market and pushed the country towards improved quality of retailing and service. Among many others, it hold back chaotic expansion on a first-come, first-serve basis and forced out weak, inefficient businesses from the scene. It made retailers focus most of all on effectiveness and exerted pressure for the introduction of clearer retail concepts. Russian retail market remains highly fragmentedDespite changes which acted in favour of consolidation of the retail market, overall, 2009 did not spark many mergers and talks of acquisition on the Russian market on either a global or domestic scale. This is how the crisis exposed that Russia is lacking good-quality, effective and not overvalued retail assets. According to PMR’s analysts, the top ten players on the scene accounted for less than 10% of the market jointly in 2008. The low consolidation level and thus low market shares of the players also make M&A deals less attractive on the global level as major international players are interested in buying assets which would give them an advantageous position on the market. Market trends make changes in the top retailers’ rankNevertheless, 2009 witnessed certain changes and shifts between major players on the retail market scene. The rapidly changing market situation along with undue reliance on credit and vast investments resulted in problems with liquidity and a growing indebtedness which eventually forced out several major retailers from the market. On the other hand, reduced purchasing power of consumers, slumping demand and changing spending patterns made further changes in the rank of the top retailers. These mostly acted in favour of grocery retailers and have also privileged the development of certain retail formats, such as discounters, and contributed to further changes in the rank of the leading retailers. Consumers’ confidence crisis While during the year Russian consumers have found a way to cope with the economic crisis, mainly by applying certain saving strategies, great caution has been demonstrated with regard to spending, which is reflected in the changing structure and value of retail trade turnover. For instance, according to PMR’s latest report, not until the beginning of 2009 did the share of food products in the total retail sales turnover start growing against the share of non-food goods. After the initial shock of the crisis, however, in Q2 2009 the consumer confidence index rebounded for the first time since the dramatic drop in Q4 2008, giving the hope that recovery could be within sight. This press release is based on information contained in the latest PMR report entitled “Retail in Russia 2009 Market analysis and development forecasts for 2009-2011.”PMR Publications (www.pmrpublications.com) is a division of PMR, a company providing market information, advice and services to international businesses interested in Central and Eastern European countries and other emerging markets. PMR key areas of operation include market research (through PMR Research), consultancy (through PMR Consulting) and business publications (through PMR Publications). With over 13 years of experience, highly skilled international staff and coverage of over 20 countries, PMR is one of the largest companies of its type in the region.PMR Publications ul. Supniewskiego 9 31-527 Krakow, PolandKarolina Kaminska Marketing Department: tel. /48/ 12 618 90 00 e-mail: pmr.marketing@pmrcorporate.com www.pmrpublications.com