Press release from: The Embassy of Uzbekistan in Germany

/ PR Agency: Presservice of the Enbassy of Uzbekistan in Berlin 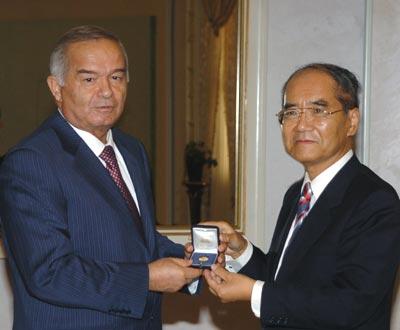 President of Uzbekistan Islam Karimov received UNESCO Director General Koïchiro Matsuura in Tashkent on Friday.During the negotiations, the sides discussed perspectives of cooperation between Uzbekistan and UNESCO.”We highly value the developing cooperation with UNESCO and your support of the initiatives of Uzbekistan,” Islam Karimov said at the meeting. Koïchiro Matsuura awarded Islam Karimov with UNESCO’s Borobudur Gold Medal.The medal was introduced by UNESCO in 1983 and is called so in the name of the famous Buddhist temple in central Java, which dates from the 8th and 9th centuries. The monument was restored with UNESCO`s help between 1972 and 1983. Included in UNESCO’s World Heritage List, Borobudur is annually visited by 2.5 million tourists.The Borobudur medal was awarded to the President of Uzbekistan for his great contribution to strengthening friendship and cooperation between the nations, development of cultural and religious dialogue, and supporting cultural diversity.Uzbekistan became a member of UNESCO in 1993, and the organization opened its office in the country three years after that. UNESCO provides wide assistance to the country in the fields of education, restoration of historical monuments, preservation of cultural heritage and others.The Embassy of Uzbekistan Perleberger Street 62 10559 Berlin Phone: 030 39 40 98 -0/13 Fax: 030 39 40 98 62 E-Mail: botschaft@uzbekistan.de www.uzbekistan.dewww.openpr.de www.uza.uz http://jahon.mfa.uz

More Releases from The Embassy of Uzbekistan in Germany

09-11-2012 | Business, Economy, Finances, B …
The Embassy of Uzbekistan in Germany
Angren prepares for investors
In 2013-2015 Uzbekistan will allocate over $ 59 million for the development of transportation, manufacturing and engineering infrastructure in special industrial zone (SIZ) Angren. The government approved a special program to address these problems with a total value of approximately $ 59.4 million of which $ 13.4 million will be allocated to create electricity network, $ 3.5 million - for gas supply, $ 28.1 million - water supply and wastewater drainage,
09-11-2012 | Sports
The Embassy of Uzbekistan in Germany
Basketball Pioneers
Popular game grows even more popular across regions. Leaders of the basketball federations of five neighboring countries – members of the newly established new continental sub-zone, the Central Asian Basketball Association (SABA) – met in Tashkent. “Emergence of SABA can be called a breakthrough in the whole system of the continental sports organizations,” said Abay Alpamysov, president of the new organization. “Prior to the SABA Founding Congress that took place this June
08-10-2007 | Politics, Law & Society
The Embassy of Uzbekistan in Germany
To the 16th anniversary of Independence of the Republic of Uzbekistan
SIXTEEN YEARS: ALONG THE PATH OF PROFOUND CHANGES AND PROFOUND REFORMS This year the people of Uzbekistan are going to celebrate the 16th anniversary of Independence, the country’s most important holiday, with a special pride and inspiration. Undoubtedly, the traversed path - the path of independent development has been marked by epochal transformations, establishment of the statehood, the rebirth of the national self-consciousness. At the moment, Uzbekistan having stepped on the way
08-08-2007 | Politics, Law & Society
The Embassy of Uzbekistan in Germany
On approving Statute on the family-type children’s houses
With an aim to ensure the protection of rights and interests of children left without a parental care, create for them the necessary conditions close to a family atmosphere, develop the family-type children’s houses as well as implement the Resolution of the President of Uzbekistan of January 23, 2007 №PP-573 “On the State program “Year of Social Protection” the Cabinet of Ministers of the Republic of Uzbekistan approved the Statute

03-25-2019 | Tourism, Cars, Traffic
TAT Newsroom
UNESCO-inscribed Khon performance added to Grand Palace ticket
Bangkok, 25 March, 2019 – The Tourism Authority of Thailand (TAT) is pleased to inform all tourists to Thailand that the 500 Baht entrance ticket to the Grand Palace in Bangkok now includes a Khon performance at the Sala Chalermkrung Royal Theatre. Purchased onsite at the Grand Palace, the ticket has until now covered entry to the Grand Palace, Wat Phra Kaew (the Temple of the Emerald Buddha) and Wat Phra
09-09-2016 | Science & Education
JMA Pilani Rajasthan
UNESCO International Literacy Day Golden Jubilee Celebrations at JMA Pilani
Fifty years ago, UNESCO officially proclaimed 8 September as International Literacy Day to actively mobilize the international community and to promote literacy as an instrument to empower individuals, communities and societies and 2016 marks the 50th anniversary of the same. Many ways of joining the celebrations include by Donating books and reading materials to a local school or community centre, starting a reading club, volunteering to teach literacy classes in local
02-23-2012 | Tourism, Cars, Traffic
the Digital Content Editor (tDCE)
UNESCO to Investigate World Heritage Site in Cape Town
The Chapmans Peak saga unfolding in Cape Town, South Africa between Murray & Roberts, toll operator Entilini, Hout Bay residents and the Civil Rights Action Group (Crag) continues to flow. Toll operator Entilini and its construction partner Murray & Roberts, will proceed with their plans to build Entilini, a brand new office to be situated on the Hout Bay (North) side of the scenic Chapmans Peak, a world heritage
07-05-2007 | Advertising, Media Consulting, …
BITS Pilani
UNESCO has no Links with New 7 Wonders List
In the case of News, one should always wait for the sacrament of confirmation. In a news titled Bollywood Roots for the Taj, attributed to IANS Indo-Asian News Service and published in Khabrein.info, Mangalorean.com, Monsters and Critics.com, NewKerala.com, Daily News & Analysis (DNA), Kalinga Times, NowRunning.com, NEWSpost India etc, it is stated that UNESCO is expected to announce the new 7 wonders list July 7 in Portugal\'s Benfica Stadium. This gives
09-11-2006 | Politics, Law & Society
The Embassy of Uzbekistan in Germany
UNESCO head receives Uzbek university’s honorary doctor title
Director General of UNESCO Koïchiro Matsuura visited the University of World Economy and Diplomacy (UWED) in Tashkent on Friday, where he met the professors and students of the university. UWED rector Hamidulla Karomatov awarded UNESCO head with the title of the honorary doctor of the university. This title has been awarded to a number of noted politicians and statesmen, as well as leading scientists. While in the Uzbek capital, Koïchiro Matsuura visited the
10-03-2005 | Science & Education
Worldheritage-Forum
World-Wide exchange on UNESCO World Heritage Topics
The number of UNESCO World Heritage Sites and the public interest in it increased constantly in the last years. The "Convention Concerning the Protection of the World Cultural and Natural Heritage", which is signed by 180 states is now protecting 812 individual sites. These consist of 628 cultural heritage sites, 160 natural heritage sites and 24 sites which are both cultural and natural heritage sites. For the protection of
Comments about openPR
OpenPR is clearly structured and remains true to its principle of confining itself to the essential parts. OpenPR has proven to be a very good and reliable partner to our media agency: Within the shortest time the releases are online and go down well with the media representatives. The success of OpenPR is reflected in the steadily increasing number of press releases. It is good that OpenPR exists!
Ursula Koslik, Director Marketing & PR, F+W Hamburg