Press release from: The Embassy of Uzbekistan in Germany

/ PR Agency: The Embassy of Uzbekistan in Germany 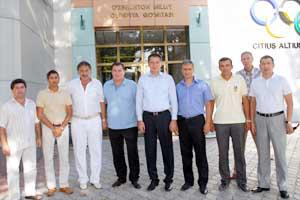 Popular game grows even more popular across regions.Leaders of the basketball federations of five neighboring countries – members of the newly established new continental sub-zone, the Central Asian Basketball Association (SABA) – met in Tashkent.“Emergence of SABA can be called a breakthrough in the whole system of the continental sports organizations,” said Abay Alpamysov, president of the new organization. “Prior to the SABA Founding Congress that took place this June in Almaty, Kazakhstan (attended by the President and Secretary General of FIBA-Asia), the national basketball federations of Kazakhstan, Kyrgyzstan, Uzbekistan, Tajikistan and Turkmenistan were part of the Central Asian zone – the largest one on the continent, which included 13 countries. Naturally, it was extremely difficult to go through on the continental arena in such a huge competition, and this hindered the development of basketball in our countries. Now everything is in our hands: the competitions, coaches, refereeing, workshops, and we can say about that our region received great opportunities to realize its potential in basketball. It’s, a lot of work to do yet. But when you see real prospects, you can succeed.”Indeed, it was a constructive dialogue: there are now judicial, youth, technical and 3vs3-game committees. There is a draft project of the youth league, calendar and plan for 2013. And the Secretary General of the Basketball Federation of Uzbekistan Ravshan Ganiev is elected as SABA vice president.Usbekistan TodayEmbassy of Uzbekistan Press-service Perleberger Str. 62 10559 Berlin Tel.: +4930/39409813 www.uzbekistan.deThe Embassy of the Republic of Uzbekistan is located in a historic building, which is under the protection of the German Foundation for Monument Conservation. ... for more information: www.uzbekistan.de

You can edit or delete your press release Basketball Pioneers here

More Releases from The Embassy of Uzbekistan in Germany

09-11-2012 | Business, Economy, Finances, B …
The Embassy of Uzbekistan in Germany
Angren prepares for investors
In 2013-2015 Uzbekistan will allocate over $ 59 million for the development of transportation, manufacturing and engineering infrastructure in special industrial zone (SIZ) Angren. The government approved a special program to address these problems with a total value of approximately $ 59.4 million of which $ 13.4 million will be allocated to create electricity network, $ 3.5 million - for gas supply, $ 28.1 million - water supply and wastewater drainage,
08-10-2007 | Politics, Law & Society
The Embassy of Uzbekistan in Germany
To the 16th anniversary of Independence of the Republic of Uzbekistan
SIXTEEN YEARS: ALONG THE PATH OF PROFOUND CHANGES AND PROFOUND REFORMS This year the people of Uzbekistan are going to celebrate the 16th anniversary of Independence, the country’s most important holiday, with a special pride and inspiration. Undoubtedly, the traversed path - the path of independent development has been marked by epochal transformations, establishment of the statehood, the rebirth of the national self-consciousness. At the moment, Uzbekistan having stepped on the way
08-08-2007 | Politics, Law & Society
The Embassy of Uzbekistan in Germany
On approving Statute on the family-type children’s houses
With an aim to ensure the protection of rights and interests of children left without a parental care, create for them the necessary conditions close to a family atmosphere, develop the family-type children’s houses as well as implement the Resolution of the President of Uzbekistan of January 23, 2007 №PP-573 “On the State program “Year of Social Protection” the Cabinet of Ministers of the Republic of Uzbekistan approved the Statute
07-31-2007 | Politics, Law & Society
The Embassy of Uzbekistan in Germany
Tashkent – the pearl of the Islamic civilization
On August 14-15 Tashkent and Samarkand will host an international conference for the mass media in connection with Tashkent's having been announced as the capital of Islamic culture in 2007. The conference is expected to be attended by around 100 foreign scientists, state and religious figures from over thirty countries. The National Press Center of Uzbekistan hosted a press-conference to focus on the preparations for and holding of the upcoming