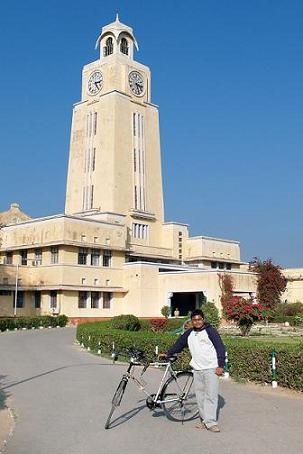 Irrespective of the fact that Albert Einstein had a bicycle or not, the quote that has been widely circulating all over about the path breaking theory of relativity is “I thought of that while riding my bike." No one has any doubt that the bicycle is a tremendously efficient means of transportation. Without doubt it takes less energy to bicycle one mile than it takes to walk a mile. One hundred calories can power a cyclist for three miles, but it would only power a car 280 feet (85 meters). Most cyclists have no hesitation in stating that it not only improves their physical health but also their mental outlook resulting in a sense of accomplishment and a feeling of independence. It goes without saying that cycling is more than a sport or even a mode of transportation and more correctly it's a passion for many.If the clarion call by Grant Petersen who has been called everything from iconoclastic retro grouch to the messiah of reason in the cycling industry goes as “"Think of bicycles as rideable art that can just about save the world", according to John F Kennedy “Nothing compares to the simple pleasure of a bike ride."In Europe, Germany has the reputation of offering a wide variety of landscape and terrain from the flat lands of the north to the alpine mountains of Bavaria for great bicycle holidays.Abhijeet Mishra native of Lucknow is presently doing his third year B.E. (Hons) Mechanical Engineering at Birla Institute of Technology and Science – BITS Pilani. When he was in Class three he learnt on his own how to ride a bicycle and his father who is an officer in Non - Conventional Energy Development Agency – NEDA Government of Uttar Pradesh presented him a cycle the very next year to be precise on 25th January 1998. His mother who is an architect has all along encouraged his cycling interests. From the second Monday in July 2002, when Abhijeet entered Class Nine, he started going by cycle to his school (the famous City Montessori School) which was about 9 Kms away from his residence. After clearing the online entrance examination BITSAT which in his own words was conducted by BITS Pilani without any hitch, from July 2007 Abhijeet commenced his student years at Pilani. 13th September 2008 which is best forgotten for the Delhi Bombings is indeed unforgettable to him as he bought his Hero Hawk Nu Age bike at the very same Delhi. He feels that while at Pune, Bangalore etc cycling is a respected activity, in North India most tend to look down upon a cyclist. On 2nd April 2009, Abhijeet did his first cycle trip to Delhi 235 Kms distance from Pilani via Loharu – Dadri – Jajjar in 11 hrs 35 mins. On 27th June 2009, he did the cycling from Bhilai SAIL Steel Plant where he was doing his summer 2 months of Pracice School – I to Nagpur a distance of 255Kms in 15 hrs. On 19th July 2009 Abhijeet did Kanpur to Lucknow cycling a distance of 84 Kms in 3 hrs and 20 mins.On August 2nd, 2009, Abhijeet did cycling from Pilani to Delhi via Loharu – Bhiwani – Rohtak in 9hrs 45 mins. On August 14th, 2009, Abhijeet did cycling from Pilani to Jaipur a distance of 225 Kms in 11 hrs. On December 15th 2009, Abhijeet is all geared up to do cycling to Lucknow from Pilani a distance of 660Kms via Loharu – Mahendragarh – Rewari – Palwal – Aligarh – Etah -Kannauj – Bangarmau This dreamer performer achiever Abhijeet Mishra from BITS Pilani has taken up cycling as a mission with passion to prove that there are no dreams too large, no challenge unbeatable and no frontiers beyond reach. When asked about what is his motive behind this arduous Pilani to Lucknow cycling mission, Abhijeet whose Zodiac is Scorpio with a straight face said that considering what is happening at the ongoing UN Climate Change Conference at Copenhagen, he would prefer it to be for Save Earth campaign. The otherwise tough Abhijeet gets saddened when he reads about Human Rights Violations and discriminations of any kind.Believe it or not, Abhijeet has a fascination for Indian Railways and would like to take his career option to serve the same after his graduation. It goes without saying that cycling legend Lance Armstrong is Abhijeets’s role model and source of inspiration.Any individual / organization interested in sponsoring Abhijeet Mishra’s Pilani to Lucknow cycling trip may contact Email abhijeetm29@gmail.com Mobile 0960221460About BITS Pilani: The Birla Institute of Technology and Science - BITS Pilani is a Deemed to be University established vide Sec.3 of the UGC Act, 1956 under notification No. F.12-23/63.U-2 of June 18, 1964. NAAC - National Assessment and Accreditation Council reaccredited BITS with 3.71 CGPA out of 4 and awarded "A" grade "Very Good" status. It is indeed a matter of pride that for the year 2009, BITS Pilani has been ranked among the top ranking universities along with IITs in various Magazine surveys such as India Today, Outlook, LiveMint etc. BITS offers degrees in various disciplines presently at Pilani, Dubai, Goa and Hyderabad campuses. BITS Pilani has done pioneering work in industry university collaborations in terms of Practice School and Work Integrated Learning Programmes. Alumni of the Institute who are Proud to be BITSians and ambassadors for Brand BITS Pilani are spread across all continents from Australia to America.DR BR Natarajan Professor & Vice President BITSAA BITS Pilani Rajasthan 333031 India 333031 Phone 91-1596-242210 Fax 91-1596-244183 Email brnt(at)bits-pilani.ac.in Website http://www.bits-pilani.ac.in