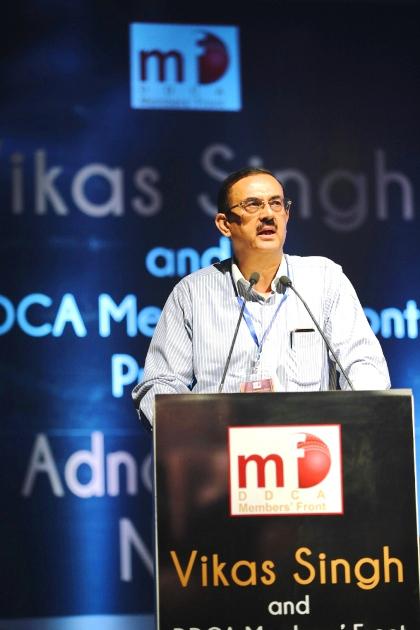 The Members’ Front, DDCA & Mr. Vikas Singh, Presidential Candidate Host a Musical Evening of Camaraderie with Adnan Sami Mr. Vikas Singh and The Members’ Front of DDCA hosted an evening of Music and Camaraderie with Adnan Sami for the DDCA members here in New Delhi last night. The evening started off with ceremonial lamp-lighting by all the Nominated Candidates of The Members’ Front. This was followed by stand-up acts by comedians who filled the auditorium with mirth to start proceedings. The good cheer was kept going till the audience was left spell-bound by the Adnan Sami’s soulful voice, who took the stage and mesmerized the large audience at the massive Siri Fort Auditorium on the evening of June 18th. The enthusiastic 600+ DDCA Members who came with families to support Mr. Vikas Singh and Members’ Front thoroughly enjoyed the unique musical evening. The audience consisted of almost 1500 people.Further, Mr. Vikas Singh and The Members’ Front shared their vision for DDCA and about world-class cricket development. Several members of the DDCA Members’ Front who are keen to revamp facilities and processes in the Association as well as at the Feroz Shah Kotla Ground had pressed upon Mr. Singh to contest these elections due to his far reaching vision and organizational capabilities that will help to incorporate benchmark systems and processes akin to the best operated cricket associations and stadiums across the world. Presidential Candidate, Mr. Vikas Singh, who is a Senior Advocate and President of the Supreme Court Bar Association addressed the audience and shared his vision and detailed plans for DDCA, its cricket teams and facilities, “It is part of my mission to steer the DDCA towards professionalism, transparency and excellence. Cricket is followed like a religion in our country. India being the cricketing capital of the world and Delhi being the capital city, the DDCA should reflect the highest values and amenities thereby benefitting cricketers as well as members. We are therefore bringing in new faces that will inject and infuse new ideas to improve administration at DDCA. We will add several quality amenities, services and facilities that have been missing at DDCA so far, especially for members, cricketers, clubhouse as well as at the Feroz Shah Kotla stadium. Having travelled across the world several times and seen from close quarters the best cricketing facilities as well as the manner in which clubs are maintained, I aim to contribute and inculcate certain value systems so that the DDCA becomes a world class cricket body with facilities comparable to any in the world. It is important that members and fans become proud of the Delhi cricket structure and its facilities. My firm message to all Members is to say, Enough is Enough! We Members deserve a whole lot better than what has been dished out in the name of administration for the past several years.” The Members’ Front Team consists of: Mr. Vikas Singh, Presidential Candidate, Mr. Arvinder Singh Lovely, Vice Presidential Candidate; Mr. Sandeep Chaudhary, Candidate for General Secretary; Dr. Ahmed Tamim, Practicing Doctor, Philanthropist, Social Worker and Candidate for Joint Secretary; Mr. Bhagwan Verma, Founder Member of Banks Sports Board and Candidate for Treasurer; Mr. Surinder Khanna, Ex-Cricketer and Candidate for Cricket Director; Ms. Devyani Singh, Advocate, Sportsperson and Candidate for Woman Director; Mr. Rajender Kumar Tandon, Senior Artist, DAVP and DPD, Ministry of I&B and Candidate for Director; Mr. Rajendra Kumar, Ex-MLA and Candidate for Director; Mr. Praveen Kr. Soni, Media & Broadcast Manager, DDCA and Candidate for Director; Mr. Sanjiv Bali, Member of Advisory Committee for Food & Supplies Department & DESU and Candidate for Director; Mr. Sunil K Goel, Member, Delhi High Court Bar Association and Candidate for Director.Former India player and Candidate for Cricket Director in DDCA Elections 2018, Mr. Surinder Khanna shared his thoughts, “We are confident about our Members’ Front team winning the forthcoming elections. Members feel that enough is enough of the old system and want a positive change. We know Mr. Vikas Singh will bring his financial and administrative skills to bring in the much needed reforms, transparency and professionalism in DDCA, thereby making it a world class organization within 3 years. Besides, I will focus my personal energies on recognizing and nurturing new talent and producing many state and national players over the years.”The upcoming DDCA Elections of the Executive Committee will be held on Saturday, 30th June 2018 at Feroz Shah Kotla. For Further information please contact PR Grid: Ajay Garkal/Jitendra Parmar : 911141431044, 41431455, 9810632344, 9818410072Mr. Vikas Singh is the Presidential Candidate for upcoming DDCA Elections. He is also the President of the Supreme Court Bar Association (SCBA).Jitendra Parmar PR Grid W-127, Greater Kailash -1 New Delhi 110048

06-08-2017 | IT, New Media & Software
Jobbatical
Jobbatical brings candidate rejection messaging to Jobbatical.com
Tallinn, Estonia – June 8, 2017 – Jobbatical product innovation continues with the ability to send rejection messaging to candidates directly from our platform. Jobbatical continues to make it easier for hiring managers to source and evaluate applicants on our platform. Now we’ve implemented an easy to use rejection function with the option to use a template letter or personalized response to reject the candidate. As a hiring manager, it’s
03-23-2012 | Business, Economy, Finances, B …
Americans for Legal Immigration PAC (ALIPAC)
ALIPAC Launches 2012 Candidate Endorsements & Support Operations
(For National Release) Raleigh, NC, USA (March 23, 2012) -- "ALIPAC endorsed candidates represent the members of the US Congress and challengers who are aligned with the large majority of Americans who want more done to stop and reverse illegal immigration in our nation," said William Gheen, President of ALIPAC. "We are going to work hard to make sure that voters in these districts know that our endorsed candidates stand
09-29-2011 | Politics, Law & Society
A Real Live Person Twenty-Four Hours Seven Days®
YorkSouthWeston.com promotes Conservative MPP candidate
Toronto – September 28, 2011 – The website YorkSouthWeston.com has been created to provide information about the conservative candidate for the riding of York South —Weston. Her name is Lan Daniel. This is not an official website of Lan Daniel or the Progressive Conservative Party of Ontario. The site was created by a fellow party member to make it easy for the people of York South — Weston to assist with
06-21-2007 | Politics, Law & Society
Imperato For President 2008
Presidential Candidate LIVE Broadcast
West Palm Beach, FL – June 20, 2007 - Today, Imperato for President 2008, the official Presidential Campaign Committee for Daniel Imperato, announced that they will be holding their sixth presidential live broadcast this Wednesday June 20, 2007 at 8pm EST. Daniel Imperato is currently an independent candidate for the office of President of United States of America, and is seeking the nomination from the Libertarian Party. During this broadcast, Imperato
03-29-2007 | IT, New Media & Software
AVnex Ltd.
Music Morpher Gold 4.0 Release Candidate Update
(29 Mar 07)- MusicMorpher.com – AVnex Ltd. is working to finish its music morphing line. Last week, the company released a near-final version of Music Morpher Gold 4.0. More information can be found at musicmorpher.com. The RC is not offered to everybody. The company has made it available for their Music Morpher Gold 3.0 plus version owners. They are entitled to fully test all the new as well as improved features
02-14-2007 | Politics, Law & Society
Imperato For President
Orden Bonaria Knights 2008 Presidential Candidate
New York, NY – February 13, 2007 – Today 2008 Presidential Candidate Daniel Imperato announced that he has been knighted by the Orden Bonaria. Orden Bonaria is an internationally recognized humanitarian organization that is officially recognized by the United Nations and many other countries around the world. Famous honorary members of the Orden Bonaria include the former President of South Africa, Nelson Mandela, and former United States
Comments about openPR
Your portal is fast, simple, and easy to use. Others may have more functions but they also demand more editing time, you have to preformat the text in order to achieve a good result etc. I think openPR is really fantastic!
Andreas Knepper, wallmedien AG