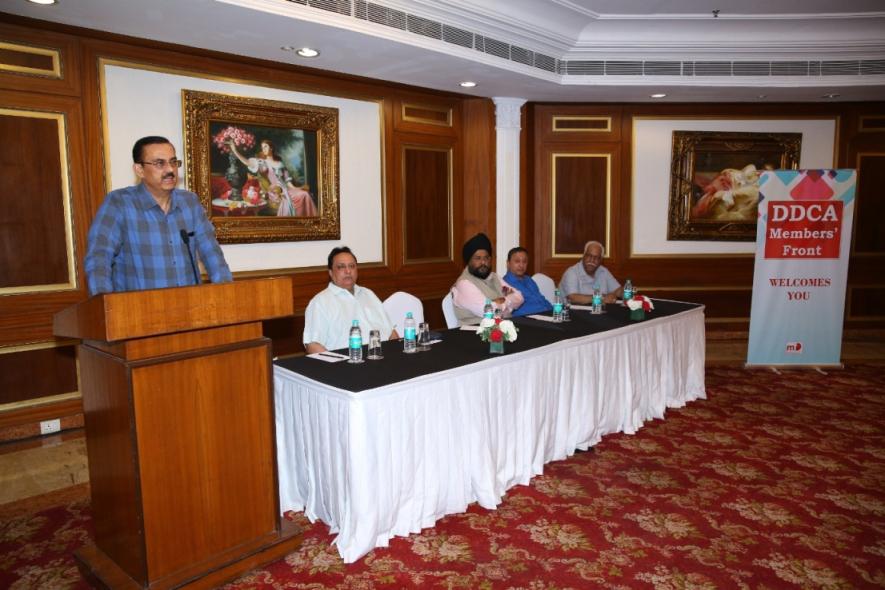 Mr. Vikas Singh, Presidential Candidate, DDCA Has Detailed Interaction With Media & DDCA Members Ahead of Elections Mr. Vikas Singh and The Members’ Front of DDCA shared their vision before the forthcoming DDCA elections by addressing the media and DDCA members here in New Delhi last night. Mr. Vikas Singh had recently filed his candidature for the President’s post of Delhi and District Cricket Association (DDCA). The election is held every three years and the forthcoming elections are on June 30. Several members of the DDCA Members’ Front who are keen to revamp facilities and processes in the Association as well as at the Feroz Shah Kotla Ground had pressed upon Mr. Singh to contest these elections due to his far reaching vision and expertise that will help to incorporate benchmark systems and processes akin to the best operated cricket associations and stadiums across the world. The Press Conference in this regard was addressed by Mr. Vikas Singh, Senior Advocate and Presidential Candidate and other Nominated Members for Executive Committee at the forthcoming DDCA Elections. Mr. Singh brought to light his vision and detailed plans for DDCA, its cricket teams and its facilities. The Press Conference was followed by dinner for the attending media and members of DDCA. Mr. Vikas Singh, Senior Advocate and President, Supreme Court Bar Association stated, “It is part of my mission to steer the DDCA towards professionalism, transparency and excellence. First up, the aim is to bring in complete transparency in the selection of teams that represent Delhi. Sadly, at present merit and talent are forced to take a back seat at times. Further, I believe that with India being the cricketing capital of the world and Delhi being the capital city, the DDCA should reflect the highest values and amenities thereby benefitting cricketers as well as members. Having travelled across the world several times and seen from close quarters the best cricketing facilities as well as the manner in which clubs are maintained, I aim to contribute and inculcate certain value systems so that the DDCA becomes a world class cricket body with facilities comparable to any in the world. It is important that members and fans become proud of the Delhi cricket structure and its facilities. I also feel that sports journalists must get priority for DDCA membership as they are important for the growth of the sport.” The DDCA Members’ Front aims to restore the past glory of DDCA when it was considered in the higher echelons of the cricket world as a formidable cricket playing association with talent and facilities to match. Mr. Vikas Singh’s team includes, Mr. Arvinder Singh Lovely, Long-time DDCA Member and Vice Presidential Candidate; Mr. Sandeep Chaudhary, Sportsman and Candidate for General Secretary; Dr. Ahmed Tamim, Practicing Doctor, Philanthropist, Social Worker and Candidate for Joint Secretary; Mr. Bhagwan Verma, Founder Member of Banks Sports Board and Candidate for Treasurer; Mr. Surinder Khanna, Ex-Cricketer and Candidate for Cricket Director; Ms. Devyani Singh, Advocate, Sportsperson and Candidate for Woman Director; Mr. Rajender Kumar Tandon, Senior Artist, DAVP and DPD, Ministry of I&B and Candidate for Director; Mr. Rajendra Kumar, Ex-MLA and Candidate for Director; Mr. Praveen Kr. Soni, Media & Broadcast Manager, DDCA and Candidate for Director; Mr. Sanjiv Bali, Member of Advisory Committee for Food & Supplies Department & DESU and Candidate for Director; Mr. Sunil K Goel, Member, Delhi High Court Bar Association and Candidate for Director.Among the luminaries who attended the event were, Host, Mr. Vikas Singh, Mr. Arvinder Singh Lovely, Dr. Ahmed Tamim, Mr. Surinder Khanna, Ex-cricketer besides, Team DDCA Members, Cricketers and Media. Mr. Vikas Singh would also like to bring several quality amenities and services that have been missing at DDCA so far. Immediate action if elected would be aimed at a Sports medicine clinic, state-of-the-art gyms with instructors and nutritionists, oxygen room, heated swimming pools, billiards, table tennis, flood lit tennis courts, spa and yoga besides bar and fine-dining restaurants at reasonable rates. Also on the anvil is upgraded serviced accommodation for members and their guests at reasonable rates. , According to Mr. Arvinder Singh Lovely, Vice Presidential Candidate, "Mr. Vikas Singh’s extensive experience will prove invaluable in assisting us to meet the challenges and opportunities of improving the current structure of DDCA. He is well known as a fiercely independent personality in his quest for excellence and never compromises with mediocrity. Hence, we are confident that all present and future Delhi players and DDCA Members will benefit exponentially from the skills and integrity he brings to the table. This is indeed a path breaking moment for our Association." The upcoming DDCA Elections of the Executive Committee will be held on Saturday, 30th June 2018 at Feroz Shah Kotla. The elections will take place as per the Lodha Committee recommendations, Conducted by Justice Vikramjit Sen, Administrator at DDCA, and under the Supervision of the Electoral Officer, Mr. Rakesh Mehta, Former State Election Commissioner, Delhi and Chandigarh. Importantly, this year for the first time the election will be held without the proxy voting system, under which members were earlier not required to be present to cast their ballot. For Further information please contact PR Grid: Ajay Garkal/Jitendra Parmar : 911141431044, 41431455, 9810632344, 9818410072Mr. Vikas Singh is the President of the Supreme Court Bar Association (SCBA). He was also the Additional Solicitor General of India earlier.Jitendra Parmar PR Grid W-127, Greater Kailash-1 New Delhi 110048

You can edit or delete your press release Mr. Vikas Singh, Presidential Candidate, DDCA Has Detailed Interaction With Media & DDCA Members Ahead of Elections here