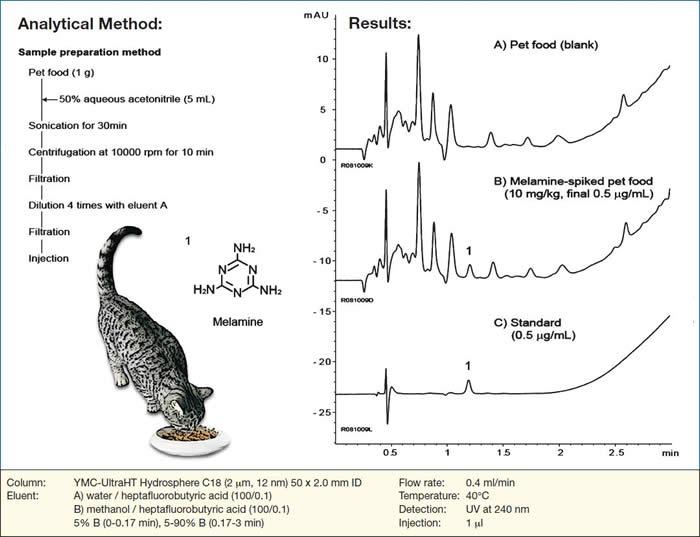 Melamine (sometimes confused with the plant and animal compound, melanine or another compound, melanin) is an industrial chemical used in the manufacture of plastic products. Despite that, tests showed that a number of milk companies have used it in processing milk to artificially increase the apparent protein content by addition of non-protein nitrogen and so allowing illegal dilution of the product with water with a corresponding increase in sales value. The problem is that melamine forms crystals of melamine cyanurate from aqueous solutions when mixed with cyanuric acid (which forms naturally by hydrolysis of melamine). These low solubility, virtually indigestible crystals concentrate in the renal microtubules and form large numbers of round spoke-like, yellow crystals, damage the renal cells and ultimately kidney failure. Recently, more and more attention has been focussed on melamine in milk and food products (including, for example, chocolate). The most distressing incident occurred in the summer of 2008 when more than 54,000 babies became seriously ill and four died in China due to suspected milk formula. However, earlier in 2007 the FDA reported that an estimated 8,500 cats and dogs died after eating melamine-contaminated pet food. In order to avoid further accidents involving melamine contamination, it is essential to provide an analytical method, which monitors the level of melamine without compromising resolution due to excessive background signals from the sample matrix. YMC have developed an ultra-fast HPLC method which also can be transferred to LC/MS detection and a 2 μm stationary phase designed to analyse polar compounds, YMC-UltraHT Hydrosphere C18.This method has been successfully developed using 2 μm Hydrosphere C18. The application allows analysis of complex matrices in less than 2.5 minutes. The peak of interest for melamine shows baseline separation from other components, allowing easy, fast quantification of trace contamination.For further information please feel free to contact Dr. Friederike Becker.From headquarters located in Kyoto, Japan, YMC has gradually and consistently matured to a level of international recognition, specifically within the pharmaceutical and biotech world, as one of the leading suppliers of analytical and process-scale silica-based stationary phases for High Performance Liquid Chromatography, preparative equipment, custom purification and method development. New: Micro Reactor / Flow Chemistry scalable to production scale! Qualified technical support and backup is available through operations in Japan, the United States (for the "Americas"), India, China and Germany (for Europe, Africa and the Middle East). www.ymc.deYMC Europe GmbH Frau Dr. Friederike Becker Schöttmannshof 19 46539 Dinslaken GermanyTe.: +49 (0)2064-427 261 E-Mail: becker@ymc.de www.ymc.de

11-16-2011 | Science & Education
YMC Europe GmbH
Versatile (U)HPLC-hybrid columns, now also in C8!
With YMC-TriArt challenging pH-stability and high temperatures are no longer a limitation to your work. Above all due to its unique particle composition a balanced hydrophibicty and silanol activity are achieved which makes YMC-TriArt a “First Choice” column in method development! This new, innovative stationary phase YMC-TriArt fulfils all the requirements for modern, highly demanding chromatographic separations: - Versatility: balanced hydrophobicity and silanol activity. - Flexibility:
11-16-2011 | Science & Education
YMC Europe GmbH
IEX columns for material screening and method development
Are you sure your column has been packed the best possible way? Until now the extremely efficient YMC-BioPro IEX phases have only been available as bulk media. Still it was introduced into many screening procedures in industry, because of its high quality. Now it is even easier to evaluate its extremely good cost-efficiency ratio: YMC announces the introduction of pre-packed IEX columns. The columns are always perfectly packed and, after equilibration
04-14-2011 | Science & Education
YMC Europe GmbH
The YMC HG-series: High Quality low price silica material
Is it possible to get the best of both worlds? Better quality at better price? It is possible with the new YMC HG-grade series of silica based materials! These new phases combine the trusted selectivity of the YMC*gel materials with a new high performance silica base. The most obvious advantage of the new silica base is its extended mechanical stability which is due to an improved production process for the base
02-22-2011 | Science & Education
YMC Europe GmbH
Easy handling with Kronlab Pilot columns
Advanced service and cleaning for Kronlab glass Pilot columns As a long-time specialist in the field of glass Pilot columns for lab and production separations, Kronlab specialists are continuously in close dialogue with chromatography end-users from Pharma/Biotech as well as research and education fields. This leads to numerous technical and practical modifications which make your every-day work a lot easier. The latest innovations are the stands of the Kronlab glass Pilot columns.