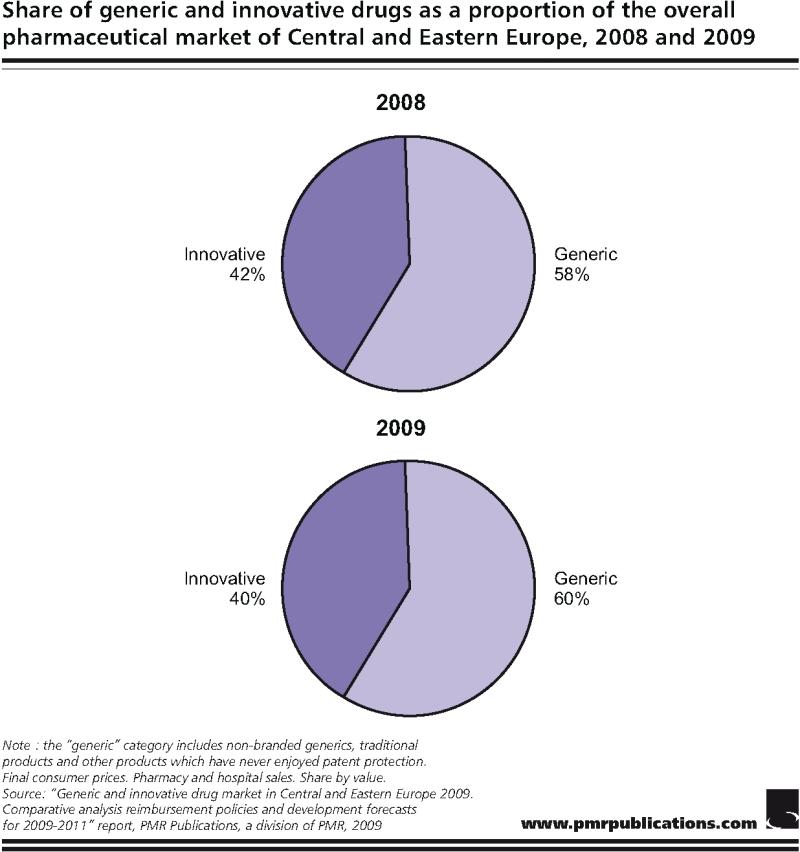 The pharmaceutical market in Central and Eastern Europe is dominated by generic drugs. This subdivision was worth €17.2bn in 2008 and is expected to develop by around 14% per annum between 2009 and 2011. The growth rate of the innovative drug market, which was worth €12.4bn in 2008, will be slower, according to the latest report from PMR, a research and consulting company, entitled “Generic and innovative drugs market in Central and Eastern Europe 2009. Comparative analysis, reimbursement policies and development forecasts for 2009-2011”. Generics to account for 60% of the market in 2009 According to PMR estimates, the generic drug market (including non-branded generics, traditional products and other products which have never enjoyed patent protection) in Central and Eastern Europe was worth €17.2bn in 2008, in contrast to a market value figure of €12.4bn for innovative drugs. Generic drugs therefore accounted for around 58% of the pharmaceutical market in the region in terms of value (taking into account both pharmacy and hospital sales). The CAGR for generics will reach as much as 14% between 2009 and 2011, whereas that of innovative drugs will be much lower. “As a result, the share of generic drugs will constantly increase and in 2009 generics will account for around 60% of the pharmaceutical market in Central and Eastern Europe”, according to Agnieszka Stawarska, Pharmaceutical Market Analyst at PMR and a co-author of the report. Although the innovative drug market in Central and Eastern Europe will develop at a slower rate than that of generic drugs between 2009 and 2011, the growth rate of original medicines for the whole region will be positive. It has, for the time being, been compromised by the cost-containment policies of the CEE countries, which have been stepped up during the global financial crisis. However, in the medium term PMR expects an improvement in health awareness and the modernisation of healthcare systems, including the development of private health insurance and the establishment of health insurance and drug reimbursement systems, similar to those in European countries, in Russia and Ukraine, to be drivers of the innovative drug market in the CEE countries. An additional driver will be the aging of the population in the region.Local companies are generic-oriented… There are few innovative pharmaceutical companies of local origin in Central and Eastern Europe. Most companies based in the region are generic drug manufacturers. “The largest players of this kind include Gedeon Richer, Krka, Egis and Zentiva. These companies have a presence in most CEE countries and they are well-established there” Monika Stefanczyk, Head Pharmaceutical Market Analyst at PMR and a co-author of the report, explains. For such companies, the region of Central and Eastern Europe is usually the main area of their activities. The second group of companies consists of global generic players. Their presence differs from one CEE country to the next. For example, Dr. Reddy’s, an Indian generic manufacturer, concentrates on Russia, which is one of the company’s key markets worldwide. Actavis, an Iceland-based manufacturer, is at its strongest in Bulgaria and Russia. Ranbaxy’s key markets in the region are Romania and the CIS countries (Russia and Ukraine in particular). Stada has a strong presence in Russia, particularly after the acquisition of two Russian companies (Nizhpharm and Makiz-Pharma); and at the beginning of 2009 the company entered Poland and Bulgaria by establishing subsidiaries there. A number of consolidation processes recently took place in the generic arena, which were of great importance for Central and Eastern Europe. For example, Teva gained a strong presence in the region through the acquisition of Barr in July 2008, which included one of the largest local generic drug producers − the Croatian company Pliva. In June 2008, Mylan, a US generic manufacturer, acquired the CEE generics businesses of Merck KGaA, the prominent German drug manufacturer. The deal includes Merck’s operations in Poland, Hungary, Slovakia, Slovenia and the Czech Republic. In March 2009 Zentiva, one of the leading generic players in the region, was bought by Sanofi-Aventis. In May 2009 Novartis acquired the generic cancer drug production division of the Austria-based EBEWE Pharma. …whereas innovation is the domain of global concerns The innovative drug market in the region is dominated by multinational pharmaceutical concerns. Such companies have representative offices in most of the Central and Eastern European countries, but, as they are active all over the world, the region is not, in most cases, their main market. However, innovative drug producers often choose Central and Eastern Europe as a place in which to locate clinical trials, because of the low costs, high population and limited access to innovative therapies in such countries. Today innovative companies face a crisis associated with the loss of patent rights pertaining to their most important products, which is expected to affect their sales performance in Central and Eastern Europe also, as many players of domestic origin may launch the generic equivalents of their drugs on the market.This press release is based on information contained in the latest PMR report entitled “Generic and innovative drugs market in Central and Eastern Europe 2009. Comparative analysis, reimbursement policies and development forecasts for 2009-2011”.PMR Publications (www.pmrpublications.com) is a division of PMR, a company providing market information, advice and services to international businesses interested in Central and Eastern European countries and other emerging markets. PMR key areas of operation include market research (through PMR Research), consultancy (through PMR Consulting) and business publications (through PMR Publications). With over 13 years of experience, highly skilled international staff and coverage of over 20 countries, PMR is one of the largest companies of its type in the region.PMR Publications ul. Supniewskiego 9 31-527 Krakow, Poland tel. +48 12 618 90 00, fax +48 12 618 90 08

01-28-2019 | Health & Medicine
MAXIMIZE MARKET RESEARCH PVT. LTD.
Synthetic Biology Market – Europe
Synthetic Biology Market Europe is expected to reach USD XX Billion by 2026 from USD XX Billion in 2016 at a CAGR of XX% (Detailed analysis of the market CAGR is provided in the report). Synthetic biology has expanded into various interdisciplinary fields that may be defined as the combination of artificial design and engineering to produce biological systems, chemicals or living organisms. Synthetic biology is also used for improving applications
08-08-2018 | Health & Medicine
Data Bridge Market Research
Europe Radiotherapy Market
The Europe Radiotherapy Market research report consists of a primary and secondary research along with an in-depth analysis of the quantitative and qualitative aspects by the expert industry analysts and professionals, leading management bodies, to gain a profound insight of the industry as well as the industry performance. The Europe Radiotherapy Market report presents a lucid picture of the current industry landscape, including the historical and projected market size, based
05-12-2016 | Associations & Organizations
Europe Business Assembly
Europe Business Assembly
The Europe Business Assembly (EBA) is an international corporation for the evolution and implementation of economic and social development. The company was established in April 2000 and its history shows a plethora of promising initiatives, creative growth and professional victories. EBA’s activity demonstrates the capabilities and power of professional partnership. The year 2000 saw the beginning and the foundation of EBA with the signing of the memorandum of cooperation and
10-01-2008 | IT, New Media & Software
TEAM International
Smartsourcing in Eastern Europe
In 2008 the outsourcing business of Eastern Europe was estimated at nearly $2 billion, representing just a tiny fraction of the global IT outsourcing market, estimated at about $386 billion. According to the Gartner Dataquest predictions, in the next four years Eastern Europe is expected to outstrip the rest of the offshore market concentrated mainly in the “classical” locations like India. By 2010 Eastern Europe’s IT outsourcing market share is
03-03-2008 | Energy & Environment
Zensys Inc.
Home Control conquers Europe
European Home Control Summit attracts participation from leading International companies and organizations 29. February 2008 - Copenhagen/Frankfurt - The first European Wireless Home Control Summit on 9 April 2008, taking place parallel to Light + Building, features leading companies such as Merten, Horstmann, Danfoss, and market researcher Parks Associates as well as publicly funded organizations like the Danish Energy Saving Trust (DEST) presenting the newest trends, products and market strategies pertaining
03-19-2007 | Business, Economy, Finances, B …
Michael Richter - International marketing and sales consultant
Marketing in/to Europe
Internationalization is important for every company. Europe - with its now nearly 500 million inhabitants, however, only looking towards the European Union's countries - is a perfect place for companies to go. Especially the Western countries are highly industrialized. Find some reasons and help in this article. Most of the European companies - actually more than 90 % / country on an average - are fighting the more or less stagnating
Comments about openPR
Your portal is fast, simple, and easy to use. Others may have more functions but they also demand more editing time, you have to preformat the text in order to achieve a good result etc. I think openPR is really fantastic!
Andreas Knepper, wallmedien AG