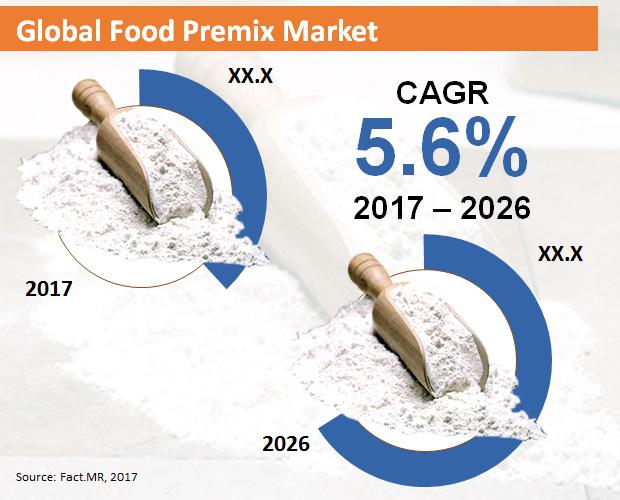 Recently, a novel report developed using proven research methodologies at the headquarters of Fact. MR has identified various prominent factors and trends prompting market growth ofFood Premix Market. The study is titled as “Food Premix Market Forecast, Trend Analysis & Competition Tracking: Global Review 2017 to 2022”, which deeply analyses the global market trends, with historical data from 2016 and 2017, and projections of compound annual growth rates (CAGRs) during the mentioned forecast of 2017-2026. For the benefit of the readers, the report concludes with a special focus on the detailed profiles of the major vendors in the GlobalFood Premix Market.Request For Sample Report @ https://www.factmr.com/connectus/sample?flag=S&rep_id=615Mounting instances of appetite loss among the aging population has led them to spend more on fortified and functional food. Growing requirement for nutrition-rich food among health conscious consumers have led manufacturers to incorporate health benefiting ingredients such as vitamin premixes. Food manufacturers are utilizing various ingredients to enhance the appeal, flavor, and functionality of food products.In 2017 Food Ingredients Europe, SternVitamin illustrated the opportunity for food, beverage, and food supplement manufacturers in generating new value-adding potential through special product concepts. An example of SternVitamin’s wide array of products is new premix dedicated to “healthy bones & a healthy heart”. This micronutrient mix complies with one of the major current beverage trends, i.e. water-based fortified products, as growth potential in drinks segment is highest across the globe. SternVitamin has proved how EU-authorized health claims can be effectively leveraged for marketing of finished drinks’ retail packs.Food premixes are witnessing a gradual surge in popularity worldwide, and according to a recent Fact.MR report, the global market for food premix will register a steady 5.6% value CAGR during the period of forecast 2017 to 2026. Nearly 735,000 tons of food premix is estimated to sold globally by 2026-end.Food added with Powdered Vitamins & Minerals to Reduce Anemia & Iron Deficiency in ChildrenA large number of pre-school and school-going children between the age group 2 and 12 years old are affected with anemia, with a majority among them suffering from iron deficiency. Point-of-use food fortification with micronutrient powders has been recommended for trimming the prevalence of pediatric anemia. In order to assess its effectiveness, researchers as Micronutrient initiative in Canada, WHO, and Centers for Disease Control and Prevention (CDC) in the U.S., have conducted a review of quasi-RCT and RCT trials.According to the research, point-of-use food fortification with micronutrient powders that comprise iron has the potential to alleviate iron deficiency and anemia in children. Focus of future research regarding the same is being directed toward increasing the evidence on adverse effects, developmental outcomes, morbidity, and mortality. Developments such as this are likely to significantly influence growth of the global food premix market in the upcoming years.Rising Demand for Food Fortification to Impact Growth of Food Premix MarketDemand for food fortification is on a significant rise, driven high prevalence rate of the micronutrient deficiency diseases among the population worldwide, which in turn has propelled the cases of malnutrition. Food products such as sugar, flour, maize, vegetable oils, and wheat are generally fortified with minerals and vitamins for ensuring better health, which in turn has been driving demand for food premix over the past few years.Consumption of nutrient premix, such as amino acid-based infant formula, is also showcasing a surge, driven by growing preference of consumers for nutritional fortification of baby food products and infant formula. In addition, Ingredients such as arachidonic acid (ARA) and docosahexaenoic acid (DHA) are also being added to food premix along with vitamins and iron, which in turn has proliferated adoption of food premixes.View Report @https://www.factmr.com/report/615/food-premix-marketMarket Players adopting Expansion Strategies to Increase their Market FootprintLeading players in the market are adopting key strategies such as acquisitions, mergers and new product launches, in a bid to boost their sales and increase their market footprint. In mid-2017, Prinova, a U.S. food ingredients supplier, acquired the premix operations of Lycored based at the U.K. and China. The acquisition has enhanced the premix supply capacity of Prinova over 2x times, meanwhile providing the company with a global footprint. According to Prinova’s president, Don Thorp, the acquisition will benefit their company’s already made investment in dry and liquid nutrient & flavor premix blend operations based at North America.Montreal-based Lallemand, in the previous year, launched a new range of vitamin D premixes, called Instaferm VitaD premixes, blends of dried VitaD yeast and wheat flour for use in fine bakery products, rolls, and bread. This premix range, vitamin D2 baker’s yeast, has been approved by the U.S. FDA for use in yeast-leavened baked snacks and baking mixes, 400 International Units (I.U.s) being the maximum level.Fact.MR’s report has identified key players supporting expansion of the global food premix market, which include Glanbia plc, Koninklijke DSM N.V., BASF SE, Fenchem Biotek Ltd., Lycored Ltd., and Prinova Group LLC.Check Discount @ https://www.factmr.com/connectus/sample?flag=D&rep_id=615About Fact.MRFact.MR is a fast-growing market research firm that offers the most comprehensive suite of syndicated and customized Food & Beverages MarketResearch Reports. We believe transformative intelligence can educate and inspire businesses to make smarter decisions. We know the limitations of the one-size-fits-all approach; that's why we publish multi-industry global, regional, and country-specific research reports.Contact Us Fact.MR 11140 Rockville Pike Suite 400 Rockville, MD 20852 United States Email: sales@factmr.com Web: https://www.factmr.com/ Follow us on LinkedIn: https://www.linkedin.com/company/factmr/

You can edit or delete your press release Overview of Food Premix Market: Size, Trends, Share and Growth Forecast till 2026 here

09-03-2018 | Tourism, Cars, Traffic
Foodhoopingeurope
Wonderful Barcelona food tour
Barcelona food tour at its best Enjoy a great city with even greater meals. The Catalan kitchen has many surprises and offers different variations of classic Spanish meals. Fresh fish from the sea combined with selected ingredients and spices create special meals with a remarkable taste. Guests enjoy the menu’s in a very special environment in the young and beautiful city Barcelona. Enjoy your meals and a great stay with Foodhopping
10-10-2017 | Business, Economy, Finances, B …
QY Research Groups
Rigid Food Containers
The Global Rigid Food Containers Market Research Report 2017 renders deep perception of the key regional market status of the Rigid Food Containers Industry on a Global level that primarily aims the core regions which comprises of continents like Europe, North America, and Asia and the key countries such as United States, Germany, China and Japan. Request for sample of Rigid Food Containers Market research report @ https://www.qyresearchgroups.com/request-sample/548017 The report on “Global
12-07-2016 | Business, Economy, Finances, B …
ReportBazzar
Packaged Food in Argentina
Summary The economic crisis seriously impacted the demand for packaged food, leading to a slight decrease in retail volume sales in 2016. To soften the fall in sales, the main chained supermarkets and hypermarkets, such as Jumbo, Coto and Carrefour, offered significant discounts. These retailers offered deals like 2-for-1, or an 80% discount on a second product, as well as major savings when paying with a bank card. These promotions even
12-07-2016 | Business, Economy, Finances, B …
ReportBazzar
Packaged Food in Germany
Summary Retail value sales of packaged food continued to grow in Germany in 2016, as was the case in all years of the review period from 2011 to 2016. The last time a decline took place was in the context of the global economic and financial crisis and the following recession in 2010. In the context of the review period as a whole, the 2016 development was slightly below average, although
12-07-2016 | Industry, Real Estate & Constr …
ReportBazzar
Packaged Food in France
Summary The slow but progressive exit from the persisting crisis of the French economy and the slight improvement in GDP growth in 2016 has contributed to current value growth of 1% in current value terms in packaged food. This is still modest and just in line with the CAGR seen over the review period, although this is in the context of strong price wars, stagflation and the detrimental effects of terrorist
10-04-2016 | Leisure, Entertainment, Miscel …
www.hotelmarineplaza.com
Navratra Special! Sattvik Food!
Treat your taste buds this Navratri with mouthwatering vrat ka khanna at Bayview Restaurant, Hotel Marine Plaza from 1st October till 10th October 2016. The newly designed menu is an Ala Carte available for Lunch and Dinner at Bayview. Executive Chef Kshitiz Shekhar have crafted these dishes keeping in mind the ingredients & flavors that are in harmony with the fasting beliefs. The meal is in accordance with the navratra rules
Comments about openPR
I can't but agree to the positive statements about your portal: easy to use, clear layout, very good search function, and quick editing!
Jens O'Brien, Borgmeier Media Communication