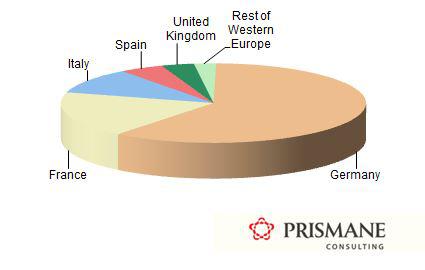 About Polyacrylate Rubber (ACM) ACM is used in automotive applications such as hoses, seals, gaskets, dampers and constant velocity joints (CVJ). Other applications include electrical transmission seals, industrial hoses and adhesives. ACM is cost competitive rubber with slightly lower performance than its immediate competitor AEM (Ethylene Acrylate Elastomer). Hence, it can be used where the performance can be compromised to achieve better economy. Other high-end competitors include flouroelastomers (FKM and FFKM) and Silicone rubber (VMQ). New grade of ACM such as Noxtite HT-ACM by Unimatec Chemicals is more competitive where high temperature performance is required such as turbo-engine hoses. The use of AEM in turbo-engine hoses is driving its demand. Similarly, OEM manufacturers are adopting ACM or mixtures of ACM & AEM for automotive hoses. This generally drives the ACM demand worldwide in turbocharged engines. Currently around 70% of global turbocharged engines are being produced in Europe followed by Asia Pacific accounting for almost 30%, dominated by Japanese turbo-engine manufacturers. The major potential lies in Asia where China has not fully adopted turbocharged engines due to subsidised gasoline prices and continuously changing environmental regulations. The local ACM producers in China have technological challenges to overcome for a better and sustainable product which can compete with world class ACM manufacturers such as Zeon Corporation and Unimatec Chemicals. Western Europe ACM Demand AnalysisWestern Europe is one of the largest consumers of engineering thermoplastics. Germany is the largest producer and consumer of plastics with well-established automotive industry. In terms of ACM consumption, the region ranks second after Asia-Pacific with a demand of around 9 kilotons and automotive is single biggest end-user industry. Brexit is likely to have an impact on the automotive sector as well as OEM’s in Europe as it will impact tariffs, currency and labor cost. UK has strong growth in terms of automotive manufacturing since past few years but it is likely to be affected by country’s departure from the EU. UK exports around 70% of its car production volume, out of which around 60% is exported to EU countries. Germany and UK witnessed a slight decline in their automotive production in 2017 mainly because of the peak achieved in 2016 and on account of political uncertainties. Despite these factors, the growth for ACM rubber is projected at steady rate of 3.5% during the forecast period 2018-2025.For a detailed supply-demand analysis report contact Prismane Consulting at sales@prismaneconsulting.comPrismane Consulting is a unique global boutique consulting firm with an Indian origin. We present ourselves to the world outside providing management, economic and technical expertise to improve customer engagement, boost operational efficiency, reduce costs and achieve superior business results. Prismane Consulting serves leading businesses in the field of Chemicals, Petrochemicals, Polymers, Materials, Environment and Energy. We have been advising clients on their key strategic issues solving their toughest and most critical business problems.Prismane Consulting Office #519, Amanora Chambers, Amanora Park Town, Hadapsar-Magarpatta Road, Pune 411028 India

You can edit or delete your press release Turbo Charged Engines to drive ACM demand? here

09-10-2019 | Business, Economy, Finances, B …
Prismane Consulting
Global Butadiene Market Overview
Global butadiene demand was estimated to be around 12296 kilo tons in 2018. The global butadiene market has grown at an average of 3.2% from 2014 to 2018 mainly due to strong demand from butadiene derivatives like Styrene Butadiene Rubber (SBR), Polybutadiene Rubber (PBR), Acrylonitrile Butadiene Styrene (ABS) and others in the Asia-Pacific region. The global butadiene market was impacted by the economic meltdown in 2008-2009. The demand declined during
06-18-2018 | Advertising, Media Consulting, …
Prismane Consulting
Thermoplastic Copolyester (TPC) Elastomers Market Research Report, 2005-2025
Thermoplastic Elastomers (TPE) are versatile class of plastics exhibiting properties of both plastic and rubber. With its exceptional physical, mechanical and dynamic properties Thermoplastic Copolyesters (TPCs) have increasingly solidified their place as substitutes for metals and rubbers in many high strength applications. TPCs possess thermoplastic behavior with structural strength showing high resistance to impact and flex fatigue. These properties make thermoplastic copolyester elastomers suitable for various precision applications. It is
06-13-2018 | Advertising, Media Consulting, …
Prismane Consulting
Fluorocarbon elastomers (FKM) over capacity and low operating rates in China
The global demand for fluoroelastomers was estimated to be around 26 kilo tons in 2017, growing between 3-4% since 2010. Fluorocarbon Elastomer (FKM) is the dominant fluoroelastomer accounting for more than 85% of the global fluoroelastomer consumption and it still remains a single largest driver for growth. Other fluoroelastomers include fluorosilicone and perfluoroelastomers. Asia Pacific is the biggest consumer followed by North America and Western Europe. Historically, FKM has been
04-23-2018 | Advertising, Media Consulting, …
Prismane Consulting
Global Olefinic Block Copolymers (OBCs) Market Research Report, 2014-2025
Olefin Block Copolymers (OBCs) were developed back in 2006. INFUSE OBCs were brought into commercial production in 2008. OBCs are composed of alternating hard and soft segments arranged in a linear fashion that provide them with elastomeric properties. This composition and property is generic to elastomers. The hard segment can be crystalline or semi crystalline in nature and is composed of either polyethylene or polypropylene. The soft segments which