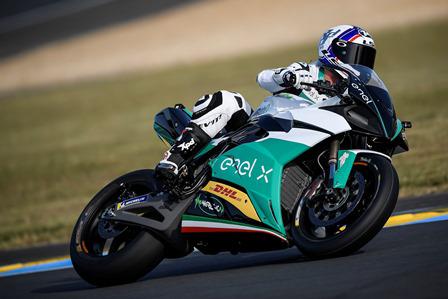 During the French MotoGP the updated version of the MotoE all-electric superbike prototype by Energica made its first public appearance on track. New solutions have been designed and developed with the technological support of CRP Meccanica and CRP Technology. Max Biaggi will be riding next demo lap at Mugello MotoGP™.The partnership between CRP Group’s specialized companies and Energica Motor Company to fine-tune the all-electric superbike for the 2019 FIM Enel MotoE ™ World Cup goes full steam ahead: an updated version of the MotoE prototype made its first public appearance on-track for testing during the French MotoGP™.The test was carried out by both Loris Capirossi and the Energica official test rider Alessandro Brannetti. “We are happy about the test performed at Le Mans with the new prototype”, said Brannetti. “Energica with CRP’s support is definitely heading in the right direction and I’m excited to see what’s in store next.”All the solutions have been developed with the support of CRP Group’s know-how. CRP will keep going on collaborating closely with Energica, to achieve optimal results in a very short time. CRP Technology (the CRP Group’s specialized company in the field of laser sintering and Windform® composite materials) is manufacturing aerodynamic parts in professional 3D printing with Windform® materials. CRP Meccanica (since over 45 years alongside F1 teams as strategic partner for the production of hi-tech mechanical components) is working on the development of the braking and suspension system. The know-how of the two companies are supporting the study and development of the new battery. All these elements have improved the general performance of the superbike, bringing it closer to the preset targets.The next stop on the road to the 2019 FIM Enel MotoE™ World Cup will be at CRP and Energica’s home GP in Mugello, with a very special rider for the demo lap: the four-time World Champion Max Biaggi.The Le Mans circuit has shown other surprises: The Energica Ego Corsa all-electric superbike was taken for a demo lap by former MotoGP rider and 250cc race winner, championship contender and multiple podium finisher Randy de Puniet, who made the most of what was a glorious late-spring Sunday to ride the Ego Corsa in front of a sea of fellow French fans. After the end of the lap, Randy took some time to comment on the experience: “The connection with the throttle and the power delivery are very smooth”, he said. “The bike reaches high speed in a very short amount of time, and that’s a good thing. Another good point of the bike is that the rear is very stable when opening the throttle. It’s a very easy bike to get to grips with, so it would be fun to be racing the Energica Ego Corsa against twenty or more riders on identical machinery. I am really pleased with this experience and grateful for the opportunity; I hope my feedback will help Energica continue in the right direction.”CRP Group is headquartered in Modena, Italy. The Group is made up of specialized companies (CRP Technology, CRP Service, CRP Meccanica, plus its US-based partner CRP USA) dedicated to providing clients with the very latest technological solutions. With more than 45 years of experience in the world of F1 and more than 20 years of experience in Additive Manufacturing, CRP Group is distinguished by its know-how in specific application fields including but not limited to: automotive and motorsports, design, aerospace, UAVs, marine, entertainment, defense, and packaging.Veronica Negrelli CRP Group Press Officer via Cesare Della Chiesa 150/C 41126 Modena Italy

01-04-2019 | Energy & Environment
CRP Group
CRP at MIA EEMS 2019
CRP will be attending the 2019 MIA EEMS Energy-Efficient Motorsport Conference (9 January, NEC Birmingham, UK) by showcasing the latest end use parts manufactured by cutting-edge Additive and Subtractive Manufacturing technologies for the most demanding sectors The MIA Entertainment and Energy-Efficient Motorsport Conference (EEMS) in association with AVL RACING at Autosport International, will be held at NEC (Concourse Suites 1 & 2, B40 1NT) Birmingham, UK on the 9th of January
08-01-2018 | Science & Education
CRP Group
CRP USA at 2018 SmallSat Conference
For the fourth year in a row CRP USA (www.crp-usa.net) will be attending the Small Satellite Conference and Exhibit at Utah State University, Logan, Utah, from August 4th to August 9th. The event will be held at the Taggart Student Center, and CRP USA will be exhibiting at booth 43T. They will be displaying cutting edge solutions for the space industry (http://www.crp-usa.net/aerospace-case-studies/) manufactured in the Windform family of high performance materials
07-12-2018 | Sports
CRP Group
Updated 3D printed fairing for Ego Corsa
At the last series of tests carried on at the TT Circuit Assen, the 2019 Ego Corsa prototype was on track with a new 3D printed fairing with improved aerodynamics. The 3D printed fairing was manufactured by CRP Technology via Laser Sintering using Windform XT 2.0 Carbon-fiber reinforced composite material. “We have had the fairing available in short time” the Energica technical staff states. Thanks to the professional 3D printing and
07-05-2018 | Sports
CRP Group
Red Dot 2018: CRP Technology’s know-how helped to win Design Award!
Tundra®, Hexadrone’s first fully modular and easy-to-use drone for industrial and multi-purpose tasks, has won the Red Dot Award 2018 in the drone category. The evaluation process (static test and assess) has been performed on the 3D printed Tundra® prototype manufactured by CRP Technology via Laser Sintering technology using Windform SP and Windform XT 2.0 Carbon-composite materials. The award ceremony will be taking place in the Aalto-Theater, Essen (Germany) on