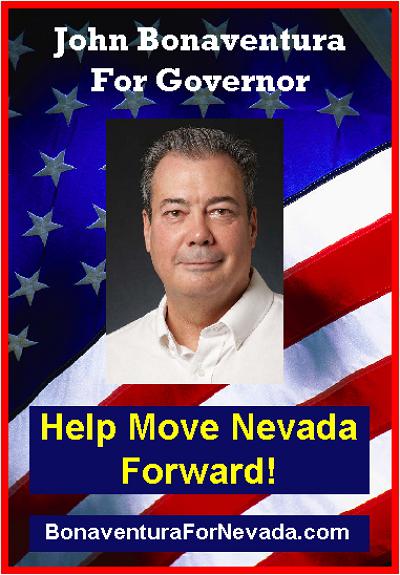 Nevada Governor democratic candidate, John Bonaventura, releases platform policies including gun owner rights, marijuana offender pardons and Nevada prison, criminal law and criminal justice reform issues.Las Vegas, Nevada – In Nevada prison reform news, Governor candidate, John Bonaventura outlines his campaign policies and platform issues including regarding criminal justice reform and prisoner rights on his official website. The John Bonaventura for Nevada Governor information and fund raising site can be seen at:http://www.BonaventuraForNevada.comVowing to protect the constitutional rights of all Nevada citizens and make sure others follow both the US and State Constitution, Nevada Governor candidate, John Bonaventura, campaign addresses multiple issues including criminal justice reform and prisoner rights. This includes addressing how to stop filling up jails and prisons with people that don't belong there, how the system steals from people, starves them and makes them pay exorbitant rates for phone calls and food. In addition the issues that arise from private companies running prisons making money from incarcerating people and creating a need to unjustly fill prisons to remain profitable. Mr. Bonaventura aims to create laws and policies to stop enslaving the American people for profit, release people on a case by case basis and redo our current justice system to provide equal access to justice for all Nevada citizens.Marijuana Offender Pardons - The candidate will also pardon non-violent marijuana offenders that are still in prison under old laws to get them back to their families and reduce prison overcrowding and operation costs. Gun Ownership Rights - Mr. Bonaventura aims to protect the Second Amendment from abridgment. The Nevada Firearms Coalition Political Action Committee has given John Bonaventura an “A” rating. The John Bonaventura for Nevada Governor campaign also focuses Tax Reform to help Nevadans keep their hard earned money and foster a good economy. Stopping the corruption of Nevada elected special interest officials, in particular County Commissioners who circumvent the voters and violate our constitution and their oath of office are also addressed. Mr. Bonaventura has had direct exposure to the negative effects of allegedly corrupt County Commissioners who are accused of circumventing the voters and violating the Constitution. As Nevada Governor, John Bonaventura pledges to protect Nevada citizens by holding our elected officials accountable for violations of the Nevada Constitution and their oaths of office.Family court and family law reform are also part of the issues addressed by the campaign. As a 70 billion dollar ($70,000,000,000) a year industry, more money goes through family court than all the courts combined. The current family court system represents an adversarial process in which two parents/former spouses fight for their own children and assets. Many family court judges are not following the law, nor are they following the constitution.Other platform issues can be seen on the Bonaventura for Nevada website. In addition, The Las Vegas Review Journal has posted a information page at:https://www.reviewjournal.com/voter-guide-2018/#/candidate/john-bonaventura--438About John Bonaventura for Nevada Governor The most conservative Democratic candidate in the governor’s race, John Bonaventura has lived in Nevada almost his whole life and most of his family was born in Nevada. He went to Las Vegas Western High School and attended the Community College of Southern Nevada. John earned a Bachelor’s degree from UNLV.Mr. Bonaventura was elected to the Nevada Assembly in the early 1990’s. He also was elected and served as Constable of Las Vegas. John stands for upholding the constitution and the protection of Nevada and US citizen’s constitutional rights. John pledges to serve the people and not the demands of self interest groups. He will work to unite the party and Nevada, fighting to keep Nevada moving in the right direction. For more information contact:Bonaventura For Nevada Govenor John Bonaventura 5604 Eugene Ave, Las Vegas, Nevada 89108 USAFacebook: https://www.facebook.com/John-Bonaventura-2007714286149542Phone: 702-250-9532e-mail: johnbona@cox.netVisit: http://www.BonaventuraForNevada.com

11-11-2020 | Arts & Culture
Coem Records
Spanish singer Kevin Coem releases new single "Nevada"
Madrid. Spanish singer-songwriter Kevin Coem first announced the release of his new single, called "Nevada", through social media back in October, aiming for November 11 as the release date. This song went on to become his 6th single since his debut in 2016, and it hits the stores about 4 months after revealing "Sinner", an album focused on the Seven Deadly Sins which was released in July. After a Japanese-language debut
07-20-2020 | Business, Economy, Finances, B …
PromoDirect
Michael Sarro Wins the Nevada State Amateur Championship
19-year-old golf star Michael Sarro wins the Nevada State Amateur Championship Trophy on Sunday at the Reflection Bay Golf Club at Lake Las Vegas. Las Vegas, July 12, 2020 A big achievement by Michael Sarro who won the Nevada State Amateur Championship on Sunday. If there were any doubts about his talents and skills, they have been put to rest. Sarro coasted to a 3 shot victory at Reflection Bay Golf
10-10-2016 | IT, New Media & Software
Chetu Inc
CHETU TO EXHIBIT AT LAVACON CONFERENCE IN LAS VEGAS, NEVADA
Plantation, Fla (September 26, 2016) -- Chetu is pleased to announce that they will be attending the 2016 LavaCon conference in Las Vegas, NV. The event takes place on October 25th through the 28th at the Golden Nugget Hotel, located at 129 Fremont Street Experience. LavaCon is a gathering place for content strategists, documentation managers, and other content professionals willing to share their best practices. The conference will include over 80
05-20-2010 | Science & Education
Spread the Word Nevada, Inc.
Inaugural Suitcase Party Benefits Spread the Word Nevada Literacy Programs
Las Vegas, NV (May 18, 2010) – More than 200 guests turned out for the First Annual Suitcase Party, which benefited Spread the Word Nevada’s children’s literacy programs, a non-profit organization based in Henderson, which serves underprivileged children through out Southern Nevada. Proceeds raised will be used to continue literacy services in the twenty elementary schools within the Clark County School District, which have been adopted by the organization. Once
01-19-2010 | Health & Medicine
MessageBroadcast
MessageBroadcast launches automated Medicare survey system for NebDoctors of Nev …
MessageBroadcast launches automated Medicare survey system for NebDoctors of Nevada. MessageBroadcast announced today that NebDoctors of Nevada, provider of Nebulizers (pediatric respiratory products), has chosen MessageBroadcast’s automated survey solution to satisfy Medicare accreditation and compliance requirements. The Centers for Medicare and Medicaid Services (CMS) recently issued new quality standards to prevent fraud and promote quality care for Medicare recipients. The new Federal law that went into effect on October
09-12-2008 | Science & Education
Interactive Technologies of Nevada
Nevada State College to Pilot Succeed in: Math! Software
Interactive Technologies of Nevada (ITN), developer of Succeed in: Math! software, has agreed to pilot its math software at Nevada State College for students taking remedial math courses. “We are very proud that Nevada State College has agreed to pilot our program”, said Joel Rector, Operations Director for ITN. “We believe that many students taking remedial math classes will find our software helpful for improving their math skills in order to
Comments about openPR
OpenPR is clearly structured and remains true to its principle of confining itself to the essential parts. OpenPR has proven to be a very good and reliable partner to our media agency: Within the shortest time the releases are online and go down well with the media representatives. The success of OpenPR is reflected in the steadily increasing number of press releases. It is good that OpenPR exists!
Ursula Koslik, Director Marketing & PR, F+W Hamburg