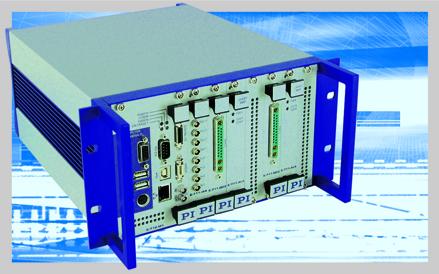 The use of real-time operating systems on the host PC allows it to communicate with other system components, e.g. a vision system, without time delays with discrete temporal behavior and high system clock rate. Physik Instrumente (PI), the leading manufacturer of piezoceramic drives and positioning systems, offers a real-time module as an upgrade option for the host PC and also the connection of the GCS (PI General Command Set) software drivers. The module is based on Knoppix-Linux in conjunction with a pre-configured Linux real-time extension (RTAI). - A library which is 100% compatible with all other PI GCS libraries is used for the communication with the real-time system. All PI GCS host software available for Linux can be run on this system. - The real-time system running in the real-time kernel can be used to integrate PI interfaces and additional data acquisition boards for control. Open functions to enable you to implement your own control algorithms are provided. Data, such as positions and voltages, is recorded in real time, and pre-defined tables, with positions, for example, are output in real time to the PI interface and to additional data acquisition boards. - You can program your own real-time functions in C/C++, MATLAB/SIMULINK and SCILAB. - The system includes a PI GCS server, which allows the system to be operated as a blackbox using TCP/IP, via a Windows computer, for example. - The system can be installed on a PC or booted directly as a live version from the data carrier. - A free demo version with restricted functionality is available.Well-known for its high quality, PI has been one of the leading players in the global market for precision positioning technology for many years. PI has been developing and manufacturing standard and OEM products with piezo or motor drives for 40 years now. In addition to its three German factories, PI has eight subsidiaries and a total of over 500 employees worldwide.Physik Instrumente (PI) GmbH & Co. KG Auf der Roemerstrasse 1 76228 Karlsruhe Germany www.pi.ws info@pi.ws