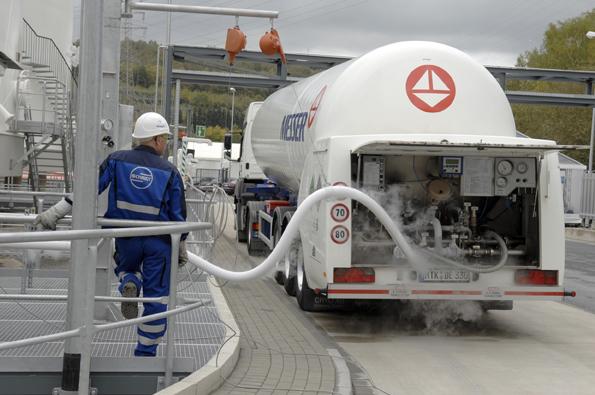 The industrial gas specialists at Messer invest over 160 million euro in the expansion of production capacity “With our investments in Germany, Switzerland, France, Belgium, Italy and Spain, we are sending a clear signal that we believe in the economic potential of Western Europe”, says Stefan Messer, proprietor and management board chairman of the industrial gas company which shares his name. The company is spending a total of more than 160 million euro on the expansion of its gas production in Western Europe. In total, this privately-run producer of oxygen, nitrogen, argon and carbon dioxide is investing 700 million euro to ensure the continued reliable and independent supply of product to its European and Asian customers.A sure-footed step back into the German home market Just this September, Messer began operation of a new air separation unit on the grounds of the Deutsche Edelstahlwerke in Siegen. A second unit will expand the delivery radius for transport-sensitive gases to the northern and eastern sections of Germany. Messer is constructing a production facility on the grounds of Salzgitter Flachstahl GmbH which will begin producing gases for the region in late summer 2010. Messer is investing over 80 million euro in Germany alone.The first production facility in Switzerland also delivers to Italy The first production facility for air gases in Switzerland was opened according to plan in July 2009. Messer has invested around 20 million euro in this facility, which is located on the grounds of Lonza AG, in order to produce industrial gases and medical oxygen. Lonza is a worldwide leading producer of chemical and biotech agents and products for the life sciences industry. The company has been contracted by Messer to oversee the operation of the air separation unit. A portion of the gases will be liquefied and transported to neighbouring Italy by rail for delivery to Messer Group customers in the northern part of the country.Spain: Expansion to the south On October 30th, 2009, Messer will open a new bottling facility for technical gases in San Isidro in the province of Alicante. The industrial gas specialists at Messer have been active in Spain for almost 40 years, and this 2 million euro investment is intended to meet rising demand for bottled gases in production facilities along the eastern coast, in Andalusia and in the country’s interior. Like the facility operated by Messer in Tarragona, Catalonia, this bottling facility utilizes advanced 300 bar technology. This high filling pressure allows for a 50 percent higher filling capacity for gas cylinders with no change in cylinder size. Because of this, it is possible to realize significant savings in transport, storage and handling of the cylinders. The Messer subsidiary in Spain is headquartered at the Tarragona industrial complex, where it operates two air separation units with a dedicated 90 km pipeline network supplying the chief chemical and petrochemical companies in the area. The second production facility for air gases was put into operation by Messer in Catalonia this year. Nitrogen, oxygen and argon gases which are among others bottled in San Isidro are produced in Tarragona, delivered by tanker truck and stored in gas tanks in liquid form to be subsequently vaporized for bottling in a gaseous state.Largest producer of carbon dioxide in Belgium In Zwijndrecht near Antwerp, Messer is constructing at the British company Ineos Oxide a new liquefaction facility with a production capacity of 150,000 tons of carbon dioxide per year. For this purpose Messer has formed a joint venture, in which it holds a 70 percent share, named bECO2 together with the Belgian company IJsfabriek Strombeek. Messer is investing 15 million euro in the facility, which will begin operation in the first quarter of 2010. Messer will use two-thirds of the total capacity of this facility to supply carbonic acid, dry ice and carbon dioxide in gaseous and liquid form to customers in industries such as foodstuffs, beverages, manufacturing and water. Ijsfabriek Strombeek will make use of the remaining 30 percent capacity. Messer France also operates a similar facility on the grounds of Ineos Oxide in Lavéra, France. Messer is already the leading supplier in the rapidly growing Belgian carbon dioxide market, and the third largest supplier in the Benelux countries. A bottling facility has been constructed in Antwerp for technical gases. By the end of 2010, all employees at the current headquarters of the Belgian subsidiary in Machelen will be transferred to Antwerp.France – Quality and purity for the foodstuffs industry In the French city of Saint Herblain near Nantes in Brittany, Linde and Messer have together invested more than 23 million euro in an air separation unit, which will officially begin operation in December. One key area of use for the air separation unit will be the extraction of high-purity oxygen for laser applications, in addition to nitrogen, which satisfies all quality and legal requirements for use in the foodstuffs industry. Many of the production facilities located in the west of France will profit from this air gas production source, which will represent a significant contribution towards the reliable supply of industrial gases in the region.Messer is one of the leading industrial gas companies, and is active in over 30 countries in Europe and Asia, as well as Peru, with over 60 operating companies. Its international activities are managed from Frankfurt am Main, whilst management of core technical functions – logistics, engineering, production and applications engineering – is undertaken from Krefeld. In 2008, about 4,700 employees generated consolidated sales of €795 million. From acetylene to xenon, the Messer Group has one of the most diverse product portfolios on the market – it produces industrial gases such as oxygen, nitrogen, argon, carbon dioxide, hydrogen, helium, shielding gases for welding, specialty gases, medical gases and many different gas mixtures. The Messer Group has state-of-the-art research and competence centers in which it develops applied technologies for the use of gases in almost every sector of industry, in food technology and environmental technology, medicine as well as research and science.Messer Group GmbH Vice President Corporate Communications Diana Buss Gahlingspfad 31 47803 KrefeldPhone: +49 (0) 2151 7811-251 Fax: +49 (0) 2151 7811-598 Email: diana.buss@messergroup.com www.messergroup.com