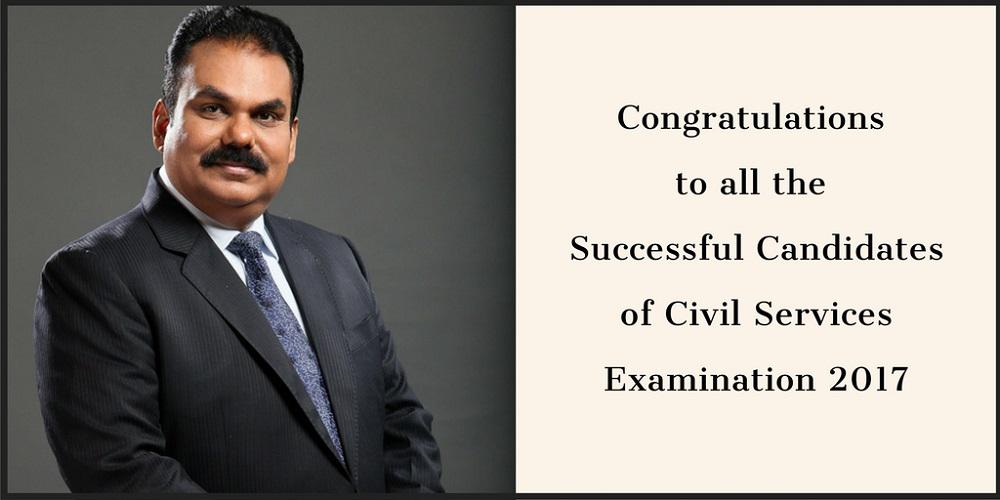 Union Public Service Commission has declared the final result of Civil Services Examination 2017 on 27th April 2018. About 10 Lakh students applied to appear in the first stage, i.e., Prelims Examination, but approx. 4.5 lakh students actually appeared for the Preliminary exam, and only 13000 were declared qualified for the Mains Examination, which held in October 2017. About 2300 candidates were declared qualified for the personality test. And finally, 990 students made their name to the final list and got the services like IAS, IPS, IFS and other Services. On a quick estimate, Out of these total 990 candidates, 355 plus candidates spread across different cities in India are the students of one of the most reputed coaching institutes, Chanakya IAS Academy. It was a day of jubilation for Chanakya IAS Academy, as students coached and mentored by Chanakya IAS Academy emerged at the top once again in Civil Services results. 5 students coached under the guidance of Chanakya IAS Academy, named, Atul Prakash with All India Rank 4, Koya Sree Harsha with Rank 6, Ayush Sinha with Rank 7, Anubhav Singh with Rank 8 and Saumya Sharma with rank 9 have made their place in top 10. With such prized performance of the students mentored & coached at various centers throughout the country, Civil Services Exam 2017 results have, yet again, brought laurels to the most trusted Academy in India.Mr. AK Mishra, Founder & Chairman, Chanakya IAS Academy, sees the results as an emphatic validation of Chanakya IAS Academy’s way of teaching that has helped an uncountable number of students realize their dream to make it to the Civil Services.“In case of competitive examinations like Civil Services, excellence is the gradual result of always striving to do better and our students so well prove this with the results every year. It is a great achievement for us and a matter of immense pride that our students have crafted yet another success story for Chanakya IAS Academy. At Chanakya IAS Academy, our attempt is to revolutionize the way students approach learning and make a difference in the way they think and understand”, said Mr. AK Mishra, Founder & Chairman, Chanakya IAS Academy. He also added, ‘while there are students with great potential in the country, many are not able to take their talents to fruition due to financial difficulties. At Chanakya IAS Academy, we also make efforts to identify such talent and make sure that the financial constraints do not pose obstacles to their development.’ With a consistent high success rate, India’s premier institute for Civil Services Chanakya IAS Academy has stamped its track record of unparalleled results.Chanakya IAS Academy was founded in 1993 by Mr. AK Mishra, Founder and Managing Director, Chanakya IAS Academy. With over 25 years of excellence, the academy has given more than 4000 Civil Servants to the nation. Headquartered in New Delhi, the academy has pan India presence and operate in 21 study centres across India; 2 in New Delhi, 1 each in Ahmedabad, Pune, Jaipur, Chandigarh, Ranchi, Hazaribagh, Guwahati, Jammu, Allahabad, Patna, Rohtak, Dhanbad, Indore, Mangaluru, Bhubaneswar, Faridabad, Kochi and Srinagar. The Academy houses seasoned faculty members who coach students to success in Civil Services Examination. Chanakya IAS Academy aims to develop amongst its students a competitive attitude along with sound academic base with quality teaching and individual attention as its hallmark. The Academy organizes seminars and workshops with the help of civil servants and experts in soft skills to train the aspirants to think, feel and express like administrators.Chanakya IAS Academy, South Delhi Branch, 123-124, (IInd Floor), Satya Niketan, Benito Juarez Marg Opp. Venky College, Near: Dhaula Kuan, New Delhi - 110021 Ph: 011-64504615, 011-65428647