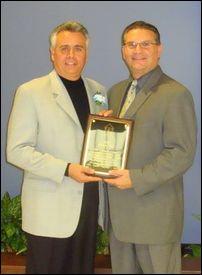 Alfred DiMora inducted into Gates Chili High School Hall of Fame Manufacturer of luxury automobiles and custom motorcycles honored for his life achievements Palm Springs, California - October 21, 2009 - Alfred DiMora has been inducted into the Hall of Fame of Gates Chili High School in Rochester, New York. He was chosen for the award in recognition of his humanitarian efforts and the major contributions he has made to the American computer and automobile industries. A reception was followed by a formal induction ceremony held at the school's Homecoming football game, complete with a parade entrance. DiMora then spent the next few days sharing his inspirational story with both elementary and high school students. School district executive John Brondon created the idea of adding the induction ceremony as a way to inspire the current student body to achieve their dreams in life. DiMora credits Gates Chili for guiding him down the road to success. "The teachers always supported me in whatever I wanted to do," according to DiMora. "They were always very encouraging. I attribute much of my success later in life to that encouragement. I knew back then that I was going to build and manufacture my own cars. My own family thought I was crazy," he recalls, "up until the time they came to work for me!" he adds with a good-natured smile. While attending Gates Chili High School, DiMora was already tricking out his many cars, as well as those of his friends. Soon after graduation in 1975, he left for Santa Barbara, California, where within a short number of years he rose to become the owner of Clenet Coachworks, Inc., the manufacturer of the most expensive luxury automobile in the world. The company sold cars to such celebrities, dignitaries, and car enthusiasts as Sylvester Stallone, Julio Iglesias, Rod Stewart, Wayne Newton, Farrah Fawcett, and Aaron Spelling. Fortune Magazine called the Clenet the "American Rolls Royce", and it was used in such movies and television shows as "Dynasty", "Dallas", and "Dragnet". DiMora also designed and manufactured another hand-built automobile, the Sceptre, which won the "Best Car" award at the 1978 Los Angeles Auto Show. Now, as a leading U.S. luxury car designer and manufacturer of automobiles and custom motorcycles, he is building the most technologically advanced luxury car in the world, the Natalia SLS 2, introducing the 1200 HP Volcano V16 engine, with a price tag starting at $2 million. (See www.dimoramotorcar.com.) In addition to the Gates Chili honor, DiMora has been chosen to receive a star on the Palm Springs Walk of Stars. In a presentation at 11:30 am on November 15, 2009, his star will be embedded in the sidewalk directly in front of the Palm Canyon Theatre on Palm Canyon Drive. Many celebrity friends will be speaking on DiMora's behalf, including Academy Award-winning actor Ernest Borgnine, Larry Wilcox of "CHiPs", legendary car customizer George Barris, and singer/comedian Steve Rossi of "Allen & Rossi". Actor Bo Hopkins will arrive in his maroon '50 Merc, like the one he drove in "American Graffiti", the movie that inspired DiMora to pursue a career in automotive design and manufacturing. Car and motorcycle enthusiasts are encouraged to drive their own pride and joy to the event, which is free and open to the public.About DiMora Motorcar Based in Palm Springs, California, DiMora Motorcar crafts automobiles designed to exceed expectations in every aspect of automotive engineering. It is the first auto company to reveal the design, production, and testing of its automobiles via the Internet so that people around the world can learn about and participate in the process. Alfred J. DiMora, founder and CEO, has produced two of America's finest luxury automobiles, the Clenet, as owner, and the Sceptre, as cofounder. When President Reagan declared 1986 the Centennial Year of the Gasoline-Powered Automobile, the Clenet was selected as the Official Centennial Car, resulting in honors for DiMora and the Clenet at the Automotive Hall of Fame in Michigan. For more information, including how your company can become a Technology Partner, please visit www.dimoramotorcar.com.Yvonne DiMora DiMora Motorcar 1775 E. Palm Canyon Drive #110-121 Palm Springs, CA 92264 Phone: 760-534-2317 Fax: 775-552-2317 ydimora@dimoramotorcar.com www.dimoramotorcar.com

09-28-2022 | Arts & Culture
Galerie Scheffel
"Alfred Haberpointner" exhibition at Galerie Scheffel
Galerie Scheffel is pleased to present a new exhibition featuring the work of the internationally esteemed Austrian sculptor Alfred Haberpointner. The main focus will be on the most recent works in his long-standing work series: a variety of abstract head sculptures as well as diverse examples of his characteristic "Gewichtungen" (weightings), "Haken" (hooks) and wall objects. In his predominantly wood or metal scuptures, Alfred Haberpointner explores the inter-relationship of body
08-27-2021 | IT, New Media & Software
Global Market Monitor
Desktop Search Software Market by Trends, Dynamic Innovation in Technology and 2 …
This Desktop Search Software market report is the precise description of advancement, roadblock and factors which have positive or negative effect on the market growth. Current trends and earlier benchmarks are the chief factors on which this market analysis report is based on. It also talks about a number of crucial aspects, which contribute greatly to the expansion as well as progress of the market. Get the complete sample, please
11-22-2019 | Arts & Culture
BookBuzz.net
Author Alfred Wurr Releases New Sci-fi Fantasy Novel - Phantom Frost
Author Alfred Wurr Releases New Sci-fi Fantasy Novel - Phantom Frost Author and video game developer Alfred Wurr is pleased to announce the release of his first novel, a new sci-fi fantasy, Phantom Frost. Released by his company Wurreal Games in October 2019, the book is receiving positive feedback and compliments from readers and reviewers. This is the first book in a planned series of science fiction/fantasy novels set in the universe
06-13-2019 | Business, Economy, Finances, B …
INS Trade Media Service
Next milestone in digital transformation: thyssenkrupp presents artificial intel …
• thyssenkrupp Materials Services relies on Microsoft for in-house solution development • AI as an essential component of the holistic digitalization strategy • Customers benefit from individualized offers and more efficient processes thyssenkrupp Materials Services continues to drive digital transformation: Since early 2019 an artificial intelligence solution (AI), supported by Microsoft’s cloud platform Azure, has been integrated into the processes of the largest materials distribution and service provider in the Western world. "alfred" supports his
11-14-2018 | Advertising, Media Consulting, …
HTF Market Intelligence Consulting Pvt. Ltd.
Autoharp Market Is Booming Worldwide | Alfred, Homespun, Aquila, Carl Fischer, E …
HTF MI recently introduced Global Autoharp Market study with in-depth overview, describing about the Product / Industry Scope and elaborates market outlook and status to 2023. The market Study is segmented by key regions which is accelerating the marketization. At present, the market is developing its presence and some of the key players from the complete study are Alfred, Aquila, Carl Fischer, Endust, Fjh Music, Hal Leonard, Homespun, Kjos, Mel
05-23-2017 | Leisure, Entertainment, Miscel …
Worldwide Business
Global Guitar Kits Market 2017 : Alfred, Allparts, Bigsby, Cleartone, CruzTOOLS, …
A market study based on the "Guitar Kits Market" across the globe, recently added to the repository of Market Research, is titled ‘Global Guitar Kits Market 2017’. The research report analyses the historical as well as present performance of the worldwide Guitar Kits industry, and makes predictions on the future status of Guitar Kits market on the basis of this analysis. Get Free Sample Copy of Report Here : http://bit.ly/2qc6qOz Top Manufacturers
Comments about openPR
9 o'clock: discuss press release with client, 10 o'clock: submit release to openPR, within the briefest possible time release is published and displayed in a prominent place on openPR.de. I am thrilled!
Zehra Spindler, Calypso Now! - Communication Agency