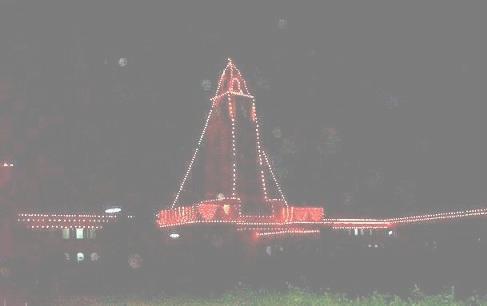 With students from all over the country enrolling for various degrees, the celebrations of any festival at BITS Pilani truly represents melting point of cultures echoing Gurudev Rabindranath Tagore's lines in National Anthem - Punjab Sindhu Gujarata Maratha Dravida Utkala Banga.With the main buildings of the Institute which included the majestic tower that empowers all BITSians and hostels as well faculty quarters illuminated with both ordinary and fancy electric lights, candles and traditional diyas, the entire Pilani campus of Birla Institute of Technology and Science popularly known as BITS was shining on the dark new moon day night of Diwali like a jewel in the crown of the desert state of Rajasthan. Spread over the entire Saturday, the campus had its diwali celebrations in styles of various states of India.In the morning of the day after Diwali, for the past several decades, BITS Pilani has been having the tradition of celebrating in the workshop of the Institute, pooja for Viswakarma who is considered as the divine engineer and architect according to Hindu mythology. In the eastern parts of India like Bengal, this pooja is celebrated every year on September 17. The southern parts of the country like Tamil Nadu celebrate the ninth day of Dussehra as Ayudha pooja in honour of Viswakarma. This year BITS Pilani celebrated Vishwakarma Pooja on Sunday October 18. In the evening of the day after Diwali, the Faculty Division II Quadrangle of the Institute witnesses the Diwali Milan anchored by the Staff Association of the Institute in which several songs and dances are performed by members of staff, their wives and children. For the alumni of BITS spread across various continents from Australia to America, the Diwali celebrations at Pilani always rekindle fond memories of their student years at this top ranking institution.About BITS Pilani: The Birla Institute of Technology and Science - BITS Pilani is a Deemed to be University established vide Sec.3 of the UGC Act, 1956 under notification No. F.12-23/63.U-2 of June 18, 1964. NAAC - National Assessment and Accreditation Council reaccredited BITS with 3.71 CGPA out of 4 and awarded “A” grade “Very Good” status. BITS offers degrees in various disciplines presently at Pilani, Dubai, Goa and Hyderabad campuses. BITS Pilani has done pioneering work in industry university collaborations in terms of Practice School and Work Integrated Learning Programmes. It is indeed a matter of pride that for the year 2009, BITS Pilani has been ranked among the top ranking universities along with IITs in various Magazine surveys such as India Today, Outlook, LiveMint etc.Dr BR Natarajan Professor & Vice President BITS Alumni Association - BITSAA BITS Pilani Rajasathan 333031 India Phone 91-1596-242210 Fax 91-1596-244183 Email: brnt(at)bits-pilani.ac.in Website: http://www.bits-pilani.ac.in

04-24-2020 | Science & Education
Tafheem ul Quran Academy
Online Quran Institute Near Me
Tafheem ul Quran is an easy way for you and your kids to learn Quran and Mathematics online, All you need is a PC/laptop or any other deivce and Internet connection. Tafheem ul Quran has been established with the aim of teaching the Holy Quran with proper Punctuation and vocabulary, our tutors are well qualified and experienced and provides classes with proper Tajweed Rules Via Skype online globally our services: Quran Learning
08-31-2016 | Health & Medicine
TeleMental Health Institute Inc.
TeleMental Health Institute: Master TeleWorkshop
29 August 2016, San Diego, CA The TeleMental Health Institute will present a Master TeleWorkshop addressing the interesting and important topic: Telemental Health Overview of Legal and Ethical Online Marketing. This webinar offers a strong evidence base and supports several successful telemental health models which have been documented since 1959. The webinar is designed for professionals interested in engaging in the field of telemental health, primarily beginning and intermediate-level
09-03-2013 | IT, New Media & Software
SASM Institute
SASM Institute gets into Social Network Game
Scientists, Inventors, Artists, Designers and Entrepreneurs now have their own Social Media platform designed to help each other crowdfund their ideas. San Francisco, CA - August 26 2013 - The SASM Institute announced today the launch of SASM Net, a new online social media platform for connecting scientists, engineers, designers, artists and innovators for discussion, collaboration and project creation. SASM Net includes a free “easy-blogging” platform for first time bloggers
08-26-2013 | IT, New Media & Software
ASDIS Solutions GmbH
KVANT Institute relies on ASDIS software
Berlin, 18th June 2013. The Russian technology company KVANT becomes new customer of ASDIS Solutions The desktop & server management of the eastern Europeans will profit from the benefits of the ASDIS Management Suite. “In this case, ASDIS has been aligned to the specific requirements of KVANT”, says Daniel Lichterfeld, managing director of ASDIS Solutions GmbH. The full spectrum of the deal covers the software management, the installation of operating
01-24-2013 | Advertising, Media Consulting, …
Virtual Edge Institute
Virtual Edge Institute Acquires Engage365
Merger will help Virtual Edge Institute to better serve the growing needs of meeting planners, event designers, learning architects and marketers and build engagement around their programs Orlando, FL January 14, 2013 VEI – The Virtual Edge Institute, an organization dedicated to advancing engagement around events, meetings, learning and marketing programs through technology and best practices, today announced at Convening Leaders, that VEI is obtaining the engage365 brand, website, membership
08-30-2011 | Science & Education
Institute of Management Technology
Institute of Management Technology
The National Education Summit 2011 was held at The Oberoi hotel, New Delhi on 11thJune. Organized by Dainik Bhaskar Group, the summit included an in-depth discussion about the challenges Indian B-schools are facing. Several management experts of international repute shared their views around bridging the quality gap present in the current education system. The director at IMT Ghaziabad, Dr. Bibek Banerjee, contributed to the discussion with his insight on various
Comments about openPR
We publish our press releases on openPR.de because we like people who are "open" - just like us.
Frank Obels, CEO, INCONET - Informationssysteme, Communication und Netzwerkberatung GmbH