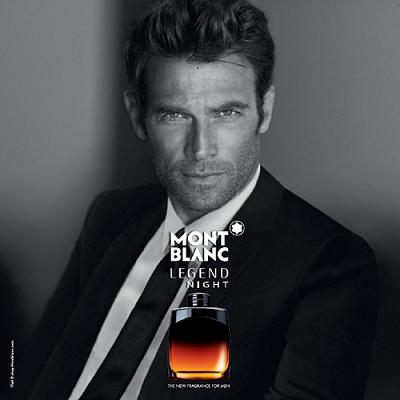 The Montblanc legacy For over 100 years, Montblanc has designed long lasting and essential accessories, writing instruments, watches and leather goods. Its products are timeless: a Meisterstück is still an eternal pledge, as Montblanc Augmented Paper is a companion on the path towards the future. In 2011, a new chapter opened in the history of the Maison, when it launched the Legend fragrance. Montblanc Legend has won its reputation thanks to its signature scent and unique visual captured by Peter Lindbergh. The famous photographer depicts a Montblanc man who is as reassuring just as he is inspiring. In 2015, this timeless masculine saga continued with Montblanc Legend Spirit, a fresh and bold version of the fragrance. Echoing this record of excellence, the third olfactory chapter now reveals an equally charismatic, but more mysterious side to the extraordinary gentleman. This new timeless fragrance emphasizes the nocturnal aspect of his personality. Its name is Montblanc Legend Night. The legend continues… This new story features the same man, in a more intimate setting. It is early evening and he has just joined his friends in his favourite club; an inner circle of English gentlemen in London, or a charity gala in Hong Kong. They enjoy a great evening together over drinks and lively debate. The Montblanc man and those who are close to him always see their projects to completion. In the midst of the crowd, his minimalist elegance is irresistibly appealing. His magnetic presence speaks for itself. His words matter, his eyes fascinate. Montblanc Legend Night, a hauntingly captivating dimension.Fragrance Montblanc Legend Night paints a top-flight olfactory picture with remarkable contrasts of light and shadow. Designed by the talented duo Antoine Maisondieu and Olivier Pescheux who set out to reveal “the charisma of the wearer”, this juice is a magnetic woody fragrance, ultra-masculine yet free from aggression. Mysterious. And reassuring. The Eau de Parfum brings out the elegance and aura of the Legend Night man.The aromatic notes of clary sage and peppermint, enhanced with cool spices (cardamom) and sparkling bergamot, set the fragrance’s fresh and lively tone. The opening is bright, like the natural radiance of our man’s aura. The middle notes immediately counterbalance this first impression of refreshing coolness with their warm elegance. The precious scents of cedar wood blend well with the floral lavender tones, a classic in men's fragrances, and slightly powdered violet. "In the base notes, we wanted a strong and memorable signature, full of contrasts,” explain the two noses. “On one side some dense and vibrant woods with a duo of Vetiver and Patchouli Wood, and on the other, the enveloping depth of Musk and velvety black Vanilla.” The signature counter-accord brings out the distinctive character of the Montblanc man through light and shade.Noble material The aesthetics of the Montblanc Legend Night bottle break with the duality of the house’s black and white codes, clearing the path for an amber colour that is reminiscent of wood, the ultimate authentic material or a fiery liquor. Embossed with relief on the upper part of the bottle and on its stopper, the emblem inspired by the snow-capped Mont Blanc and the symbol of the highest standards of quality and perfection is engraved in the black metal. The box, in the same cognac tones, is reminiscent of an inlaid keepsake box where our man stores his treasured possessions. Its deep metallic reflections capture the light. The name appears in elegant gold calligraphy.A friendly gent The English model Simon Clark embodies the Montblanc man yet again. Photographed by John Balsom, who has a gift for revealing a personality, he looks right into the lens for the very first time. The eye-to-eye contact, made in natural light, presents Simon Clark just as he is. His innate virility sets the scene ablaze. He is instantly captivating. Nothing will disturb this dialogue... until morning comes.In the more than 30 years since its founding, Inter Parfums, Inc. has been selected as the fragrance and beauty partner for a growing list of brands that include Abercrombie & Fitch, Agent Provocateur, Anna Sui, Balmain, Banana Republic, bebe, Boucheron, Coach, Dunhill, Hollister, Jimmy Choo, Karl Lagerfeld, Lanvin, Montblanc, Oscar de la Renta, Paul Smith, Repetto, Rochas, Shanghai Tang, S.T. Dupont and Van Cleef & Arpels. Inter Parfums is known for innovation, quality and its ability to capture the genetic code of each brand in the products it develops, manufactures and distributes in over 100 countries worldwideSalam Studio & Stores Wafi Mall, P.O.Box 4199, Dubai-U.A.ECOMAPNY: SALAM STUDIO AND STORES Contact: Ahnif Sajid Phone: +971-4704 8364 Email: ahnifsajid@live.com http://www.interparfums.fr/accueil.php