ISG-Group handed over new wind tunnel to Fööni in Finland 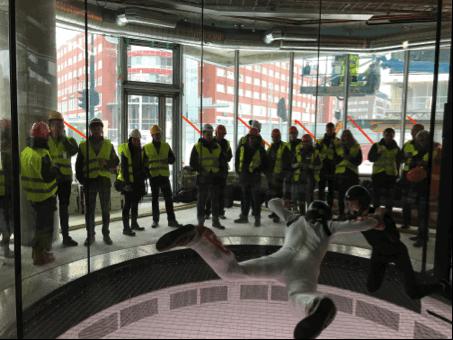 Gladbeck, 14. March 2018. Indoor Skydiving Germany Group (ISG), German manufacturer of high performance freefall simulators, has handed over a new single fan wind tunnel integrated into a shopping mall to operator Fööni in Helsinki, Finland. The ISG-Group is specialized on Indoor Skydiving windtunnels with a unique high quality airflow generating system. After the new windtunnel in Helsinki was handed over, operator Fööni is now going into first test operation before the official opening in autumn 2018It is the first ISG wind tunnel in Finland with a round 14ft flight chamber and a single fan system which is fully integrated into the new Redi shopping mall in the city center of Helsinki. This type of project is unique in the ISG history, because the integration into a shopping center requires a perfect sound insulation of all components and a hundred percent absorption of all vibrations, created by the wind tunnel. The single fan wind tunnel is the most powerful system ISG has ever built. Another advantage of the new single fan wind tunnel is the energy efficiency. The system requires in average 15% less energy than all other ISG wind tunnels before.Boris Nebe, Managing Director of ISG-Group: “We are happy to announce that we sucessfully launched our first high performance wind tunnel which is completely integrated into the new Redi shopping mall in Helsinki. This project was a big milestone for us and also for the Indoor Skydiving market itself that becomes more popular to be located in the main public spots.”The wind tunnel technology of ISG-Group was developed in cooperation with the aerospace department of the Technical University of Berlin and other aeronautical engineering companies and is internationally recognized for its energy efficiency, safety and airflow quality. The first reference facility opened in 2009 in Bottrop, Germany (Indoor Skydiving Bottrop GmbH – www.indoor-skydiving.com). Since then ISG-Group has built and started multiple wind tunnel facilities for customers; many additional projects are in construction or planning phase.Driven by mankind’s dream of flight, ISG-Group delivers and builds vertical wind tunnels for freefall simulation for the sport of indoor skydiving and the entertainment market. The high performance facilities of ISG-Group are used also as professional training facilities for skydivers and military freefall units. In addition to that they also deliver a new experience to the entertainment market. The founders of this company developed in the recent years the most advanced and most silent vertical wind tunnel technology. It is internationally recognized for its energy efficiency, design, safety and airflow quality. Managing Director is Boris Nebe, the headquarter is in Gladbeck, Germany. Information under www.isg-group.deISG Group Am Wiesenbusch 2 45966 Gladbeck Email: anke.culemann@isg-group.de Web: www.isg-group.de