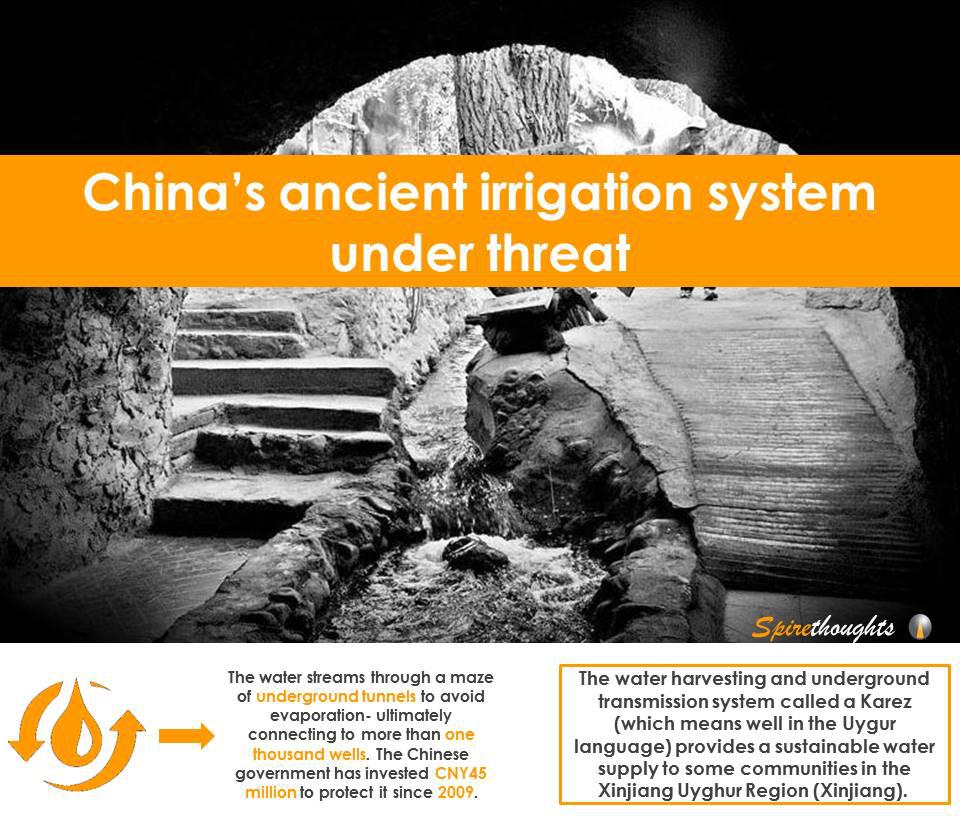 One of China’s most recognized ancient oases – the Karez – is a construction marvel built by the Uyghur people. The water harvesting and underground transmission system called a Karez (which means well in the Uygur language) provides a sustainable water supply to some communities in the Xinjiang Uyghur Region (Xinjiang) as well as in some countries like Iraq, Iran and Kurdistan.The irrigation method carries glacial groundwater to the Turpan Basin from the eastern side of Tianshan Mountains. The water streams through a maze of underground tunnels to avoid evaporation. The water ultimately connects to more than one thousand wells.Although Turpan is the world’s largest producer of raisins due to the Karez, challenges remain. Silt accumulation and high demand for water from nearby factories threaten the water supply.Furthermore, with the site’s potential to become a UNESCO World Heritage site, the Chinese government has invested CNY45 million to protect it since 2009.Will China’s ancient Uyghur irrigation system be able to survive and thrive?For more details, please visit our newsroom section on our official homepage at https://www.spireresearch.com/newsroom/spirethoughts/chinas-ancient-irrigation-system-under-threat/Spire Research and Consulting was established in 2000 to address a gap in the research and consulting industry in global emerging markets. Unlike most agencies that focus on traditional consumer research, our founders saw a profound need for holistic research projects.Unit 501-502, DLF City Court, DLF Phase III, Sector 24, Gurugram – 122002, India Telephone: (91) 124 421 6144 E-mail: india.info@spireresearch.com

11-11-2021 | Business, Economy, Finances, B …
Spire Research and Consulting
Leadership Succession in Spire
In this planned leadership succession, Rio Funayama will assume the position of CEO of Spire. Jeffrey Bahar and Japnit Singh will each assume the position of joint COO and will extend their current executive leadership functions with respect to Spire’s operations. Go Sakano will assume the role of CFO of Spire. November 1, 2021, Singapore – The Spire Research and Consulting Group and its parent company Yamada Consulting Group Co., Ltd
01-29-2021 | Business, Economy, Finances, B …
Spire Research and Consulting
Spire expands global footprint with inaugural venture into the MENA region
Spire Research and Consulting, leading provider of business research and consulting, and a group company of the TSE Listed Yamada Consulting Group, has expanded its global footprint to the markets in Middle East and North Africa (MENA). The company has entered into a joint venture (JV) with United Arab Emirates (UAE) headquartered ZASK Associates, a leading provider of business and strategy consulting to companies in the MENA region. The new company,
02-14-2020 | Advertising, Media Consulting, …
spire research and consulting
Spire speaks on Cloud computing and IoT at the GATES Indonesia ICT Channel Summi …
Spire was honored to participate in the GATES Indonesia ICT Channel Summit, 2019 as Research Partner. The Summit was held on 18-20 June, in Bali. Albertus Edy Rianto, Senior Manager and Astri Welmien Tompodung, Senior Consultant, Spire Indonesia, shared their insights on the rise of Cloud computing and the internet of things (IoT) in Indonesia's business landscape. The speakers discussed how, through the continued technological advancement, ICT is becoming a general
01-10-2020 | Business, Economy, Finances, B …
Spire Research and Consulting
Will compost turn out to be the magic mineral for African agriculture?
Introducing phosphorous back in African soil is important as it helps plants in early life to build root systems. 80 per cent of phosphate reserves are controlled by five countries. Morocco has 75 per cent of the global reserves. After an 800 per cent price hike in 2008, phosphate rock has become costly. An alternative option is compost. Compost not only provides phosphorous and other nutrients but can also restore the soil