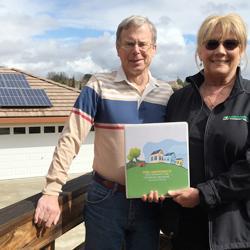 Last month, Paso Robles resident Dan Robinson applied for a solar energy permit. Little did he know that his application would be the 1,000th alternative energy permit filed in the city of Paso Robles.Atascadero, CA, USA -- Last month, Paso Robles resident Dan Robinson decided he wanted to save money and do the right thing when he called Solarponics and applied for a solar energy permit to install solar on his home. Little did he know that his application would be the 1,000th alternative energy permit filed in the city of Paso Robles. With Mr. Robinson's solar install, Paso became the first city to reach 1,000 installs in San Luis Obispo county."These seven panels on my roof can do the same for me as a multi-billion dollar power plant... with no pollution," says Mr. Robinson. "Solar makes so much sense on so many levels. It's the right way to go."Solar energy first became popular in the late 1970's when President Carter installed solar water heating panels on the White House. At the time, electric rates hovered around a low of 5¢/kWh. Solar electric and solar water heating systems were still quite a bit more expensive than ulitily-purchased energy.Since the mid, California has seen a nearly 300% increase in the price of energy, currently averaging 19¢/kWh, while solar energy prices have dropped significantly, making solar electric far more affordable than grid-tied energy today.Nationally, solar installs in the U.S. have grown from 1.2 gigawatts (GW) in 2008 to an estimated 34GW today. Paso Robles has gone from under 20kW of solar installs in 2008 to over 6 megawatts (MW) of residential solar today. This equates to more than $50 million in collective energy savings for Paso Robles homeowners over the next 20 years."Even with the recently imposed solar panel tariffs, solar energy continues to be a significant money-saver. The more energy rates increase, the more solar makes sense. And rates are always increasing." says Kristian Emrich, Solarponics vice-president.To celebrate the 1,000th residential solar energy install in Paso Robles, Solarponics is donating solar powered systems for electric golf carts to north county schools, and converting those electric golf carts to solar-power."Five years ago, we could not have imagined reaching this milestone...1,000 solar roofs in Paso... 10,000 county-wide. And now, here we are. Our vision is to see renewable energy systems on every single structure in the county. So, there's a lot of work to do still," says Mr. Emrich.About Solarponics Solarponics is the Central Coast's go-to renewable energy installer, helping businesses and homeowners save money and achieve energy independence. Solarponics has installed over 5,000 energy systems throughout the county since 1975. The longest continuously owned and operated solar company in California, Solarponics is still privately owned and locally operated. For more information, visit http://www.solarponics.com, or like them on Facebook (http://www.facebook.com/solarponics).Media Contact: Frank Scotti Solarponics, Inc. 4700 El Camino Real Atascadero, CA 93422 805-466-5595 frank@solarponics.com http://www.solarponics.com