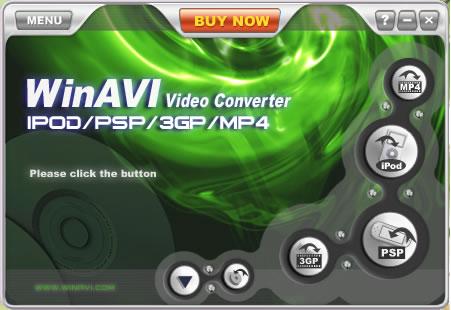 WinAVI 3GP/MP4/PSP/iPod Video Converter is software for MP4/3GP file conversion of portable video device such as iPod/PSP, It can convert almost all video formats, for e.g., DivX, XviD, MOV, rm, rmvb, MPEG, VOB, DVD, WMV, AVI to iPod/PSP or other portable video device, MP4 player or smart phone. It has an unmatchable speed and high quality. And it supports to transport your video files to your iPod/PSP directly. WinAVI 3GP/MP4/PSP/iPod Video Converter let you enjoy the film with your iPod/PSP. It is a must-have for anyone who wants to see video on iPod/PSP or other portable video devices. Some details: 1. Converts all formats to Apple iPod Video. 2. Converts all formats to Sony PSP. 3. Converts all formats to MP4 format that can be played on general portable video device such as MP4 player. 4. World's fastest video conversion speed. 5. User-friendly interface that is easy to use. 6. Transport video files to iPod/PSP directly. No need to install iTunes or other softwares. 7. Supports batch conversion. 8. Stunning video and audio quality. 9. Supports clip/zoom/soften the video. 10. Supports adjust many video/audio options for MP4 files. For example, video/audio sample rate, bit rate, video size... 11. Has the option to preview the video in real-time. 12. Has the option to automatically shutdown your computer when the conversion has been completed. ZJMedia Digital Technology Ltd. was started in February 2003 after many years of preparation. The company specializes in developing computer media players, DVD players, and other software such as WinAVI Video Capture and WinAVI Video Converter. At the present time, there are many senior tech members working for the company. Our team of senior tech members has designed a set of DVD decoding technology and converting technology that have outstanding performance. Currently, we are trying to set up a special retail system and support network to give the best service to you. The company is constantly trying to expand into more forms of multimedia software for computers. Name: ZJMedia Digital Technology Ltd., Address: Room C-302, JiaHua building, Shangdi 3rd street, HaiDian District, Beijing, China Mail: support@winavi.com Presscontact: support@winavi.com

06-29-2006 | Media & Telecommunications
ZJMedia Digital Technology Ltd.,
WinAVI Video Converter
WinAVI Video Converter is a complete solution for video file converting and burning. It supports convert AVI to DVD, AVI to VCD, AVI to MPEG, AVI to MPG, AVI to WMV, DVD to AVI, MOV convert, all video format to AVI/WMV/RM and burning vcd/svcd/dvd. WinAVI Video Converter is easy to use and powerful for experts. Just one click to convert with beautiful user interface. Burning VCD/SVCD/DVD is supported. It supports almost
06-19-2006 | IT, New Media & Software
ZJMedia Digital Technology Ltd.,
WinAVI Video Capture
WinAVI Video Capture can record the films from your AV device, such as video tapes and web-cam. You can save it on your computer or burn it to disc. Play it back on your PC & home DVD player. It can save the film in AVI, WMV, DivX, RM, DVD, VCD, SVCD or MPEG1/2/4 formats, and burn it to DVD, VCD or SVCD discs. Powerful video compress engine makes the perfect video