Press release from: Friends of the Earth - Canada 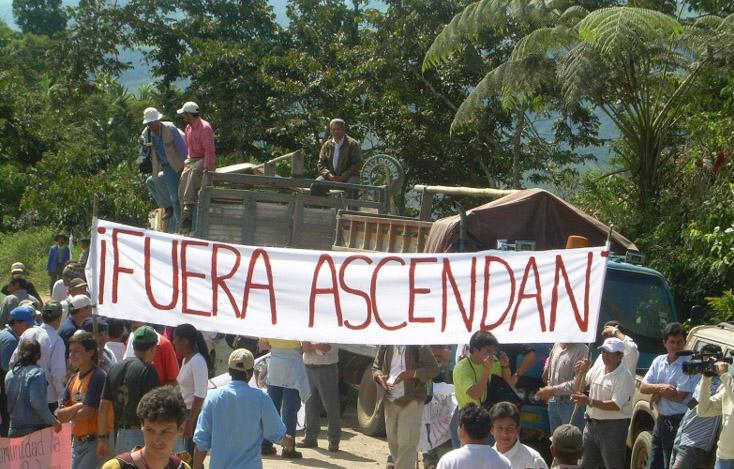 (Ottawa, June 14, 2006) On the eve of a federal government-led initiative to debate regulating the activities of Canadian mining companies abroad*, Friends of the Earth has formally petitioned the Auditor General to investigate a junior mining company’s activities in Ecuador’s endangered Cloud Forest. “The Canadian government provides massive financial and diplomatic support to its mining companies, and Ascendant Copper’s activities (ACX) offer a clear example of how these companies are being allowed to “fly the Canadian flag” abroad with blatant disregard for Canadian values of peace, democracy and corporate accountability,” says Beatrice Olivastri, CEO Friends of the Earth Canada. “The voluntary codes of conduct used to regulate mining companies are clearly not working and FOE urges the Harper government to use the opportunity provided by the roundtable process to put into practice the accountability pledge it so often refers to.” The petition submits testimony in the form of a documentary film on community unrest incited by Ascendant Copper tactics to undermine the communities’ expressed wish to protect the Intag Cloud Forest from mining exploitation, which can be viewed at www.ascendantalert.ca. It calls on federal Ministers to detail Canada’s provision of financial, diplomatic and policy support for the activities of Canadian incorporated mining entities that operate abroad and requests additional reports on the enforcement of corresponding laws and accountability on various codes of practice. “In a situation where even the Ecuadorian Minister of Energy and Mines is writing to Ascendant stating that it is concerned with the escalation of conflict in the Intag and abdicating the government’s responsibility for the social problems caused by the company’s activities, where are the affected communities to turn?” asks Andrée Germain, International Campaigner for Friends of the Earth. “When you listen to the Minister of Foreign Affairs talk about Canada’s respect for democracy, human rights, the rule of law, indigenous issues, civil society participation and corporate social responsibility, you have to wonder if he’s even aware of the role his government is playing in facilitating the advancement of mining in the Intag Cloud Forest.” “The development of the proposed Junin mine, an expensive White Elephant, is completely at odds with what we hear about Canadian values,” says Carlos Zorrilla, President of Decoin. “We are shocked and dismayed by Ascendant Copper’s underhanded tactics that ride roughshod over democratic processes, generating deep social conflicts in our area. Is this the kind of company that represents Canada today?” -30- Photos are available at www.huffstrategy.com/MediaManager *The first of the Canadian government’s national roundtables on corporate social responsibility (CSR) and the extractives sector takes place in Vancouver on June 14-15. It brings Canadian and international experts together to participate in discussions on international human rights and environmental standards and benchmarks while operating abroad.Friends of the Earth is a voice for the environment, nationally and internationally, working with others to inspire the renewal of our communities and the earth, through research, education and advocacy.Beatrice Olivastri, CEO, Friends of the Earth Canada, cell 613-724-8690 Carlos Zorrilla, President Defensa y Conservación Ecológica de Intag (DECOIN) ++593 6 2648509 or intagcz@imbanet.net Andrée Germain, International Campaigner, Friends of the Earth Canada 613-241-0085 ext.30

03-11-2021 | Business, Economy, Finances, B …
Shareholders Foundation
Investigation announced for Investors of Ascendant Digital Acquisition Corp. (NY …
An investigation was announced concerning whether the takeover of Ascendant Digital Acquisition Corp. is unfair to NYSE: ACND stockholders. Investors who purchased shares of Ascendant Digital Acquisition Corp. (NYSE: ACND) and currently hold any of those Ascendant Digital Acquisition Corp. (NYSE: ACND shares have certain options and should contact the Shareholders Foundation at mail@shareholdersfoundation.com or call +1(858) 779 - 1554. The investigation by a law firm concerns whether certain officers and directors
01-30-2020 | Business, Economy, Finances, B …
Shareholders Foundation
GPB Capital Holdings, LLC Investor Alert: Lawsuit filed against GPB Capital Hold …
An investor filed a lawsuit in the U.S. District Court for the Western District of Texas over alleged violations of Federal Securities Laws by GPB Capital Holdings, LLC, Ascendant Capital, LLC and the Brokerage Firms in connection with certain allegedly false and misleading statements. Investors who between June 6, 2013 and October 25, 2019, inclusive (the "Class Period"), purchased or otherwise acquired interests in various GPB funds, including: GPB Holdings, LP;
01-30-2019 | Business, Economy, Finances, B …
The Insight Partners
IT BFSI Market to see Ascendant CAGR Growth for Next Five Years by Accenture, Ad …
Banking, Financial Services and Insurance (BFSI) offer various types of banking solutions and services, usually used by the BPOs or IT firms and in companies that manage data processing and software development activities. Integration of IT with the BFSI industry enables to provide technological solutions to the firms which have large confidential data and unsorted data along with concerns for data security. The key factors such as customized IT solutions
10-09-2017 | Business, Economy, Finances, B …
Interlocking Chain Actuator Market status 2017-2022
Interlocking Chain Actuator Market status 2017-2022 Rockwell Automation, Serapid …
Global Interlocking Chain Actuator Market Size, Status and Forecast 2022 provides Market information about Manufacturers, Countries, Type and Application.This Industry report also states Company Profile, sales, Interlocking Chain Actuator Market revenue and price, market share, market growth and gross margin by regions. Top Manufacturers/Key Players: Rockwell Automation Serapid Tsubaki Deutschland Framo Morat Revolvy Acrodyne Ascendant Technologies Ltd Li Jin Industrial Co., Ltd Honeywell International Inc. Download Free Sample Copy Of this Report @ https://goo.gl/T9qjFf This report provides detailed analysis
06-16-2017 | Health & Medicine
Market Research Hub - Pharmaceutical Industry
U.S. Drug Store Retailing Market Anticipated for Ascendant Sales Growth Driven b …
The outlook for the drug store industry is very positive since many years. Drug stores have a natural advantage because they always have been seen as a pharmacy-first format. Recently, it has been analyzed that the U.S. leading drug stores have continued to expand their retail presence. To explore more in-depth information on U.S. retail market, Market Research Hub (MRH) has freshly added a new report which is titled as
05-21-2010 | Logistics & Transport
roTeg AG
Robot Technology in the Ascendant
Multi Talent PARO® Juggles with Balls At the shared booth of the Ministry of Economic Affairs and Energy of the State of North Rhine-Westphalia, the PARO® palletising robot demonstrated its skills and flexibility when handling unusual package types: In addition to boxes, also balls were palletised in Hannover this year. The PARO® robot, originally designed for palletising processes at the end of production lines, placed balls onto an air stream at the
Comments about openPR
We publish our press releases on openPR.de because we like people who are "open" - just like us.
Frank Obels, CEO, INCONET - Informationssysteme, Communication und Netzwerkberatung GmbH