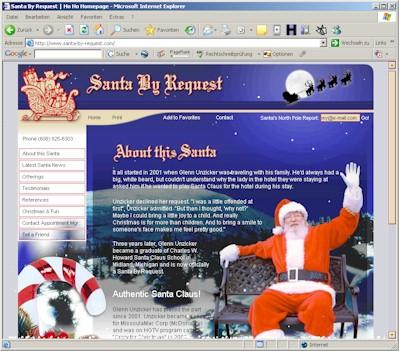 Sun Prairie, WI (U.S.A.), June 2, 2006 While ordinary Santa Clause players start their show no earlier than October, Glenn Unzicker uses freaky guerilla marketing tactics in summer to successfully promote his Christmas business. All over the world in half a year big saucer eyes will expectantly wait on Santa's sleigh tour. Many families hire a Santa Clause player to make Christmas a perfect illusion for their kids. One of those players is Glenn Unzicker (54), who has achieved growing popularity all across Wisconsin and beyond. Company parties, Christmas in July, appearances at McDonald's, Pizza Hut, and shopping malls - Unzicker is everywhere. The man with the real long white beard attended Santa School some years ago and learned how to perfectly embody the Santa Clause role. Unzicker does not play Santa - Unzicker is Santa - at least by the judgement of hundreds of children who have whispered their most secret wishes into Unzicker's ear. Unzicker's recipe for success is not only his authenticity when playing his role, but his unlimited creativity when it comes to publicity. No advertisement idea seems to be crazy enough, Unzicker tries them all. The crazier - the better. When Unzicker thought about a promotion for his website www.santa-by-request.com he found a 1 pixel sized advertisement banner on the Internet. Who would ever click an only 1x1 sized ad and visit his website? Unzicker realized the magnetic effect, this single pixel would have, because the pixel has been placed so prominently that hardly anybody can resist to click. The name of the pixel web is exactly what happens when you visit it: www.you-cant-resist.com. The idea is so out of the ordinary that it fits Unzicker's guerilla marketing just right. Santa from Wisconsin became one of the first who has won the pixel auction and thereby gained almost a thousand extra visitors to his web within a single week for only a few dollars. Wisconsin kids listen up: because of Unzicker's guerilla marketing with the uncommon 1-pixel-advertisement on www.you-cant-resist.com, lots of parents are now the ones with big saucer eyes. Their grown-up curiosity tricked them into reading the advertising message of Santa Clause. About Glenn Unzicker: Glenn Unzicker plays the Santa role since 2001. Before he used to work for the communicaton providers GTE and Verizon. Bitpalast GmbH Peter Debik M.A. Sensburger Allee 27 D-14055 Berlin Germany Phone 0049 30 32701892 Fax 0049 30 32701891 Phone/Fax in the U.S. 1-877-6178010

News-ID: 9391 • Views: 1478
Comments about openPR
OpenPR ist the nicest and most clearly laid out PR platform I have seen to this day. The press releases are displayed very nicely and clearly and without any unnecessary frills. The updates are fast and the finished release looks appealing and is clearly legible. Even with 16 years of experience one discovers new things from time to time. Congratulations!
Gabriele Ketterl, Director Marketing & PR, Menads