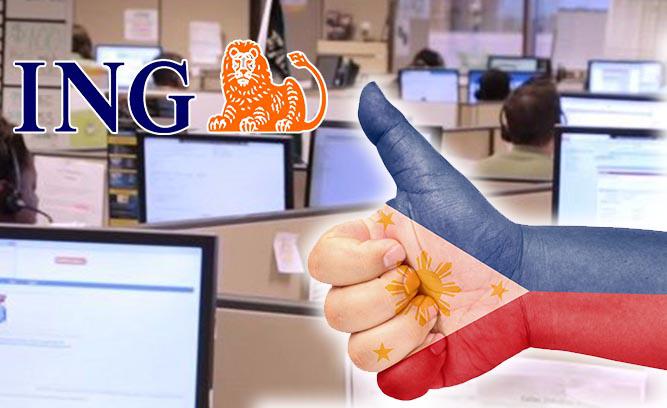 ING Group, a Dutch financial, is looking into growing their shared services center in the Philippines despite the threats in the business process outsourcing (BPO) industry due the challenges and setbacks in the local and global markets.ING Business Shared Services (IBSS), ING’s sole shared services center in Asia, remains confident that the Philippines will remain a “captive offshoring” market for international companies despite showing a slowdown in generating BPO revenues.ING Bank Manila branch senior economist, Joey Cuyegkeng, expected that the revenues from BPO would increase by less than 10% this year and would and would become relatively smaller in years to come.Cayugkeng noted that the BPO sector’s investment pledges has been experiencing a 22% annual drop because of “competition from other Asian economies, onshoring threats for US companies, security concerns, and uncertainties over incentives.”Coefficients Co. Ltd, is well aware of the market competition. However, the company is remaining positive that this year will end on a positive note and that 2018 has a lot in store. Just last week, their customer support representative for a US based tent manufacturing company attended a week long training to further enhance their skills and prepare them for the company’s UK expansion.These BPO revenues are responsible for about 47% of the country’s structural inflows last year and thus have a huge effect on the strength of the Philippine peso.Together with remittances from overseas, the $25-billion BPO sector has been one of the key drivers of domestic consumption.Still, ING stated last Thursday that they remain “deeply invested” in the country’s potential for growth and development. To support this, ING Bank Manila’s incoming country manager Hans Sicat stated that “the trend for captive shared services centers is to move more knowledge- and skill-based operations to countries where labor is not only available, but also adaptable. So the Philippines continues to be a good location for many global companies”,Contrary to the usual business model in the country where BPO companies serve as third party service providers, IBSS, as a captive shared services hub, serves to ING’s internal processing requirements in their Asia, Europe and North America based businesses. This business set up also allows ING to keep their employee attrition low, as well as let their staff learn and experience global practices and standards.Considering IBSS’ growth, onshore operations has been relocated to a bigger office spaces at the newly established World Plaza of Daiichi Properties, a Philippine Economic Zone Authority-registered site in Taguig City, to have room for more in-house processing from ING’s worldwide business. Having four floors presently, IBSS is expecting to double their office space take up over the coming years.Visit us at http://www.coefficientsco.com!About Coefficients Co. Ltd.Coefficients currently serves more than 20 global clients in knowledge services. The company’s eventual metamorphosis from BPO to KPO is a very good opportunity for it to be ideally positioned to lead in knowledge-based services via ramping up capacity and honing its people’s competency.Here at Coefficients, we go above and beyond for our clients. From assessment, to solution design, to training, transition and launch; we cater to every phase and we got you covered every step of the way. We don’t go for temporary aids. We strike to the core.2nd Floor Coefficients Bldg., Peridot cor. Aquamarine St., Pleasantville Phase 2, Ilayang Iyam, Lucena City, Philippines 4301

12-21-2018 | Advertising, Media Consulting, …
Coefficients Co. Ltd.
Coefficients’ Values and Why We Are a Company of Choice
As a provider of global solutions displaying process and domain distinction driving measurable results, Coefficients imbibes the following values: Inclusion – Coefficients hires any employee who is qualified to work in a BPO setting. Given the right skills and training, we hire fresh graduates (even K12 graduates and sometimes high school graduates), experienced professionals, unemployed mothers who spent most of their years taking care of their families and are now ready
01-29-2018 | Business, Economy, Finances, B …
Coefficients Co. Ltd.
Amidst China Threats PH Stands Firm to Defend the BPO Industry
Philippines’ outsourcing industry, amassing $23 billion, is facing a lot of risks: People’s Republic of China is quickly becoming a huge threat, the government is considering to the ditch some of the incentive programs, and the war in the south is tormenting the investors. In an interview, Rey Untal, head of IT and Business Process Association of the Philippines (IBPAP), stated that the industry and the government need to get
01-25-2018 | Business, Economy, Finances, B …
Coefficients Co. Ltd.
BPO Sector to Make an Epic Comeback in 201
Experts are seeing that the country’s business process outsourcing (BPO) sector will make an epic comeback next year due to its reestablished relationship with the US, in line with the booming demand for office spaces in Metro Manila making it one of Asia’s top office markets. This is as per the real estate veteran and president of property consulting firm Leechiu Property Consultants (LPC), David Lecchiu, who foretold that office space
01-23-2018 | Business, Economy, Finances, B …
Coefficients Co. Ltd.
BPO Sector to Boost Office Space Demand in 2018
Despite a slow growth in leasing deals with business processing outsourcing (BPO) companies earlier this year, experts from real estate consultancy, Santos Knight Frank are seeing that the sector will boost the demand for office spaces in 2018. "It's still the BPO that will take lead in terms of the office space take up," Kash Salvador, associate director for Investment and Capital Markets at Santos Knight Frank, stated in a press