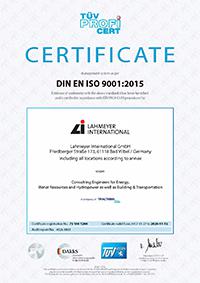 In late 2017, Lahmeyer International implemented the certification according to the new norm DIN EN ISO 9001:2015. After a successful recertification audit in early November 2017, TÜV Hessen issued the new certificates, which are valid until November 2020. In addition to Lahmeyer International, the subsidiaries Lahmeyer Deutschland, Lahmeyer München, GKW Consult and Lahmeyer International in Abu Dhabi were included in the matrix certification.The high quality of work is a supporting pillar of Lahmeyer’s success. To reliably ensure this consistent quality, the company introduced a quality management system as early as 1994, which was later switched to a process-oriented system. Previously, the company held a certificate according to the version DIN EN ISO 9001:2008 issued by the TÜV Hessen.The international norm for quality management ISO 9001 was revised in 2012 and was republished in September 2015 as ISO 9001:2015. The new norm replaced the version from 2008 and became valid with a transition period of three years. In September 2018, all certificates on the version 2008 will expire.Timely adaptation of the norm Therefore, Lahmeyer International and its subsidiaries addressed the new norm in due time and adapted the processes within the companies accordingly. The existing quality manual was restructured in compliance with the standard and uploaded into the Lahmeyer Intranet for all employees to access.Thus, the feedback the auditors of TÜV Hessen provided at the certification audits for Lahmeyer International and its subsidiaries was very positive, and TÜV approved issuing of the certificate.The most important modifications of the norm ISO 9001:2015 The new ISO 9001 considers not only customers, but also other “interested parties”. Those have been analysed and assessed by Lahmeyer. Topics such as risk management, change management and knowledge management also play a vital role. The new norm maintains the process-oriented approach and requires “risk-based thinking”. Lahmeyer considered these topics and has included respective measures into its processes.“The new standard places new demands,” says Volker Rühl, Quality Officer at Lahmeyer International. “By being certified pursuant to DIN EN ISO 9001:2015, we will assure quality in accordance with valid international standards – a major step for us and the company’s future.”As an international company of consulting engineers, Lahmeyer offers a wide range of planning and consultancy services. The main fields of activity are complex infrastructure projects in the Energy, Hydropower and Water Resources Sectors as well as in Building and Transportation. With origins dating back to 1890, the company has grown into one of the leading international companies with project experience in 165 countries. Since December 2014, Lahmeyer belongs to Tractebel, and thus is part of the ENGIE Group.Lahmeyer International GmbH Ralf kleine Brörmann Manager Marketing Communications Friedberger Straße 173 D-61118 Bad Vilbel, GermanyPhone: +49 6101 55 1714 Fax: +49 6101 55 1785 ralf.kleinebroermann@de.lahmeyer.com

You can edit or delete your press release Quality Management – Lahmeyer successfully certified according to the new norm DIN EN ISO 9001:2015 here

05-22-2020 | IT, New Media & Software
CRMIT Solutions
ISO Certification
CRMIT Solutions has announced that it has been awarded the ISO/IEC 27001:2013 certification, which will see further support of the company's digital transformation solutions, products and services business. Bangalore, KA (May 21, 2020)- CRMIT Solutions, a pioneer in digital transformation and Customer360 solutions, have been re-confirmed the ISO/IEC 27001:2013 certification after the company successfully developed and implemented an integrated strategy for information security management to protect information assets, such as customer,
05-18-2011 | Business, Economy, Finances, B …
Coral eSecure Private Limited
ISO 27001/ISO 27002 Consultancy,ISO 27000,ISO 27000 Consultancy,Information Secu …
Coralesecure is a Information Security Management System (ISMS) – ISO 27001 Compliance. ISO 27000 Consultancy deals with maintaining the integrity and availability of organizational information and knowledge. Information Security Management System provides the experts on business management, and information security support and properly engages in executive communications Data loss, whether through cyber attacks or other forms of malicious intent can quickly bring an organization to its knees? The protection of
03-11-2011 | Business, Economy, Finances, B …
BookGenie
ISO certification for BookGenie
BookGenie, the publishing solution service provider was recently awarded the ISO 9001 and ISO 27001 certifications for its quality of service. Bureau Of Assessment Services (BAS), conducted the assessment and hence these certifications were awarded.These certifications were awarded based on the process qualities and data security adopted by BookGenie. ISO 9001 is awarded to organization with best process qualities and ISO 27001 is awarded to that organization that has best
11-23-2010 | Science & Education
Coral eSecure Pvt. Ltd
ISO 27001 India, 27001 training India ISO
Coral eSecure is information Risk Management advisory with specific focus on Information Security (ISO 27001, ISO 17799, PCI, COBIT, HIPAA, GLBA, and DPA), Business Continuity (BS25999) and ITIL/ IT Service Management (ISO 20000). Coral is the FIRST Indian consulting organization which provides an Integrated Management System Consulting, Consisting of ISO 27001, ISO 20000 and BS25999 – ALL THREE IN ONE! Coral provides Consulting, Assurance audit and Training to address these
10-25-2010 | Business, Economy, Finances, B …
Coral eSecure
ISO 27001 india, 27001 training india ISO, 17799 training india ISO, Compliance …
Our foundation of service delivery is based on sound research - thereby customers realizing definitive delight and Assurance resilience in their management system. We provide Consulting Services for ISO 27001 india, 27001 training india ISO,17799 training India ISO Security, BCM/BS25999, SAS 70, COBIT Implementation, Annual Compliance Check, Best Practices Implementation, & Quick Gap Analysis. It is a set of ‘best practices’ controls - management and systems - that enables
05-17-2010 | Industry, Real Estate & Constr …
SOL Inc
SOL Inc Upgrades its ISO Certification to ISO 9001:2008
Palm City, Fla., U.S.A. - SOL Inc is pleased to announce that the firm has renewed and upgraded its ISO Certification to ISO 9001:2008. While previously ISO 9001:2004 certified, SOL Inc invested in the upgrading of its quality standards and procedures at the start of 2010. A recent National Quality Advisors (NQA) audit revealed that the firm’s efforts have paid off and SOL Inc is now in compliance
Comments about openPR
Your portal is fast, simple, and easy to use. Others may have more functions but they also demand more editing time, you have to preformat the text in order to achieve a good result etc. I think openPR is really fantastic!
Andreas Knepper, wallmedien AG