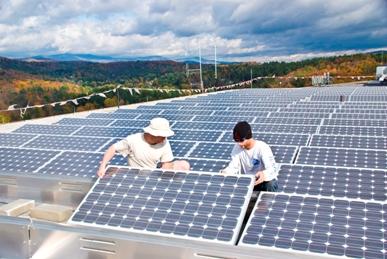 MONTPELIER, Vermont – July 22, 2009 – National Life Group announced today that it has received Silver Certification in the Leadership in Energy and Environmental Design, Existing Building (LEED-EB) program, sponsored by the U.S. Green Building Council, the nation’s leading non-profit authority for green buildings. National Life is the largest (543,992 s.f.) and oldest (1960) building in Vermont to receive LEED certification of any kind and the second existing commercial building in Vermont to receive a silver LEED-EB certification. “This is the culmination of a five-year campaign that has involved every single employee at National Life,” said Mehran Assadi, president and CEO of National Life Group.“This was a very ambitious goal,” he said. “Few people thought it was attainable. When we started we had no idea how we would do it. But we knew that we had to try – and that it was the right thing to do.”Governor Jim Douglas joined Assadi at Wednesday’s announcement and said that National Life’s building stands as a showcase for other businesses that want to see what they can do to reduce their carbon footprint.The three-building Montpelier, Vermont campus was certified LEED-EB Silver based upon a rigorous review of documented best practices that met and exceeded high-performance and environmental requirements. LEED-EB is a nationally accepted benchmark for environmentally friendly, energy-efficient operations and maintenance in existing buildings. The LEED Green Building Rating System is a voluntary, consensus-based national standard for the development of high-performance, sustainable buildings. The application highlighted the significant efforts of National Life employees to lessen the buildings’ impact on the environment including: • 2,500 lbs. of shredded paper are recycled each week and reused as animal bedding at a farm in East Montpelier; • 2,500 lbs. of food waste is composted each week; • 73% of the company’s solid waste is currently recycled; • More than 20% of employees, an average of 218 employees each month, use alternate forms of transportation to get to work, saving over 80,000 miles on average per month.Other initiatives cited in the application included: • The installation of new water-saving fixtures in the Main Building restrooms; • The replacement of aging chiller coils; • The installation of energy-saving light ballasts and bulbs; • The replacement of aging pumps and motors; • The installation of a power meter for monitoring electrical consumption; • The installation of a highly-insulated membrane roof on the Main Building; • The installation of a new 73kW solar photovoltaic system to help power the campus; • The installation of new, more efficient air conditioners in the data center.“At National Life we take great pride in our environmental stewardship. We view it as an outgrowth of our deep Vermont roots,” said Tim Shea, second vice president for facilities management who, along with Fred Barnett, director of facility operations, and Donna Householder, contracts administration, coordinated the LEED application.The LEED Green Building Rating System™ is a nationally accepted benchmark for the design, construction and operation of high performance green buildings. National Life joined the U.S. Green Building Council in 2007 and is a member of its Vermont chapter, the Vermont Green Building Network.The project was registered with USGBC in January of 2007. Work began in earnest in March 2008 on reviewing operations, modifying processes, implementing new green programs, and gathering the statistics and documentation necessary for the certification application. Partners in this effort included Hallam ICS, Capital Engineering and Dubois & King. The application was submitted to USGBC in December of 2008.PRESS CONTACT: Chris Graff (802-229-3882) cgraff@nationallife.com One National Life Drive Montpelier, VT 05604 www.nationallife.com

03-18-2019 | Industry, Real Estate & Constr …
MMH Structures Pvt Ltd
Order Building Material Online
BYOIndia , is an Online Shopping App to purchase building construction materials , serving in Faridabad. Generally ,BYO – Build Your Own is an App based Building Material Online marketplace , where our users can get or purchase building material from their near by suppliers with home delivery. Features BYOINDIA.com Gives you various features which gives you amazing shopping experience. Hundreds of vendors of Building Material suppliers in Faridabad are
11-27-2018 | Industry, Real Estate & Constr …
Market Research Hub
Building Curtain Wall
Looking at the current trends across the Building Curtain Wall market, a new study has been included to the wide database of Market Research Hub (MRH). The assessment is titled "Global Building Curtain Wall Market Insights, Forecast to 2025", which discourses the various market impacting factors like drivers, restraints and opportunities. Moreover, readers are informed about the competitive landscape which enlightens about the different players operating in the Building Curtain
05-11-2018 | Fashion, Lifestyle, Trends
Spartas
COMO® Reimagines Children’s Building
Press Release May 9, 2018, Munich, Germany- COMO®, the revolutionary new building blocks helping to inspire creative children worldwide, is live on global crowdfunding platform Kickstarter and raising funds to bring the project to life. COMO® represents the next generation of building blocks for children and enthusiasts alike. The best thing for parents and children is to build according to their own ideas and imagination. COMO® stands for ‘COmbine
01-18-2017 | Arts & Culture
JanKossen Contemporary
Building Mountains
New York, NY. JanKossen Contemporary is pleased to present Building Mountains, Minjung Kim’s first Solo Show in New York, opening on 2 February, 2017 and on view through 11 March, 2017. The work of Kim demonstrates her foundation in the traditional Korean calligraphic arts as well as the influence of mid-20th Century abstract expressionism, both of which celebrate the ability to convey energy and spirit through the manipulation of line
12-30-2010 | Associations & Organizations
Link Building King
Link Building King Launches Link Building Services
In the internet, when you want to earn much, you would need to ensure that your products stay at the top list and you have a good marketing strategy that can continuously attract customers. Online businesses like any other non virtual businesses we have need to survive in the form of a good internet marketing strategy. There are many applications and internet tools provided in order to maximize the resources
09-26-2008 | Industry, Real Estate & Constr …
Green Building Media
Green Building Media Videos
Green Building Media has installed a video component to their website, expanding the multimedia experience to the built environment in South Africa, involved in green building. Currently they are streaming in podcasts globally and are hoping to expand their selection to cover conferences and events, with speakers and experts presenting useful information on green techniques, designs, construction, and materials and products that are environmentally friendly. This just brings a whole new aspect
Comments about openPR
9 o'clock: discuss press release with client, 10 o'clock: submit release to openPR, within the briefest possible time release is published and displayed in a prominent place on openPR.de. I am thrilled!
Zehra Spindler, Calypso Now! - Communication Agency