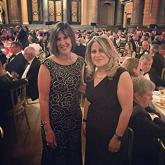 UKUD would like to congratulate Professor Janet Beer, who was elected president of Universities UK in August 2017, and is appointed Dame Commander on 29 December 2017. Dr Nagwa Radwan from UKUD had the pleasure of working with the University of Liverpool and meeting Professor Beer in person at the graduation ceremony of Mr Bill Clinton former Present of the USA and Mr Micheal Higgens President of the Republic of Ireland at Liverpool University. UKUD as a British Consultancy company involved in providing consultancy services to British universities in relation to developing international markets and attracting international students welcome this great news and considers Dame Beer as a leading professional with a huge leadership impact creating lasting personal and professional change impacting many woman in modern societies.KUD, a team of international educational consultancy specialists, was founded in 2007 by Dr Nagwa Radwan and a board of academics in the United Kingdom. Our head office is based in Nottingham, UK, with a network of agents operating across the Middle East. The directors of the company also regularly visit Middle Eastern countries to meet with students and potential partners. UKUD specialise in three main international activities:Developing international partnershipsProfessional trainingRecruiting international students to UK/USA universities by providing a professional and FREE service to students.NBV , Mercury House, northgate, Nottingham NG7 7FN iskander@usa.com

You can edit or delete your press release New Year Honours 2018: Professor Janet Beer made a dame here