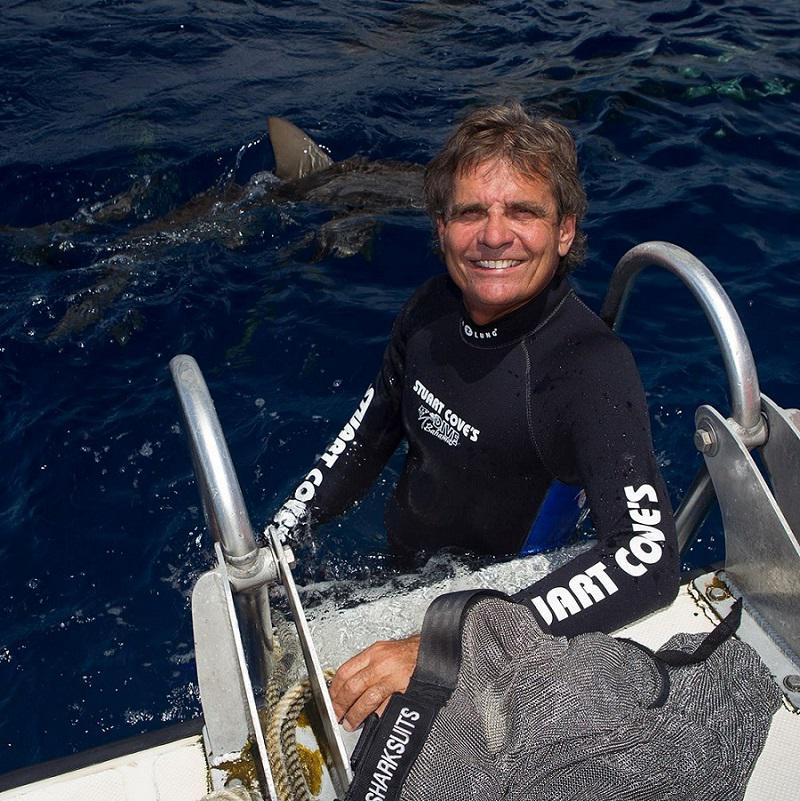 One of the most renowned dive centres worldwide is present with first own booth at boot 2018.Stuart Cove’s Dive Bahamas boot Jan. 20 – 28, 2018 Hall 3 Booth F71Nassau/Munich, January 03, 2018 – Diving James Bond film sets or gliding effortlessly along some spectacular reefs at high speed – Stuart Cove’s Dive Bahamas makes it possible.For the first time ever, the possibly most-established dive centre worldwide exhibits with an own booth at boot, the world’s largest water sports trade fair. “What we can offer to divers…” Stuart Cove explains the jump across the Atlantic Ocean, “fits the European wishes and needs more than ever. The country is safe, people are friendly, and the diving is spectacular.”Stuart’s prominence is based on his active participation in Hollywood blockbuster productions, which – whenever key scenes are filmed underwater – benefit from Stuart’s experience and the numerous film sets just in front of the dive centre in the Bahamas. Four James Bond movies as well as a dozen blockbusters with the engagement of world-famous actors were filmed around the Caribbean island. So whenever there’s a tiger shark on the movie screen, one can assume that the scene was taken in the Bahamas and with the help of Stuart Cove, even when it claims that the encounter happens by the shore of Malaysia…Various sets can be dived – even years after the shootings took place – around New Providence, home of the capital city of the Bahamas, in small depths around 20 metres. Some of the ships, “sunk by Dr. No”, are no more visited by stars and their doubles, but by scuba divers from all over the world. Stuart Cove knows all the locations of the ship and seaplane wrecks as well as their fascinating stories. He not only created famous film sets, but also amassed a great collection of more than 20 wreck diving sites without any support. Sunk at various locations, where they can be dived easily and safely, the wrecks now build artificial reefs for various marine animals. Plus, they are regularly visited by sharks, enabling close encounters with these gorgeous animals. Sometimes the predators might even bump into the divers in order to reach that guide dressed in a chain mail and offering snacks – small, frozen oddments of a fish fabric. These encounters are even more thrilling at night. Dive trips, often for several days, to the grounds of the Bahamas where tiger and hammerhead sharks live, are also offered by Stuart Cove’s Dive Bahamas.Those who would like to add some speed to their diving can rent a SeaBob scooter to fly alongside the fascinating walls, covered with abundant vegetation. If you’re not (yet) a certified diver, snorkel adventures are the perfect way to discover the marine world below, whereas SNUBA offers a tethered scuba experience by closing the gap between snorkelling and diving. You can even book a SUB-ride on an underwater “bike” with air-filled dome!More comfortable than ever, European divers can now choose from all of these exciting adventures and much more. Stuart is looking forward to his new guests from the “old world”: “The Bahamas as a whole and Stuart Cove’s Dive Bahamas specifically offer divers and non-divers diversity and constancy – simply the best diving in the Caribbean.”For further information, please go to www.stuartcove.com.Stuart Cove’s Dive Bahamas is the leading company for water-based activities in The Bahamas. Opened in 1978, the dive center was the pioneer in offering shark diving in The Bahamas and developed the first PADI Shark Awareness Specialty Course. Now operating with seven vessels, Stuart Cove’s enables divers not only to witness memorable shark encounters, but also to explore the best dive sites of New Providence, including steep vertical walls, shallow tropical reefs, ship and airplane wrecks as well as underwater filming sets. Diving operations are complemented by the company divisions Snorkel Bahamas and SUB Bahamas. Stuart Cove’s Fin Photo is Nassau’s only full service digital underwater photography and videography service. The success story of Stuart Cove’s was essentially determined by marine production works, since Stuart Cove himself collaborated in the production of the James Bond film “For Your Eyes Only” in the 70ies. Today, feature jobs of Stuart Cove’s Underwater Productions include four James Bond movies, “JAWS” and other popular blockbusters.Tourism Unlimited Christoph Hoppe Schmid-Wildy-Weg 46 81739 Munich Germany Phone: +49-89-673 78 619 stuartcovedive@tourism-unlimited.com www.tourismpressarea.com

06-17-2022 | Tourism, Cars, Traffic
Lightwater Cove
Lightwater Cove - An Oceanfront Sanctuary to Delight Your Senses
Ensconced in tall fir forest and full of sunlight, the farm and abundant orchards are both wild and artfully cultivated. Rooms offer refreshing ocean views and island-crafted king beds with organic bedding. From the first breakfast to the last sunset, Lightwater is a getaway to remember. Enjoy the experience of Lightwater Cove as every sense is illuminated - the stars dancing across the night sky, or the skies painted by the
01-31-2022 | Industry, Real Estate & Constr …
Sunbird Carpet Cleaning Glen Cove
unbird Carpet Cleaning Glen Cove: Mold Remediation Services in Glen Cove
Mold problems can harm not just your home or office, but they can also pose significant risks to your health. Unfortunately, it can be tricky to determine if you have a mold problem since they grow in the most unsuspecting places. This is where our team at Sunbird Carpet Cleaning Glen Cove comes in. We are the leading firm for mold remediation services in Glen Cove, having served numerous clients
02-08-2019 | Business, Economy, Finances, B …
Apex Market Reports
Global Metal Detector Market 2019 - Tesoro, Makro, Nokta, Treasure Cove, Big Sai …
A metal detector is an electronic instrument which detects the presence of metal nearby. Metal detectors are useful for finding metal inclusions hidden within objects, or metal objects buried underground. They often consist of a handheld unit with a sensor probe which can be swept over the ground or other objects. If the sensor comes near a piece of metal this is indicated by a changing tone in earphones, or
11-15-2017 | Politics, Law & Society
REPORTSANDMARKETS
Automotive Seat Cove Market Forecast to 2017 Detailed in New Research Report
About: Automotive Seat Cove Automotive Seat Cover market is valued at USD XX million in 2016 and is expected to reach USD XX million by the end of 2022, growing at a CAGR of XX% between 2016 and 2022. Try Sample Report @ www.reportsandmarkets.com/sample-request/emea-europe-midd... Geographically, this report split EMEA into Europe, the Middle East and Africa, With sales (K Units), revenue (Million USD), market share and growth rate of Automotive Seat Cover for
06-21-2016 | Industry, Real Estate & Constr …
D.R. Horton Southwest Florida
Luxurious North Naples living starts in the low-$400s at Barrington Cove
D.R. Horton’s Southwest Florida division invites the public to tour the professionally decorated model at Barrington Cove, where several homes are under construction for quick move-in. This gated community offers a rare opportunity to build a brand new home in a neighborhood setting in prestigious North Naples. Preserve and lake views are available at Barrington Cove, located just two miles north of Immokalee Road on Livingston Road.   Eight distinctive one- and
04-05-2016 | Industry, Real Estate & Constr …
D.R. Horton Southwest Florida
Barrington Cove offers luxury neighborhood living in North Naples
Located just two miles north of Immokalee Road on Livingston Road, D.R. Horton’s Southwest Florida division offers true luxury neighborhood living at Barrington Cove. This beautiful gated community in prestigious North Naples offers a portfolio of eight distinctive home plans starting at $402,990. With only 133 homesites, many overlooking one of several beautiful lakes, Barrington Cove residents enjoy the feel of a traditional neighborhood nestled among wooded areas and preserves.   The
Comments about openPR
9 o'clock: discuss press release with client, 10 o'clock: submit release to openPR, within the briefest possible time release is published and displayed in a prominent place on openPR.de. I am thrilled!
Zehra Spindler, Calypso Now! - Communication Agency