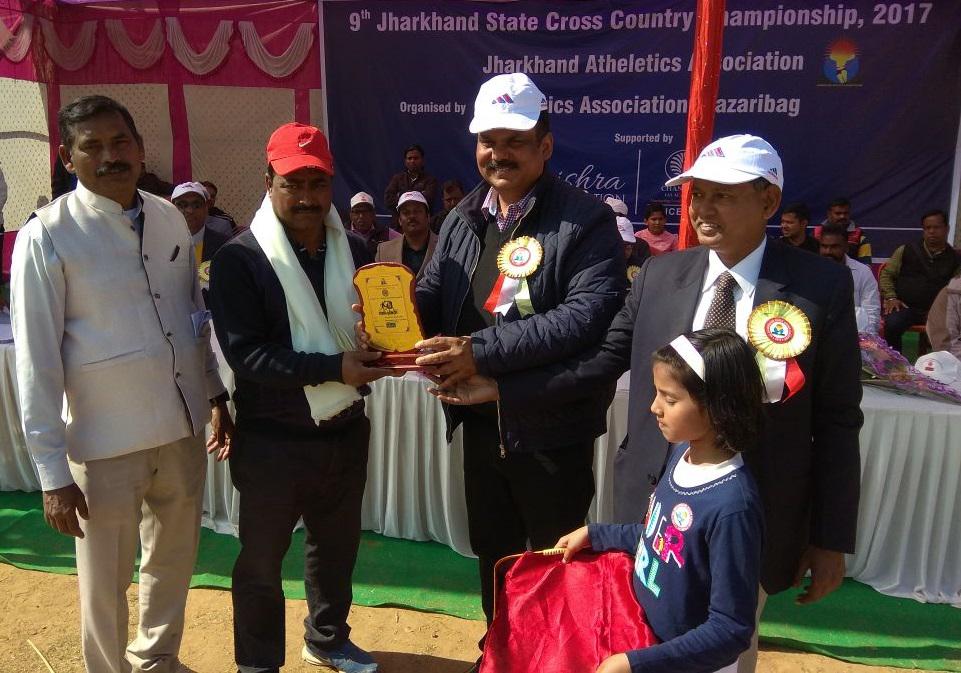 The sound of cheerful motivation filled the air for participants, right after the red flag waved kicking off the State Cross Country Championship at Hazaribagh. The event was organized by AK Mishra Foundation in association with Hazaribagh Athletic Association at New Stadium, Hazaribagh on December 27th 2017. With 18 districts and over 500 participants, Hazaribagh youth marked glory for the district followed by participants from Ramgarh as runner-up winners. While addressing the participants and audience at the event, Success Guru AK Mishra, Founder of Chanakya IAS Academy and AK Mishra Foundation, shared his nostalgia associated with sports saying, “I am an academician and understand the facts related to education but this alliance with sports associations is a big step for me. My connection with sports is not from today but since very tender age I have been an active sports person and this feeling of sportsmanship gives me an enthusiasm to make something extraordinary for the youth of my country. And this feeling has helped me establish multiples centres of Chanakya IAS Academy across India”. Success Guru AK Mishra also said that, “I have visited many countries and I can proudly say that our Indian sportspersons are highly respected at international platform. That’s where I felt the urge to join hands with a sports association at the district where I get my roots from, and put in my efforts to take forward sports & sportsmen to a finer level in India and even International. AK Mishra Foundation has taken this initiative to encourage the youth to involve in sports activities. Apart from Sports, AK Mishra Foundation will also be working on its other modules for the welfare of society, like, Education, Health, Art & Culture and Skill Development. We shall now regularly be working and monitoring the needs of people in the district, along with special focus on establishing a sports club here, to nurture the hidden talent of youth and prepare them for National and International Sports Events”. Secretary of District Sports Association, Shabir Ansari also graced the seminar with his presence and said, “Sports are an exceptional physical activity and should be highly promoted. If I talk about Jharkhand in specific, we have a lot of employment opportunities in the state, but this is not the case with sports. I would like to thank AK Mishra sir to bring sports at this level for our state. Our youth will surely benefit professionally”. Conciliation ceremony was held at New Stadium itself where the winners under different categories were awarded with medals by Success Guru AK Mishra and other esteemed chief guests at the event. AK Mishra also honored body builder from the district, Sunny Chhetri who had won a gold medal at Bangkok, with a Shawl and a memento. Other esteemed personalities also witnessed the event as panel of Chief Guest, included Vice Chairman of AK Mishra Foundation - AK Pandey, Chairman Hazaribagh Athletic Association - Pradeep Prasad, Secretary Hazaribagh Athletic Association - Ajit Sahu, Sports officer - Shabir Ahmed, Chairman Olympic Association Ranchi - Madhukar Pathak, Chairman Olympic Association Dhanbad - B C Thakur, Secretary Olympic association - C Das, Kaleshwar Gop (Hockey), Prahlad Singh(Swimming), Rakesh Singh(Athletics, Ranchi), Head Secretary Athletics - C D Singh and many other eminent people graced the event with their presence. Spokesperson for the event shared that, “Participants from the age group of 14–20 years, represented 18 districts at the Cross Country Championship. The Race track heading towards the finishing stretch was to be completed by participants, and the different finishing points were set by the organizing committee according to the age group of participants. It was a tight battle for the Hazaribagh youth to win the race where every individual participant gave their best. Winners and out performers for the state cross country championship will get a chance to participate and represent Jharkhand in National cross country race at Goa”. Further he added, “What I loved most about the Cross Country Championship was that it wasn’t about racing but to challenge you to do something different. It was also an opportunity for lots of runners to return to their roots and sports they’ve played as a child. It feels good to see the youth coming up with enthusiasm and taking up the challenges”.Chanakya IAS Academy which was established in 1993 has given more than 2500 selections in IAS, IPS, IFS & other central services. The academy with the help of students, popular universities, specialist teachers, thinkers, bureaucrats and the employees continues to work hard for the betterment of students and the society by helping them overcome their fears, and realizing their true potential and ultimately leading them to a successful life. Today the academy has 21 branches across India.Chanakya IAS Academy, Hazaribagh Branch, 3rd Floor, Kaushaliya Plaza, Near Old Bus Stand, Hazaribagh (Jharkhand)-825301 Ph: 9990767766

03-22-2021 | IT, New Media & Software
DigitalAkki Inc.
Ankit Mishra Shares How his company helping small & Medium Business
Ankit Mishra, Founder Of i-Kart Pvt. Ltd. and DigitalAkki Inc. one of the leading IT, eCommerce, and Automation Company in India. Currently, Ankit Mishra and company is working with startups and small businesses in India, the US, and the UK and providing IT and technology support, so that every business can grow smoothly without spending much budget on their marketing and technology part. Here is how Ankit Mishra is Helping Small
03-22-2019 | Science & Education
PR 2019
Rishihood University appoints Kamlesh Mishra as is it new VC
Rishihood University appoints Kamlesh Mishra as is it new VC New Delhi: Kamlesh Misra joined Rishihood University as vice chancellor. The university is set up by an IIT graduate and philanthropists to focus on social impact in the areas like healthcare, entrepreneurship, education and creativity. The campus is in Sonipat, the upcoming education hub of Delhi NCR. Mr Kamlesh Misra was earlier the vice chancellor of Auro University in Surat and Ansal
05-18-2017 | Science & Education
JMA Pilani Rajasthan
Jamuna Mishra Academy - JMA Top Ranking among Pilani Best Schools in India today
JMA which has been making rapid strides in early childhood education derives its inspiration from the quote “Information is just bits of data while knowledge is putting them together and wisdom is transcending them.” Matter of pride that in Board of Secondary Education Rajasthan RBSE 2017 Class XII, the very second Batch of Jamuna Mishra Academy - JMA Pilani has secured 100% Result among the schools of Pilani. Total Students: 18
09-19-2011 | Science & Education
JMA Pilani Rajasthan
Celebrations Galore at Jamuna Mishra Academy - JMA Pilani Rajasthan
Located in the heart of Shekhawati region of Rajasthan, Pilani is well known in India today for various top ranking educational institutions, CSIR Laboratory CEERI as well as the upcoming BrahMos Missile Assembly Project unit. Jamuna Mishra Academy – JMA established in the year 2004 which has been making rapid strides in early childhood education is presently one among the top ranking and most sought after schools at Pilani Rajasthan. JMA
08-18-2011 | Science & Education
JMA Pilani Rajasthan
Pilani Rajasthan Jamuna Mishra Academy - JMA Celebrates Grandparents Day
The grandparents may have silvery hair but their hearts always have been golden. One can say that a little bit of parent, a little bit of teacher, a little bit of best friend all rolled into one is the grandparent. It is essential that this generation of children in India today realize that Grandparents are indeed our heritage as well as essential members of our families and communities. Every child has
07-18-2011 | Science & Education
JMA Pilani Rajasthan
Free Medical Camp at Jamuna Mishra Academy - JMA Pilani Rajasthan
It is known that good health is equal to a thousand boons and since the children of India today represent India tomorrow, ensuring their healthy growth and development is indeed of prime concern. Children absent from school for chronic health conditions risk falling behind in their study schedule. Children with untreated vision problems cannot track printed letters and words across a page and learn to read. Further, oral disease in children
Comments about openPR
I can't but agree to the positive statements about your portal: easy to use, clear layout, very good search function, and quick editing!
Jens O'Brien, Borgmeier Media Communication