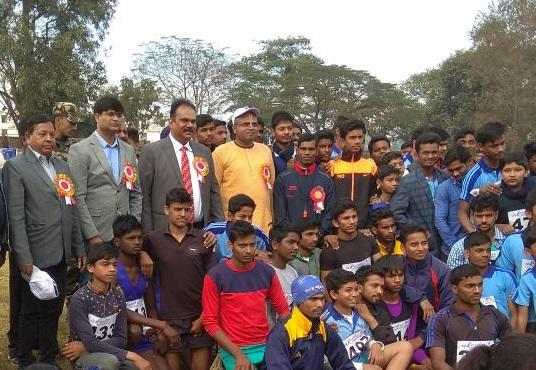 AK Mishra foundation & Chanakya IAS Academy in collaboration with Hazaribagh Athletic Association, (an important wing of Hazaribagh Olympic Association), organized District level Cross Country Race 2017 on 19th December 2017. The District Cross Country Race held at Hazaribagh with over 35 schools and 350 participants. Students were allotted running stretch as per their age groups categorized by the organizers.
Anoop Birthare, SP of Hazaribagh, in the opening ceremony addressed the participants and said, ‘it is a crime to keep an athlete away from sports. We must rise above our age old thought process. AK Mishra Foundation has taken this great initiative of organizing this athletic meet, which until now has never been organized in such small town like Hazaribagh. Bringing such high spirit activities at these areas is highly beneficial for our young generation. We, at Hazaribagh administration will always support AK Mishra Foundation for such good causes’.
Success Guru AK Mishra while addressing the participants also shared his views stating that, ‘involving in sports activities inculcates a never say die attitude in our personality and we at AK Mishra Foundation have strongly enforced sports as a part of our module and working on it not just in Hazaribagh but in all other districts of Jharkhand to reach out to every budding talent and give them an opportunity to be a part of such activities”.
While shedding light on importance of sports in our lives, Success Guru AK Mishra also shared that ‘it is our duty to make our life free from worries, and our active involvement in such actives not only helps us stay fit physically but keeps us mentally relaxed and contented too”. He encouraged the participants to bring out their hidden potential and give their best to win the race and get eligible to participate in the state level races which are yet to be organized in the later phases”.
Chairman & Director of AK Mishra Foundation along with SP of Hazaribagh, Anoop Birthare waved the flag to the students who started the race from Hazaribagh High School. Other esteemed panels of Chief guests also witnessed the event included Secretary of District Sports Association - Shabir Ansari, Vice Chairman of AK Mishra Foundation - AK Pandey, Karate coach - Uday Kumar, Chanakya IAS Academy’s Vice Chairman - Vinay Mishra and teachers from all the participating schools. Closing ceremony was held at Hazaribagh High School itself where the race ended after a halt at the Jheel Area. Winners under different categories were awarded with medals by AK Mishra and other esteemed chief guests at the event.
Spokesperson for the event shared that, ‘AK Mishra Foundation and the man behind it, Success Guru AK Mishra, envisions a transformed India with a strong belief that ‘Sports encourage and help us develop a winning attitude’. Therefore, sports is an important module followed by AK Mishra Foundation for the benefit of our young generation. This district level race is just a beginning towards a better tomorrow. Our winners shall soon represent Hazaribagh in State Cross Country Championship and then the National Championship before going International. We are proud of our young generation and looking forward to bag some medals at National and International races’.

Chanakya IAS Academy which was established in 1993 has given more than 2500 selections in IAS, IPS, IFS & other central services. The academy with the help of students, popular universities, specialist teachers, thinkers, bureaucrats and the employees continues to work hard for the betterment of students and the society by helping them overcome their fears, and realizing their true potential and ultimately leading them to a successful life. Today the academy has 21 branches across India.

04-15-2019 | Science & Education
Chanakya IAS Academy
Students of Chanakya IAS Academy once again brought home the beacon – 280 plus …
Union Public Service Commission has declared the final result of Civil Services Examination 2018 on 5th April 2019. Approximately 3 lakh candidates appeared for the Civil Services Preliminary Examination, out of which 759 candidates made it to the list, conquering all the 3 stages of the examination. On a quick estimate, out of these total 759 candidates, 280 plus candidates spread across different cities in India are the students of
05-14-2018 | Science & Education
Chanakya IAS Academy
Catch Rishi Raj (AIR 27, CSE 2017) live on Chanakya IAS Academy’s Facebook and …
With the declaration of CSE 2017 results, there is a wave of enthusiasm amongst the candidates who are going to appear in Civil Services Examination in the coming years. To help those aspirants excel in their quest with the right guidance, motivation, and support, Chanakya IAS Academy is organizing an exclusive Live Streaming with Rishi Raj, All India Rank 27 in CSE 2017. CSE aspirants can catch him live on
12-29-2017 | Sports
Chanakya IAS Academy
Hazaribagh Youth Outshone at AK Mishra Foundation’s State Cross Country Champi …
The sound of cheerful motivation filled the air for participants, right after the red flag waved kicking off the State Cross Country Championship at Hazaribagh. The event was organized by AK Mishra Foundation in association with Hazaribagh Athletic Association at New Stadium, Hazaribagh on December 27th 2017. With 18 districts and over 500 participants, Hazaribagh youth marked glory for the district followed by participants from Ramgarh as runner-up winners. While
12-18-2017 | Science & Education
Chanakya IAS Academy
AK Mishra Foundation is going to organize district level Cross Country Race at H …
AK Mishra Foundation, which is one of the wings of Chanakya Academy for Education and Training Pvt. Ltd. is working with the sole purpose of overall development of the youth. The Non-profit organization, AK Mishra Foundation primarily focuses on 5 key areas; sports, Employment, Education, Health, Art & Culture and Skill Development. The organization is going to kick start the sports engagement amongst youth with a district level Cross Country
02-17-2017 | Health & Medicine
AK Mishra Foundation
Free Health Camp for elderlies by AK Mishra Foundation in association with Healt …
AK Mishra Foundation in association with Healthy Aging India and Department of Geriatric Medicine, All India Institute of Medical Sciences (AIIMS), New Delhi will organize a free health camp for senior citizens on 18th and 19th February at Vinoba Bhave University, Hazaribagh, Jharkhand. Vinoba Bhave University is a renowned university in Jharkhand which provides impeccable education opportunities to students at Hazaribagh. The event will go from 9am to 5pm on
12-19-2016 | Science & Education
Chanakya IAS Academy
Personalized interactive and counseling session by Success Guru AK Mishra in Haz …
Choosing a career after 12th and graduation is the most challenging task for students as the decision ultimately paves their way further. With an aim to help students lead and excel in their chosen fields, Chanakya IAS Academy, Hazaribagh branch, brought an opportunity for students and parents of the concerned students to interact with Success Guru AK Mishra in a free personalized counseling session. The 3 days session was divided
Comments about openPR
Your portal is fast, simple, and easy to use. Others may have more functions but they also demand more editing time, you have to preformat the text in order to achieve a good result etc. I think openPR is really fantastic!
Andreas Knepper, wallmedien AG