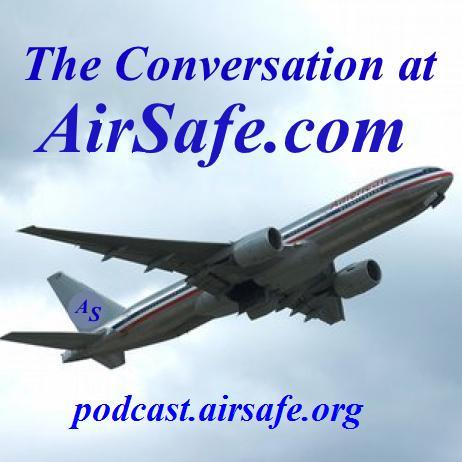 The Conversation at AirSafe.com Podcast

As the investigation into the crash enters its third week, ships, planes, and submarines continue to search the Atlantic Ocean for wreckage, for the bodies of the victims, and especially the black boxes.Since the June 1st crash of an Air France A330 in the Atlantic Ocean near Brazil, Ships,planes, and submarines from Brazil, France, the US, and other countries have searched for clues to the crash in a large area of the Atlantic ocean between Brazil and Africa. So far, a wide variety of wreckage, and the remains of about 50 of the 228 occupants, have been recovered. Yet to be recovered are the aircraft's black boxes, the cockpit voice recorder and flight data recorder, that may hold the keys to understanding why the aircraft crashed.Air France flight 447 was a scheduled international flight from Rio de Janeiro to Paris, and crashed in the Atlantic Ocean in an area roughly 600 miles, or 960 kilometers, off the northeast coast of Brazil. Several areas of suspected aircraft debris were also found near the estimated position of its last radio communication. All 216 passengers and 12 crew members, representing 32 nationalities, are missing and presumed dead.There were no distress calls or other unusual communications from the flight crew. However, 24 automatically generated maintenance messages were transmitted from the plane shortly before the crash. According to Air France officials, these messages indicated that there were several problems with the aircraft, including some unspecified problems with the electrical system and cabin pressurization system.The current weather conditions in the areas around the debris fields, and the depth of the ocean in those areas, will complicate the recovery of the black boxes or of any debris from the ocean floor. The Brazilian navy estimates the ocean in the vicinity of the suspected area of the crash is between 2,000 and 3,000 meters deep. The French government has sent a ship carrying submersibles that can operate to a depth of six kilometers or about 20,000 feet.This is the first time that passengers have been killed in an A330 since this model entered airline service in 1993. This is the eighth time since 1970 that passengers have died while traveling on an Air France aircraft. The previous fatal event was the July 2000 crash of a Concorde near Paris.The investigation is headed by the French Bureau d'Enquêtes et d'Analyses (BEA), the equivalent of the NTSB in the US or the AAIB in the UK, and the BEA will be assisted by several other nations, including Brazil and the US. For updates on this investigation, including the search for the black boxes, and for the latest news from AirSafe.com, visit http://brazil.airsafe.org.AirSafe.com provides the public with factual and timely information on airline safety and security events, as well as information about fear of flying, baggage rules, filing airline complaints, and other airline issues that concern the flying public.AirSafe.com Foundation 24 Roy St., #302 Seattle, WA 98109 206-300-8727 tcurtis @ airsafe.com

09-19-2009 | IT, New Media & Software
AirSafe.com, LLC
AirSafe.com Foundation's Dr. Todd Curtis to Present at Bird Strike North America …
Sep 10, 2009 – Dr. Todd Curtis of the AirSafe.com Foundation will present the paper "Social Media, Bird Strikes, and Aviation Safety Policy" at the 2009 Bird Strike North America Conference in Victoria, Canada the week of 13 September 2009. Dr. Curtis, who created the site AirSafe.com in 1996 and helped to launch the web site of Bird Strike Committee USA at Birdstrike.org in 1999, will demonstrate the potential social media
03-17-2009 | Logistics & Transport
AirSafe.com, LLC
Fixing the Problem That May Have Caused the British Airways 777 Crash
March 17, 2009 - Recent findings from the AAIB accident investigation point to ice buildup in the fuel system as the key factor in the January 2008 crash of a British Airways 777 in London. On March 11th, 2009, the NTSB called for a redesign of the fuel system, and for the affected aircraft to have those changes installed within six months after the redesign is complete. In the January 2008
03-04-2009 | Logistics & Transport
AirSafe.com, LLC
Do Plane Crashes Happen in Threes? - Sometimes, Yes
March 3, 2009 - Do plane crashes happen in three? It may seem like a superstitious belief and not at all scientific, but AirSafe.com creator and leading aviation safety authority Dr. Todd Curtis says that there may be more than a little bit of truth behind that belief. On 25 February 2009, a Turkish Airlines 737 crashed in Amsterdam, killing nine passengers and crew members. This crash also
01-19-2009 | Logistics & Transport
AirSafe.com, LLC
Ditching of a US Airways A320 on the Hudson River in New York
Jan 18, 2009 - On 15 January 2009, a US Airways A320 experienced a loss of power to both engines shortly after taking off from New York's LaGuardia Airport. The crew was able to successfully ditch the aircraft in the Hudson River near midtown Manhattan. Reportedly, the aircraft encountered a flock of birds shortly after takeoff. The aircraft reached an maximum altitude of about 3200 feet before it began to